The world has been shocked by North Dakota’s violent reaction to the anti-oil pipeline resistance at Standing Rock. For the better part of a year, people have watched via social media, then increasingly on conventional media outlets, as heavily armed law enforcement officers and private contractors attacked unarmed civilians with rubber bullets, mace, tear gas, batons, and water cannons in sub-freezing temperatures. 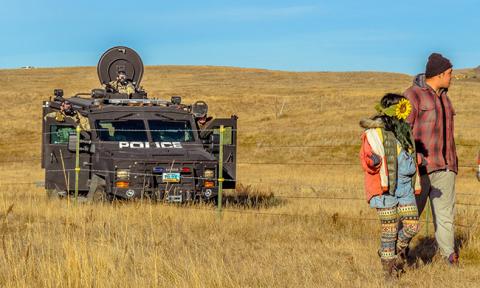 Water protectors, as the demonstrators call themselves, have been dragged from prayer ceremonies, injured, and arrested. More than 100 have been hospitalized.

In January the National Guard confirmed it has positioned the platform of an Avenger missile system near the Dakota Access Pipeline construction site; it will be used for surveillance, according to Morton County Sheriff’s Department spokesman Rob Keller.

The force used against unarmed civilians has been extreme, even by military wartime standards. The concussion grenades that have allegedly caused some of the most serious wounds in North Dakota were banned in Iraq for fear of harming civilians, U.S. Army veteran Griz Grzywa told YES! in an interview at Standing Rock. Grzywa served as an Army Ranger for 15 years, including one tour of duty in Somalia and three tours in Iraq. He had come to Standing Rock to help shield the demonstrators from harm. “They are using a level of force against women and children here that our military would hesitate to use,” he said.

Indeed, Standing Rock has revealed this long-standing and violent dynamic to a new generation of observers, as the U.S. government and corporations use military-level force while unarmed tribal people protest with prayer.

For Native people, the brutality is nothing new. It is a generations-old policy, according to Wendsler Nosie Sr., leader of Apache Stronghold, a group that seeks to protect the sacred Arizona landscape Oak Flat from mining. They are doing so by camping there and holding supporting actions throughout the country. “Federal and state involvement with us has always been military, from the days when we Native people were prisoners of war until this very day,” says Nosie.

The second half of the 20th century saw many examples of state-sanctioned violence toward Native people. During the 1960s and 1970s, unarmed members of Northwest tribes were shot at, clubbed, gassed, and arrested—notably at Frank’s Landing, in Washington state—while seeking recognition of treaty-guaranteed fishing rights. For decades, law enforcement officers have roughed up and arrested protesters from Pine Ridge Indian Reservation as they try to shut down the town of Whiteclay, Nebraska. With about a dozen residents, the town exists almost exclusively to bootleg alcohol onto the dry reservation, setting off a cascade of physical and social ills and crime.

Just under 10 years ago, South Dakota sent its entire on-call contingent of highway patrol to help local police make arrests on the Yankton Sioux Reservation. Tribal members and others were demonstrating peacefully against a concentrated animal feeding operation that was being constructed on their homeland against their wishes. And in Montana in 2012, after Northern Cheyenne spiritual teacher Mark Wandering became lead plaintiff in a voting-rights lawsuit, police traffic stops of Native people in the area spiked.

Natives are not just arrested and abused by police; they are killed by law enforcement officers at a higher rate than any other group. Mike Males, senior research fellow at the Center on Juvenile and Criminal Justice, analyzed Centers for Disease Control and Prevention data and found that from 1999 to 2014, Natives aged 20–24, 25–34, and 35–44 were three of the top five groups to die during arrest or while in custody. The other two groups were African Americans 20–24 and 25–30.

In April 2016, Claremont Graduate University scholars Roger Chin, Jean Schroedel, and Lily Rowen announced research showing that in six states—Mississippi, South Dakota, Idaho, Washington, Alaska, and North Dakota—death rates for Native Americans were higher than for any other group. Chin adds that in 79 percent of the cases over a recent 15-month period, the Natives were shot or died in the custody of off-reservation police.

“The violence toward us is embedded in our history,” says Nosie. “When we started the Oak Flat encampment, right away military-type planes began flying overhead.” Indigenous Environment Network (IEN) reports that in May 2016, U.S. Army Corps of Engineers representatives showed up in combat gear to discuss Missouri River issues with Yankton Sioux officials. When tribal members said this was inappropriate, the Corps representatives stalked out of the meeting, according to IEN. According to Nosie, using military equipment and appearing in battle gear is meant to send a message: “We did it to you before, and we can do it again.”

Meanwhile, a North Dakota legislator wants to make it easier for ordinary citizens to injure or even kill protesters. Keith Kempenich and six co-sponsors, all Republicans, have submitted a bill that Kempenich told the Bismarck Tribune is a response to frustrated constituents who oppose the anti-DAPL movement, which has at times spilled into public roadways. If the measure passes, motorists who “negligently” hurt or kill anyone obstructing traffic “would not be held liable for any damages.”

Well-known North Dakota civil rights attorney and former U.S. attorney Tim Purdon, of the firm Robins Kaplan, calls the bill a “new low” that “legalizes negligent homicide with a vehicle of a certain class of people.” Whether the bill passes or not, he says, “It was introduced to send a message that we are going to dehumanize those with whom we disagree.” Purdon says the measure has unintended broader consequences, since it in fact allows anyone driving negligently—while drunk or texting, for example—to kill or maim.

Throughout the months of confrontations at Standing Rock, the water protectors there have welcomed media coverage and have used social media to get their story out in their own words. They were glad to see the surge of media attention to their movement during December, when more than 2,000 veterans arrived.

Though publicity does not mean immediate solutions, it can support ongoing indigenous struggles. These are increasingly successful, according to Native leaders, as tribal members and their allies throughout Indian Country work to protect land, water, culture, and sacred places.

Producing in-depth, thoughtful journalism for a better world is expensive – but supporting us isn’t. If you value ad-free independent journalism, consider subscribing to YES! today.
Stephanie Woodard wrote this article for YES! Magazine. Stephanie has covered Indian Country for more than 15 years for Native-owned Indian Country Today Media Network, as well as for In These Times and other national publications. The Center for Investigative Reporting and the Fund for Investigative Journalism have supported her work. The Native American Journalists Association, of which she is an associate member, has recognized her with its top annual prize, the Richard LaCourse Award.