States Have Real Election Problems. Voter Fraud Isn’t One of Them.

State election officials want to see Washington help out with their real issues or get out of their polling booths. 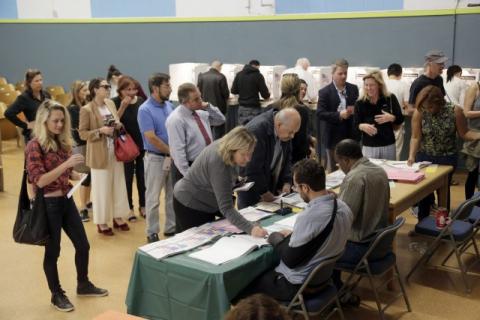 President Donald Trump’s inflammatory immigration executive order promises to command headlines for the foreseeable future. But he appears to have backed away, at least for the moment, from issuing a directive to launch a federal investigation into voter fraud, a national scandal in his own mind if not in reality. It is unclear whether Trump plans to wait for attorney general nominee Jeff Sessions to officially arrive on the scene or for a more fortuitous time to inject additional mayhem into what was a frayed but functioning system of government before he took office.

Trump apparently believes in voter fraud, but voter fraud in the United States is all but nonexistent. Loyola Law Professor Justin Levitt’s survey of federal elections from 2000 through 2012 uncovered 31 alleged (not confirmed) instances of voter impersonation out of more than one billion votes cast. Affronted by the fact that Hillary Clinton won nearly three million more votes than he, however, Trump insists on voter fraud as if the legitimacy of his presidency depended on it. But as John Adams said, “Facts are stubborn things; and whatever may be our wishes, our inclinations, or the dictates of our passion, they cannot alter the state of facts and evidence.”

The latest entry in the growing canon of literature debunking voter fraud comes courtesy of an East Lansing, Michigan, consulting firm. The Anderson Economic Group recently released a deep “forensic analysis” of the Michigan 2016 presidential vote. Researchers studied data from the last two presidential elections from every county in the state in an effort to uncover evidence of voter fraud. The firm also probed the data for shards of evidence to buttress President Trump’s claim that three to five million undocumented people voted illegally, giving Hillary Clinton her decisive 2.8 million-vote edges in the popular tally.

The firm found that “no evidence” of “systematic tampering or hacking of voting machines” or conspiracy or fraud among election officials [that] resulted in vote tallies altered” to give the Republican presidential candidate a Michigan victory. The researchers also concluded there was “no evidence that indicates a large number of ineligible, foreign-born residents voted for the Democratic candidate in Michigan in 2016, if “large number” means Michigan’s share of “3 to 5 million” across the United States.” The January report followed one Anderson conducted in December, both studies arriving at the same conclusion. The 2016 election, concluded Patrick Anderson, the firm’s CEO, “was the most vetted presidential election in Michigan history.”

State election officials from across the nation have disputed the president’s continued insistence on widespread voter fraud. “If he really thinks the election was rigged to that extent,” said Massachusetts’ Democratic Secretary of State William Galvin, “why don't we do it again, see if he wins?” Arizona’s Republican Secretary of State Michelle Reagan noted that state officials “can say with … confidence that we didn’t have widespread voter fraud in Arizona.” According to a tally by New York University Law School’s Brennan Center, 22 secretaries of state did not find any evidence of voter fraud in the 2016 presidential election in their states.

The Republican and Democratic officials charged with overseeing state election systems do not share Trump’s obsession with fraud. What really bothers state election officials, Connecticut Secretary of State Denise Merrill told The American Prospect, is that repeated claims about voter fraud may persuade people that their vote does not count. “Our biggest concern is the conspiracy theory atmosphere it breeds about elections,” says Merrill who also serves as the president of the National Association of Secretaries of State. “That is very dangerous.”

What do election officials worry about? According to Merrill, election officials are “scrupulous” about the need to maintain accurate voter lists. A Pew Charitable Trusts Electronic Registration Information Center voter data-sharing project allows the 21 participating states and the District of Columbia to crosscheck and update their records against departments of motor vehicles, national changes of address, and Social Security death databases.

Voter fraud is often erroneously equated with such election administration issues as voter rolls maintenance. Being registered in one or more states is can be a problem, one that Trump family members and administration officials, including White House chief strategist Stephen Bannon, White House Press Secretary Sean Spicer, presidential daughter Tiffany Trump, and conservative activist Gregg Phillips, a so-called “voter fraud expert,” discovered recently after Trump expressed concern about the issue. Subsequent news investigations revealed they were registered to vote in more than one state—a common occurrence when someone relocates across state lines.

“Most voters don’t realize that it is their responsibility to update their voter status if they move to another state,” Merrill says. “It’s really not a problem unless people are voting in more than one state.” She adds, “That is a problem that virtually never happens.”

Election modernization is another major concern. The last time state election officials received a major infusion of funds to upgrade voting equipment was in 2002, when Congress passed the Help America Vote Act after the disputed 2000 election. Most states are saddled with voting machines that are more than a decade old. In some states, replacing voting machines is not a high priority in tight fiscal times.

Since the 2016 election, each party has had its own distinct fears about the accuracy of the vote.

Since the 2016 election, each party has had its own distinct fears about the accuracy of the vote. Following the furor over hackers linked to the Russian government penetrating the Democratic National Committee’s computer networks, Jeh Johnson, President Obama’s Department of Homeland Security chief, designated state election systems as critical infrastructure, placing them in the same category as nuclear power plants, dams, and electric grids. However, Merrill says, Obama administration officials did not understand that elections are a highly decentralized process (with many jurisdictions still using processes do not rely on the internet, and some still using paper ballots) and there was not as much at risk as federal officials feared. (For his part, Johnson said the designation was not a “federal takeover.”) Similarly, the Trump administration’s determination to root out fraud despite voluminous evidence to the contrary has exasperated secretaries of state.

As states increase their reliance on electronic systems (jurisdictions in more than 30 states currently use electronic poll books), however, cybersecurity will become a more pressing issue and state election officials will continue to compete with other government agencies for scarce funding. Nevertheless, it is the baseless claims of voter fraud that continue to dominate the discussions of voting in America.

In states like North Carolina and Kansas, the issue has produced full-scale political warfare and executive branch overreach. In North Carolina, a raft of fraud complaints by the state Republican Party that would not have affected the outcome of the gubernatorial contest between Republican Pat McCrory and Democrat Roy Cooper were rejected by a state election board. Most of the procedures that the state has implemented have been widely condemned as tantamount to voter suppression. In Kansas, The Intercept recently reported that after more than a year of trying to ferret out illegal voters, Secretary of State Kris Kobach, who has been zealous in his pursuit of “so-called” fraud, came up with six cases of alleged voter fraud, mostly involving senior citizens. Two have been dropped.

What has become difficult for voter fraud fabulists to refute is that their baseless fears about election administration security have led to measures that threaten the voting rights of minorities, senior citizens, and students—groups that tend to favor Democratic candidates. The alternative fact known as voter fraud has become a Republican incendiary device built to degrade and, if needs be, explode institutions and rights that once were the envy of the world’s democracies in a bid for a permanent GOP political power, bolstered by a thin veneer of electoral legitimacy.