Sens. Bernie Sanders and Ted Cruz debated the future of health care in the US Tuesday night. CNN's Reality Check Team of reporters, researchers and editors vetted the claims, rating them true, misleading or false. And the winner is ... 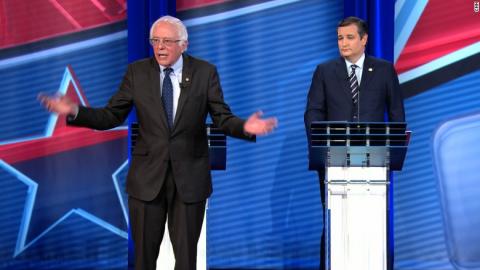 "The United States is the only major country on earth not to guarantee health care to all people as a right," Sanders said.

This is something that Sanders also said previously throughout his presidential campaign.

The World Health Organization issued a report in 2014, saying, "the USA is currently the only high-income country without nearly universal health-care coverage."

As we determined before, based on the WHO report, our verdict is true.

Describing public opinion about Obamacare, also known as the Affordable Care Act, Sanders said, "the overwhelming majority of the American people say, 'Do not simply repeal the ACA, make improvements.' "

A CNN/ORC poll taken in the second week of January found a large majority of Americans are opposed to a simple repeal. Fifty-five percent supported repealing parts of the law if -- and only if -- a replacement could be enacted at the same time. More than one-fifth of Americans (22%) want Republicans to abandon all plans to repeal, and leave the existing ACA in effect.

A survey taken after the election and published in December 2016 by the Kaiser Family Foundation, showed only 26% of Americans favor repealing the ACA in full. Of the remaining three-quarters who do not support repeal, the overwhelming majority do say they support making changes to the law -- though they define these changes differently: 30% of those surveyed hoped to expand on the existing ACA; 17% wanted to scale back on what the ACA does.

Just 19% wanted to keep the ACA in its present form.

We rate Sanders' claim as true.

"In the last 20 years, the FDA has approved only three child cancer drugs. In 20 years. Because the burdens are so great," Cruz said.

"The reason there's only been three is the number of kids getting cancer is small, and it's been difficult to attract companies to develop drugs for the small number of kids needing them," said Dr. Otis Brawley, chief medical officer for the American Cancer Society. "It's very difficult to make a profit."

Only about 15,000 children develop cancer a year, Brawely said, and 60% do "really well" on currently available therapies. They represent less than 1% of all cancers, meaning there's fewer patients to study as drug makers work on new treatments.

So while it's true there have been few drugs approved for childhood cancers, it's false to blame that all on the burden of government.

According to data from the National Health Interview Survey, 28.4 million Americans were uninsured in 2016.

Kaiser Family Foundation reported that of those still uninsured at the end of 2015, 46% said they did not get coverage because it was too expensive.

We rate Sanders' claim that 28 million Americans do not have health insurance as true.

Sanders went on to say that "one out of five Americans can't afford the prescription drugs their doctors prescribe."

That number is a little high. According to the 2013 National Health Interview Survey, almost 8% of adults did not take their medications as the doctor prescribed in order to save money.

Researchers from Washington State University found similar results. Just under 8% of Americans aged 26 to 64 were unable to afford their prescriptions in 2014, according to the study published in the American Journal of Public Health in 2016. And overall, by 2015, 5.2% of Americans did not fill a prescription because they could not afford it.

We rate Sanders' claim that 20% of Americans can't afford their prescription drugs as false.

Cruz said there has been an increase in part-time employees due to employers who don't want to provide Obamacare.

Answering a question from a business owner, Cruz referred to employees affected by the health care rules as "29ers" and "49ers."

"29ers are the millions of people across this country that have been forced into part-time work that used to have full-time employment and are now working 29 hours a week because Obamacare kicks in at 30 hours a week. And a lot of them are people -- they're single moms, teenagers, immigrants and they're people who are struggling."

"And 49ers, there are millions of small businesses in the exact situation you're in. A couple months ago, I was in West Texas, was visiting a dairy farmer, driving around the dairy farm. But the farmer brought up, he said, 'You know how many employees I have?' I said I don't know. He said, 'I've got 49.' He said, 'You know why I have 49?' And I said yes, I do. 'Cause Obamacare kicks in at 50. And he said, 'I could hire 20 or 30 more employees right now, but Obamacare would bankrupt my business.' "

Cruz was referencing the Affordable Care Act provision that requires employers with at least 50 full-time employees to offer health benefits.

Only 2% of employers said they changed or planned to change some employees from full-time to part-time and remove their eligibility for health benefits, according to the 2016 Kaiser Family Foundation/HRET Employer Health Benefits Survey.

Meanwhile, 7% of employers changed or planned to change some of their employees from part-time to full-time so that they would be eligible or health benefits, according to the same survey.

Others (4%) reduced the number of full-time employees they intended to hire and 2% increased the waiting period before new employees were eligible for benefits. But 12% extended health benefits eligibility to workers who weren't eligible before.

Researchers also analyzed the Current Population Survey from 2005 to 2015 to look at a potential increase in employers seeking out part-time employment in relation to the Affordable Care Act provisions.

"Our analysis of data from the CPS in general revealed no evidence consistent with the thesis that the ACA caused an overall increase in part-time employment in the United States," researchers wrote in the study.

They also did not observe a substantial increase in working between 25 and 29 hours or fewer than 25 hours from 2013 to 2015. If it were indeed true that there has been an increase in part-time employees, it would be reflected in a "kink" just below the 30-hour threshold, the study said.

We rate the claim as false.

Cruz cited the rising cost of insurance premiums and deductibles as one of the many reasons Obamacare does not work. But the figures he used to back up his claim aren't exactly relevant when it comes to the health reform law.

"The average American family, your premiums have gone up $5,462. At the same time, the average deductible has gone up $5,000. For families that are struggling, you're getting less coverage. You're paying more for it and your deductibles are higher," said Cruz.

The average annual premium for a family with employer-sponsored coverage rose $5,462 increase between 2008 and 2016, according to the 2016 Kaiser Family Foundation/HRET Employer Health Benefits study.

Families with employer-sponsored coverage did see their deductibles rise, but not by $5,000. The average family deductible in the most common type of insurance plan rose by $800 between 2008 and 2016.

Yet these figures refer to the roughly 150 million people who are insured through their employer, not through Obamacare.

The growth of premium increases in employer plans has actually slowed after Obamacare was enacted in 2010, however part of that is due to the economic downturn.

When it comes to Obamacare, premiums have increased for families, but not nearly that much. In 2014, a family of four paid an average of $789 a month for the benchmark silver plan, according to the Health and Human Services Department. By 2017, that figure went up to $1,090. Annually, the increase was $3,612, not $5,462, as Cruz said.

Also, many families don't actually pay that much. Many lower- and moderate-income Americans receive subsidies that reduce their premiums. That family of four would only pay $405 a month, on average, if they qualified for a subsidy.

The Obama administration expected 11.4 million people to be enrolled in Obamacare in 2017.

Since Cruz was refering to employer-sponsored coverage, not Obamacare, we rate this claim as false.

The section on premiums has been updated to include annual premium change.