NYT: Unlike Russian Wars, US Wars ‘Promote Freedom and Democracy’

Trump evokes America’s sins not to challenge them, but to apologize for those of the Russian president and, preemptively, his own. But to insist that the United States is, in fact, on a higher moral plane than Russia serves to legitimize our government’s crimes. 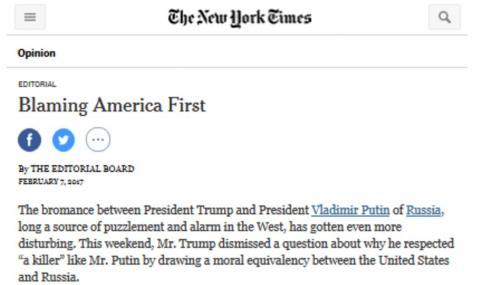 The New York Times, in its recent rebuff of comments President Donald Trump made about Russia, seems not to have evolved its understanding of US geopolitics past an 8th grade level. Trump had been asked by Fox News’ Bill O’Reilly (2/5/17) why he wouldn’t condemn Vladimir Putin, whom O’Reilly called a “killer.”
“You got a lot of killers,” Trump told O’Reilly. “What, you think our country’s so innocent?”
Naturally, this prompted a torrent of pearl-clutching from liberal patriots aghast that the president could equate the moral worth of the United States with that of the dastardly Russians. Most prominent among these was the New York Times, whose editorial board published a flag-waving scolding called “Blaming America First” (2/7/17):

Asserting the moral and political superiority of the United States over Russia has not traditionally been a difficult maneuver for American presidents. But rather than endorsing American exceptionalism, Mr. Trump seemed to appreciate Mr. Putin’s brutality—which includes bombing civilians in Syria and, his accusers allege, responsibility for a trail of dead political opponents and journalists at home—and suggested America acts the same way.

Oh my, the horror.
A rough look at the actions in question since Putin has been in office reveals this outrage to be, at best, misplaced. One tally by Airwars, a Western nonprofit, puts the total number of Syrian civilians killed by Russia since it entered the war in September 2015 at just over 4,000, or 0.8–0.4 percent of the 500,000 to 1 million civilians who died due to George W. Bush’s unilateral invasion of Iraq in 2003. Add to this the thousands of other civilians killed in other theaters of the “War on Terror” under the Bush and Obama administrations, including Afghanistan, Libya and Syria itself, and the idea of pointing to respect for civilian lives as something that elevates the United States above Russia seems a little absurd.
But the addition of stifling dissent and allegedly killing journalists takes Russia over the line into Bad Guy territory, the Times suggests—ignoring the US’s own harsh punishment for whistleblowers, infiltration of dissident groups and bombing of foreign journalists. Not to mention the US’s sprawling, unprecedented incarceration system, or its unmatched institutional racism–all human right abuses leveled at home.
The Times goes on to insist that “no American president has done what Mr. Putin has done,” including “invading Ukraine” and “interfering in the American election.” Of course, American presidents have invaded other countries and intervened in other elections, but for reasons unclear, the Times suggests that those two cases are the ones that indicate the US’s moral superiority over Russia.
The New York Times briefly mentions the Iraq War and torture, but whistles past these episodes by insisting they were “terrible mistakes.” The Times seems to be under the impression that Russia kills innocents for laughs, while the United States does so only with the best of intentions:

At least in recent decades, American presidents who took military action have been driven by the desire to promote freedom and democracy, sometimes with extraordinary results, as when Germany and Japan evolved after World War II from vanquished enemies into trusted, prosperous allies.

That US invasions “have been driven by the desire to promote freedom and democracy” is not argued, let alone proved; it’s presented as an article of faith. As the Times’ “recent decades” go back to World War II, the United States presumably killed an estimated 3.8 million in Vietnam “to promote freedom and democracy”—despite President Dwight Eisenhower admitting that given the chance, 80 percent of the Vietnamese people would have voted for Ho Chi Minh, the leader whose government the US opposed. Implicitly, the US’s use of covert terror to try to overthrow the elected government of Nicaragua, and US military support for death squad regimes elsewhere in Central America, were likewise motivated by a longing for freedom and democracy.
As FAIR (9/30/16) has noted, the most important function of major editorial boards is to be gatekeepers of national security orthodoxy. And there is no more axiomatic orthodoxy than American exceptionalism. One can handwring over “mistakes,” even occasionally do harsh reporting on American war crimes—so long as one arrives back at the position of American moral superiority. “Yes, America has made mistakes,” the good liberal insists, “but at least we don’t do this other bad thing that is, unaccountably, uniquely disqualifying.”
Clearly, Trump’s motives in questioning American innocence were anything but liberal or noble. He was evoking America’s own sins not to challenge them, but to apologize for those of the Russian president and, preemptively, his own. But the outrage over Trump’s comments from pundits and editorial boards did not seek to spotlight his cynicism and its dark implications, but rather to insist that the United States is, in fact, on a higher moral plane than Russia. This is a childish assertion that serves to flatter the ego of American readers while legitimizing their government’s crimes.
Adam Johnson is a contributing analyst for FAIR.org. You can find him on Twitter at @AdamJohnsonNYC.
You can send a message to the New York Times at letters@nytimes.com (Twitter:@NYTimes). Please remember that respectful communication is the most effective.
Subscribe to Portside