The Great American "Welcoming" Break-Out: What’s Not to Like?

Why we should not forget the role our endless wars over the last sixteen years have played in creating the refugee crisis we now so earnestly decry. 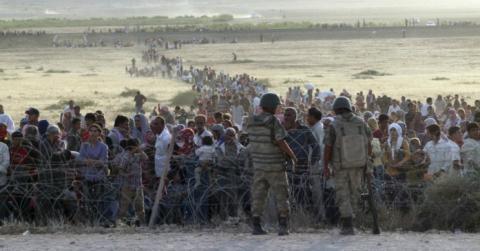 My hometown of Worcester, Massachusetts is dealing with the sanctuary city issue. Officially, Worcester is not a sanctuary city but its Mayor, Joe Petty, has declared that it will not cooperate with federal law enforcement efforts to identify undocumented residents. One disgruntled city counselor, aching for a fight, is demanding that the city either formalize the Mayor’s position or get in step with federal practice; other council members, some openly supportive of the Mayor, seem content to leave the matter as is.

A February 1 rally at city hall turned out one of the largest public demonstrations I’ve seen here in twenty-five years. Despite the 6:00 pm darkness, 20 degree temperature, and falling wet snow, a thousand-plus people voiced their support for the mayor, loudly and stridently announcing that Worcester welcomes immigrants, refugees, and Muslims—Worcester is a “Welcoming City” shouted speaker after speaker.

Placards reading "Welcome Immigrants"; "We are all Immigrants"; "No Hate, No Fear, Everyone is Welcome Here"; and "Who would Jesus Deport" speckled City Hall Plaza. Many of the signs had American flag images or phrases associating Worcester with the best of America’s tradition of being a "welcoming" nation.

I went to the rally generally supportive of the Mayor trying to do the right thing, and in solidarity with my immigrant friends. My mood began souring when the first speaker invoked Worcester’s revolutionary legacy as the site of a first-reading of the Declaration of Independence. Wait a minute, I wondered, what’s that connection? Before I sorted through the issues of conquest and the genocide of indigenous people underway in the 18th century, that he seemed to have glossed over, he confected something about the first Thanksgiving that seemed (at my distance from the podium) to imply that it’s a holiday celebrating a great American tradition: welcoming immigrants.

"Most gratingly, the good-democrats, as cast in the performance as refugee-friendly humanitarians, are often the very politicians who marched lockstep with their party’s neoliberal regime-change policies that tossed millions of people into the streams of global migration. Can we really not see through their theatrics?"

As it progressed, much else in the rally was discordant with my sense of history, politics and political culture. There were numerous invocations of Christian religion—as in "welcoming" is the Christian way-to-be—with no recognition of the thirteenth-century Crusades against Islam as a legacy in the politics of the present. One speaker feared the besmirching of Worcester’s reputation as a City on the Hill were it not to welcome all who come. Another, channeling the old IWW slogan that an-injury-to-one-is-an- injury-to- all, declared that “A Ban on One Religion is a Ban on All Religions.” Hmm, I thought, banning all religions—how about that?

With the weekly city council meeting set to begin at 7:00, the assembly pressed into the building to pack the hallways in support of the Mayor who would uphold Worcester’s reputation as a city that welcomes everyone. My sense of their being something off-key about the event was additionally confirmed when a trumpet player standing high on the stone abutment to the City Hall entrance began playing the Star Spangled Banner—and then repeated it as the crowd moved slowly into the building. Standing now with toes and fingers that felt like icicles, I commented to the man next to me that I usually did not stand for the national anthem—with no sign from him that he got the sarcasm.

Something off-key, but what was it? It wasn’t until thawing-out that I remembered Yen Le Espiritu’s 2014 book Body Counts: The Vietnam War and Militarized Refugees in which she calls-out the narcissism threading ways that Americans remember their wars. Using the war in Vietnam as a case study, she reassessed the "refugee" narrative of migrants’ resettlement in the United States. Viewing them as refugees, she argues, extends into the present the mythology that the ten-year U.S. military presence in Vietnam was a response to the fledgling nation’s request of assistance in repelling the foreign aggression of communism. In that narrative, the evacuation of Saigon in 1975 was a noble "rescue" mission by Americans to "save" helpless South Vietnamese from the communists. Framed that way, she says, the story of Vietnamese Americans is really code for the heroic altruism of Americans—a story-line she rejects.

Body Counts provides a template to help interpret events like that in Worcester that are being staged throughout the country. We are cast in these demonstrations as the principle actors, the welcoming good-people, hierarchically positioned as the providers and protectors for refugeed-subordinates subject to our discretionary goodwill. The script elides our previous role as participants—and it is a democracy in which we participate, a fact the same narrative proclaims—in the foreign and military policies that created the refugees in the first place. Most gratingly, the good-democrats, as cast in the performance as refugee-friendly humanitarians, are often the very politicians who marched lockstep with their party’s neoliberal regime-change policies that tossed millions of people into the streams of global migration. Can we really not see through their theatrics?

And ala the Vietnam case, the present story-line makes no distinction between the migrants displaced by the U.S. invasion, and the local mercenaries who served the occupation forces as flunky translators and informants. When the helicopters lifted off for the last time from Saigon in 1975, they carried mostly the comprador South Vietnamese who had sold themselves to the Americans—a fact obscured in the popular 2015 film Last Days in Vietnam. Now, we see the crocodile tears of liberal democrats attacking the anti-immigrant, anti-refugee character of the Trump administration as it, sniff, sniff, abandons the Iraqis and Afghanis who were bribed, err, promised eventual passage to the U.S. in return for their services.

The "militarized refugees" in Espiritu’s title refers to their use as props in pro-war propaganda, which is to say that even mere immigrants imaged as refugees help demonize the parties said to be responsible for their displacement making them  targets of additional U.S. military strikes—a course leading to more refugees, of course. More perniciously, the sympathy for refugees that often translates into a righteous anger for their mistreatment that gets redirected from the Euro-American centers of power—which are, after all, viewed as refugee-rescuers in Espiritu’s decoding of the refugee narrative—to the post-colonial settings where it can only  inflame the conflicts.

The instinct to welcome immigrants and refugees is a good one but the welcomings now underway across the land fit perfectly into the pattern of easily-exploited humanism described by Espiritu. The anti-war movement needs to approach the immigration issue more politically with a tactical approach designed to enhance its capacity to end U.S. wars of expansion and occupation that generate refugees—how does that rethinking begin?

Jerry Lembcke is Associate Professor of Sociology at College of Holy Cross in Worcester, MA. He is the author of The Spitting Image: Myth, Memory, and the Legacy of Vietnam,  CNN's Tailwind Tale: Inside Vietnam's Last Great Myth and more recently Hanoi Jane: War, Sex, and Fantasies of Betrayal. He can be reached at jlembcke@holycross.edu.