Struggle for Peace Links to All Movements

Anti-war, immigrant rights and communities of color, environmental rights, LGBTQ and women's rights -- all and more are linked to real justice and peace. 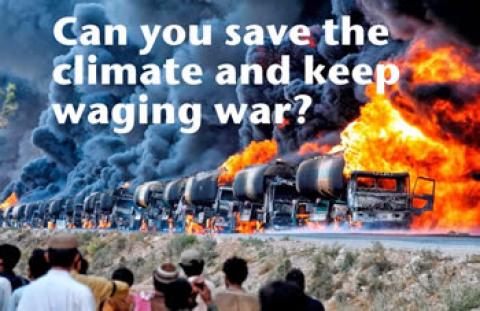 Will you stand for peace?
A petition to the organizers of the April 29 People's Climate March

Your website at PeoplesClimate.org proposes a march on Washington on April 29, 2017, to "unite all our movements" for "communities," "climate," "safety," "health," "the rights of people of color, workers, indigenous people, immigrants, women, LGBTQIA, young people," and a much longer list . . . but not peace.

We wish to make you aware that approximately half of federal discretionary spending is going into wars and war preparation, and that this institution constitutes our single biggest destroyer of the environment.

Will you please add "peace" to the list of things you are marching for?

If you will, it will become a list of things that WE are marching for, as we will join you.

CLICK HERE TO ADD YOUR NAME TO THE ABOVE PETITION BEFORE WE DELIVER IT.

Click here for two dozen pictures mapping war and militarism and the struggle for peace overlaid on a global image of nations. These are drawn from — and you can create your own with — an online tool for mapping militarism published by World Beyond War at bit.ly/mappingmilitarism. This tool has just been updated with new data. On many of the maps at that link you can scroll back in time to see changes over recent years.

By laying some important facts about war on the map, we’re able to recognize some ideas that rarely make it into prose. Here are a few examples:

The presentation at http://worldbeyondwar.org/mapwar can also be found as a “prezi” (a variation on what’s more commonly called a powerpoint and used to be called a slide show). You can grab the prezi for your own use at the World Beyond War events resources page.

It's not too early to start planning yours! Ask us for help!

Find events all over the world that you can take part in.