On the Sidelines: DSA’s Abstentionism on Biden vs. Trump

The heroes of this election victory are the thousands of grassroots political activists who busted their butts to defeat Trump by working for Biden, particularly in the key battleground states. Now we need to focus on Georgia and two Senate seats. 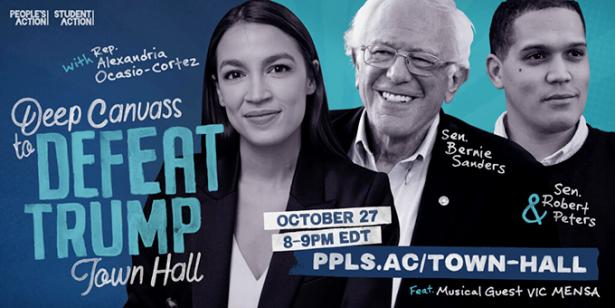 The results are in: Trump was defeated and Joe Biden will be sworn in as the 46th president on January 20, 2021. This victory is the product of a broad, popular united front. Popular, because there was an alliance of cross-class forces that opposed Trump. United, in that these forces agreed on a shared objective – electing Biden and Harris – to remove him from office. In such a broad front, the reasons for uniting to throw out Trump were varied. Many were offended and outraged by his anti-democratic rhetoric and conduct. He repulsed millions with his overt racist, jingoist and sexist behavior, and his cultivation and encouragement of white supremacists.

Activists in the labor movement saw his attacks as weakening our already feeble bargaining power and ability to fight for our members. Regulations protecting everything from air quality and wilderness areas to labor and occupational health standards were gutted.  The left clearly understood that four more years of Trump and his deepening authoritarianism would make it nearly impossible to realize progressive reforms like Medicare for All, a Green New Deal and the much needed labor law reforms proposed in the Protecting the Right to Organize (PRO) Act.

The heroes of this election victory are the thousands of grassroots political activists who busted their butts to defeat Trump by working for Biden, particularly in the key battleground states. Thousands of our comrades in the Democratic Socialists of America (DSA) and other socialists worked side-by-side with leaders and activists in black and brown organizations, women’s organizations, and labor unions like UNITE-HERE and SEIU.  Because of our collective participation in this struggle to elect Biden and Harris we have forged new or deeper ties with organizations and individuals open to discussion and struggle over the way forward in the future Biden administration.

Few, if any, of the comrades we campaigned with had illusions about the reality of who Biden actually is or what he represents. They can recite chapter and verse his personal flaws and long history of complicity with the neo-liberal project. Nevertheless, there was a broad understanding that Trump had to go — and that our efforts would be key to an electoral victory.

But where was DSA — the largest socialist organization in the U.S. — during this Presidential election? While many members individually were leaders in the work to elect Biden — as an organization, we sat on the sidelines. This was the result of a “Bernie or Bust” position requiring DSA to abstain from supporting Biden pushed through by a narrow majority of delegates at DSA’s 2019 convention.

That puts DSA in the embarrassing position of now advancing a program and promoting actions for the first 100 days of the Biden administration, while as an organization it played no formal role in achieving that opportunity. Are we to understand that it would have been an equally useful result to be heading into the first 100 days of a Trump administration? Of course not! As long time trade unionists, we view this refusal to come off the sidelines as analogous to a faction within the union deciding that they don’t like the leaders of a strike or their politics. The faction doesn’t participate in picketing, or the strike kitchen, or the mass demonstrations. Then, these “do nothings” who essentially sat out the strike, come to the union hall insisting on a major role in determining the terms of the strike settlement.

A SOCIALIST’S PLACE IS IN THE STRUGGLE

DSA’s formal abstention from the Biden campaign reflects a larger ideological issue that plagues the organization: a flawed understanding of the “special role of socialists.” The constant refrain from many members is, “We are socialists and we have a special role!” Yes, socialists do have a special role to play in leading popular movements by being the most active and dedicated fighters in the struggle. That dedication and commitment — not pontificating about the problems with the “misleaders/sheepherders” or the neo-liberal from Delaware — is what opens up the opportunity to win the “uninitiated” to our socialist ideas and class analysis.

If this simple concept needs political window dressing from the socialist liturgy, here is a quote from Karl Marx from 1875 in a letter to Wilhelm Bracke: “Every step of real movement is more important than a dozen programmes.”

Bernie Sanders’s entrance onto the national election stage as a Democratic Socialist in the 2016 Democratic primaries was one of the principal causes of DSA’s rapid growth. Instead of choosing a third party route, Sanders wisely jumped into the admittedly murky swamp of Democratic Party politics. And by doing so, his socialist message and working class perspective blossomed and flourished in the mainstream in ways that were hitherto unimaginable.

Again in 2020, Sanders ran as a Democrat in a much more complicated candidate field. Bernie’s campaign forced the other candidates to contend with his programmatic initiatives addressing a rigged economy and our broken democracy. After the Democratic Party consolidated its support behind Biden and Bernie withdrew, he clearly understood what was at stake. Facing “the most dangerous president in US history,” he actively campaigned to get his base to support Biden and Harris.

DSA’s experience in the 2020 election can be a teachable moment. It’s time to acknowledge that “Bernie or Bust” was a major tactical and strategic error. Now, with critical reflection, it can lead to a more mature approach to our electoral politics. That maturation should begin with a disavowal of the position taken by many DSA chapters in local races that they can only support self-proclaimed socialist candidates. This too has again led to the isolation of socialists from the actual struggle over the needs and interests of our class. Many candidates stand with us on the issues. They stand for positions that will benefit the lot of working people and people of color. Their successful election would result in policies benefiting the lives of the working class. Again, this abstention is contradictory to the needs and interests of the people we purport to fight for. It just isolates us from the potential to make gains, win reforms and win respect for our analysis and ideas.

Let’s learn from 2020. Now it’s time to fight for two Senate seats in Georgia to create the most favorable playing field on which to challenge — and push — the neo-liberal President-elect Joe Biden.

Peter Olney is on the Steering Committee of DSA’s Labor Commission and a lifelong union organizer.   In 2020, he volunteered with Seed the Vote (STV) to work on the Biden campaign in Maricopa County Arizona. Rand Wilson, also a lifelong union organizer, has been a member of DSA since 1986. After Sanders declared for the Democratic nomination in 2015, Wilson registered as a Democrat for the first time. He was elected a delegate to the 2016 DNC convention and was a member of the DNC Credentials Committee for the 2020 convention.

[Peter Olney is retired Organizing Director of the ILWU. He has been a labor organizer for 40 years in Massachusetts and California. He has worked for multiple unions before landing at the ILWU in 1997. For three years he was the Associate Director of the Institute for Labor and Employment at the University of California. View all posts by Peter Olney →

Rand Wilson has worked as a union organizer and labor communicator for nearly forty years and is currently an organizer and Chief of Staff for SEIU Local 888 in Boston. Wilson was the founding director of Massachusetts Jobs with Justice. Active in electoral politics, he ran for state auditor in a campaign to win cross-endorsement (or fusion) voting reform and establish a Massachusetts Working Families Party. In 2016 he helped to co-found Labor for Bernie and was elected as a Sanders delegate to the Democratic National Convention. Wilson is board chair for the ICA Group and the Local Enterprise Assistance Fund; and a director of the Center for the Study of Public Policy. He also serves as a trustee for the Somerville Job Creation and Retention Trust. View all posts by Rand Wilson → ]

Both the Stansbury Forum and Organizing Upgrade felt it important to maximize the exposure of this piece and are co-publishing.