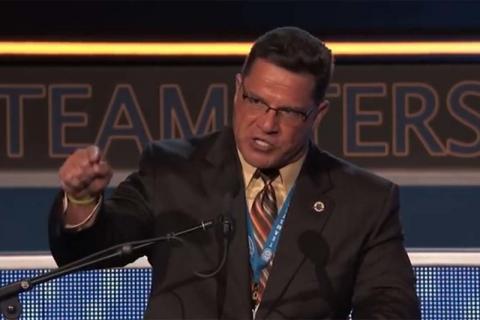 Standing before his fellow Teamsters in June, Travis Bornstein shared the story of his 23-year-old son, an accomplished golfer and bodybuilder who became addicted to prescription pain pills after elbow surgery and eventually succumbed to a heroin overdose in an empty field. For the next two hours at the national meeting in Las Vegas, truckers, dockworkers, and warehousemen told of losing aunts, nephews, and fathers to addiction.

The Chesterbrook-based company, ranked 12th by revenue on the Fortune 500, is holding its annual shareholder meeting in Philadelphia, and the union pension and benefits funds own an undisclosed share. But any shareholder can attend the closed meeting. Representatives said they will question the board and hold an afternoon rally outside.

More than 140 Americans a day fatally overdosed on drugs of all kinds in 2015, with Pennsylvania’s death rate rising 20 percent — twice as fast as the national average. Frustrated over the inability of government and medical institutions to reverse the trend, advocates have been increasingly going after the companies that earn profits from making and distributing pharmaceuticals, particularly opioids.

AmerisourceBergen officials said Wednesday they were unaware of the Teamsters’ plans.  The company is one of three wholesalers that dominate the U.S.  market and distributed more than 475 million doses of prescription opioids in Pennsylvania alone in 2015, according to the U.S. Drug Enforcement Administration. All three have settled past DEA cases alleging that they failed to report questionable orders, although only limited information has been released by the government.

The Teamsters in November demanded that the biggest wholesaler, McKesson Corp., take back millions of dollars in pay from its chief executive, arguing that the company’s value had been damaged by its role in the opioid crisis. Discussions are ongoing, union officials said.

Officials in the department that works on governance issues involving companies in which the Teamsters’ pension and benefit funds have invested more than $100 billion compared the issue to the recent Wells Fargo scandal. In that case, unethical practices by sales representatives eventually forced the board to “claw back” tens of millions of dollars in compensation from  its chief executive.

The Teamsters officials said they would make similar demands at Thursday’s meeting of the AmerisourceBergen board. They also plan to ask the board to investigate company representatives’ sales practices and to appoint an independent committee of the board to handle legal issues involving opioids.

“They need to have control over their supply chain,” said Carin Zelenko, director of the capital strategies department. “We want to show them the rage that people feel in the streets.”

AmerisourceBergen welcomes a "productive dialogue” with all shareholders, Gabe Weissman, vice president for communications, said via email in response to a request for comment.

“The issue of opioid abuse is a complex one that spans the full health-care spectrum, including manufacturers, wholesalers, insurers, prescribers, pharmacists and regulatory and enforcement agencies. All of these entities work together to ensure medicine is available, as appropriate and prescribed, to patients while also limiting and preventing abuse," he said.

“AmerisourceBergen has been and remains committed to the safe and appropriate delivery of controlled substances. We work closely with regulatory agencies, reporting all distribution of controlled opioid medications on a daily basis, and care providers to combat drug diversion while supporting appropriate access to medications.”

Zelenko said that the Teamsters represent workers at AmerisourceBergen locations in Seattle and New York, and that labor issues were not behind the union's challenge. The company employs 18,000 worldwide, including about 1,000 in the Philadelphia region.

CEO Steven Collis made about $10 million in total compensation last year. “His incentive pay is linked entirely to corporate financial performance measures," said Michael Pryce-Jones, an analyst in the union's corporate strategies department. The Teamsters argue that "a compliance and integrity-related metric" should be added, he said, reducing payouts when the company  violates safety and regulatory issues.

State Rep. John Taylor (R., Phila.) said he plans to join the protesters outside the shareholders meeting, which will begin at 1 p.m. at the Sofitel Hotel Philadelphia. Taylor said he heard about it from a union official who attended a recent training session in his district on administering naloxone, the emergency overdose-reversal medication.

Taylor recalled cases in which someone would suddenly "be using hundreds of thousands of more pills" and that "distributors aren't paying attention" to patterns that they should spot and stop. "I agree with the Teamsters, I think people should be accountable and should be vigilant," said Taylor, who represents the city's river wards, where addiction is high.

Opioid deaths are of huge interest to the Teamsters, who live in heavily affected communities, work for companies that are involved with the pharmaceutical supply chain, and do jobs that can cause injuries that are often treated with prescription pain pills, said Pryce-Jones.

He said that when Travis Bornstein got up and spoke to the national meeting in June about his son's overdose death — and member after member followed with their own stories — the issue suddenly moved onto the national organization's radar screen.

Bornstein himself was in shock.  The former dockworker and current president of Teamsters Local 24 in Akron, Ohio, had decided to speak to the gathering to raise awareness about the disease that had taken his son Tyler —a college student on a golf and academic scholarship who was left  by his drug-using buddies to die in an empty field of an overdose of heroin and fentanyl in 2014. He died three months after returning to Ohio from a sober living facility in Florida.

One member after another took the microphone for nearly two hours, pledging $1.4 million to support the nonprofit,  Breaking Barriers — Hope Is Alive, that Bornstein's family had started to expand treatment in Ohio.

"I got a call yesterday," he said in a telephone interview Wednesday, "that we had a Local 24 member driver die of an overdose."