This reconciliation bill is being opposed by every Republican in Congress as well as the drug companies, the insurance companies, the fossil fuel industry and the billionaire class. They want to maintain the status quo in which the rich get richer. 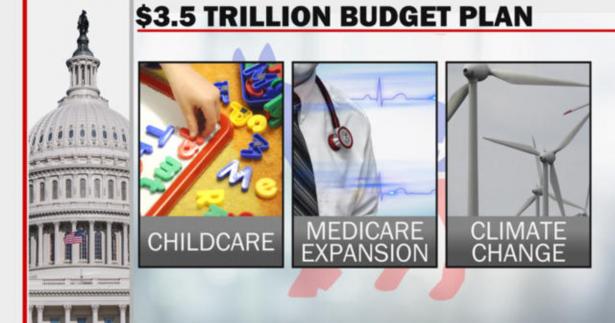 Pres. Biden's $3.5 trillion spending plan is at risk in Congress partly because it strikes people as a lot of money. But - the net cost of the plan, after taking into account offsetting tax increases and spending cuts, is only one-quarter as big.,CBS News

We live in an unprecedented moment as our country faces enormous crises, including COVID-19, climate change, attacks on democracy, income and wealth inequality, and the multidecade decline of the American middle class.

As chairman of the Senate Budget Committee, I proposed a $6 trillion reconciliation bill that would begin to address these long-neglected problems. A strong majority of the Democratic caucus supported that proposal, but not all.

As a result, we made a major compromise to reduce that budget from $6 trillion to $3.5 trillion. This entire package would not add to the deficit and would be paid for by demanding that the wealthiest people in our country and large, profitable corporations start paying their fair share of taxes.

Poll after poll, especially among working-class people, shows overwhelming support for what we are trying to accomplish.

Now, for whatever reason, pundits say we should compromise even more and cut back on addressing the long-neglected problems facing working families as well as climate change. Really? Please tell me where we should cut.

Should we end the $300 direct payments to working-class parents that have cut childhood poverty in our country by nearly half? Should we continue to ignore the dysfunctionality of our child care system that forces millions of working families to spend up to 35% of their limited incomes on child care and keeps more than a million women out of the workforce?

Should we deny low- and moderate-income young people the opportunity to get the higher education and job skills they need by making community colleges tuition free?

Should we continue allowing the pharmaceutical industry to charge us, by far, the highest prices in the world for prescription drugs?

Should we continue a situation where many millions of seniors are unable to afford to go to a dentist to get treatment for their rotting teeth, or buy the hearing aids and eye glasses they need – or should we expand Medicare to cover those basic health care needs?

Should we continue being the only major country on Earth not to guarantee paid family and medical leave?

Should we, as an aging society, force older and disabled Americans into expensive nursing home care, or should we expand home health care and allow them the opportunity to stay in their own homes?

Should we have 600,000 homeless Americans, or should we finally begin building the millions of units of low-income and affordable housing that we need?

And then there is the existential threat of climate change.

When the planet becomes warmer and warmer, with unprecedented forest fires, drought, floods, extreme weather disturbances and acidification of the oceans that are causing mass destruction, and when scientists tell us that we only have a few years to avoid irreparable damage to our country and planet, should we really continue to ignore this global crisis?

This reconciliation bill is being opposed by every Republican in Congress as well as the drug companies, the insurance companies, the fossil fuel industry and the billionaire class. They want to maintain the status quo in which the rich get richer while ordinary Americans continue to struggle to make ends meet.

Well, I disagree. Now is the time, finally, for Congress to stand up for working families and have the courage to take on the big money interests and wealthy campaign contributors who have so much power over the economic and political life of our country.

[Bernie Sanders is serving his third term in the U.S. Senate after winning re-election in 2018. His previous 16 years in the House of Representatives make him the longest serving independent member of Congress in American history.]