From Bad to Worse for Puerto Rico

The plan by the oversight board for Puerto Rico will depress the economy further and fuel a debt spiral, in which Puerto Ricans, US taxpayers, and in the long run, even the creditors will lose 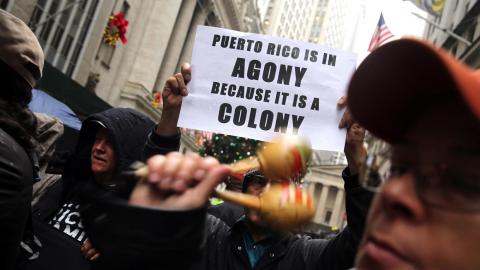 SAN JUAN – Puerto Rico’s deep and prolonged recession has led to a severe debt crisis. And the combination of economic contraction and massive liabilities is having dire consequences for the island.

Everywhere in the United States commonwealth, private-sector jobs are being lost. Total employment in Puerto Rico has fallen from 1.25 million in the last quarter of the 2007 fiscal year workers to less than a million almost a decade later. Without employment, large numbers of Puerto Ricans (who are US citizens) have emigrated. But, despite this flight, the unemployment rate is now 12.4%. Without job prospects, the labor participation rate has plummeted to 40%, two-thirds of the level on the US mainland. About 60% of Puerto Rico’s children live in poverty.

The commonwealth’s debt position is clearly unsustainable, and its economy will be able to recover only if it gets a fresh start. But, unlike US municipalities, Puerto Rico is not protected by the US bankruptcy code. It is well known that decentralized bargaining processes for debt restructuring often lead to disastrous outcomes, with the relief obtained being insufficient to restore debt sustainability.

Aware of this reality, Puerto Rico enacted its own bankruptcy law, but the US Supreme Court struck it down, because the island is de facto an American colony, and the federal bankruptcy code permits only the US Congress to enact bankruptcy legislation over its territory. Eventually, Congress took action and enacted PROMESA, a law ostensibly designed to facilitate debt restructuring and economic recovery. Reflecting the standard colonialist view that a colony cannot be trusted to make independent decisions, a bipartisan Financial Oversight and Management Board was created to make fiscal decisions for Puerto Rico.

But PROMESA is bringing more problems than solutions. Recently, the Board—seemingly lacking both any understanding of basic economics and democratic accountability to provide checks against its incompetence – published its demands for the next fiscal year. The Board actually predicted that its proposals would turn Puerto Rico’s recession into a depression of a magnitude seldom seen anywhere: a 16.2% decline in GNP in the next fiscal year (and a further decline the year after), which is comparable to the experience of countries undergoing civil wars, or that of crisis-ridden Venezuela.

That is because the Board’s plan gives priority to the island’s creditors. It arbitrarily defines a minimum that must be paid to them in the short run, and forces the government to do whatever it takes to reach that goal, even if it means devastating the local economy. Indeed, the plan all but guarantees a social as well as an economic catastrophe, owing to substantial cuts in pensions, education, and health spending.

Remarkably, the Board’s plan is sketchy when it comes to its central obligation: crafting a plan for debt restructuring. This is shortsighted, because depressing the economy further will fuel a debt spiral. US taxpayers will lose, too: they will pay for the costs entailed by higher emigration. In the long run, even the creditors will lose. The proposed course is not only unfair, but also inefficient and ultimately self-defeating.

Those who advocate servicing part of the outstanding debt payments now claim that this would show that Puerto Rico is willing to pay, which in turn would inspire confidence on the part of creditors and investors. But Puerto Rico’s problem is a lack of capacity to pay, not a lack of willingness. The only way the commonwealth can stimulate confidence is by restoring economic growth.

The plan does include sensible calls for improving tax collection and the efficiency of government spending. But, though necessary, such measures will not resolve the crisis.

The Board is confusing efficiency with austerity. And while it would be nice if one could magically bring about productivity increases, the island’s real problems call not so much for supply-side reforms as for increased demand. Puerto Rico is in a demand-constrained regime, demonstrated by the significant subutilization of its factors of production. The Board’s plan markedly exacerbates this problem, without showing any awareness that it is doing so.

In a demand-constrained regime, recent measures to increase labor-market flexibility – and thus facilitate the lowering of wages by employers – will not result in faster growth. On the contrary, lower wages will lead to decreased spending, aggravating the depression, and further increase the likelihood of immigration to the US, where salaries are substantially higher.

A commitment to restoring economic growth should be the center of any restructuring proposal – or of any viable fiscal plan – for Puerto Rico. That commitment must begin with a substantial debt write-off, as well as a short-term moratorium on all debt payments. But this will not be enough: even if Puerto Rico makes no debt payments in the short term, its primary deficit implies that it will still need to take steps that would depress economic activity.

That is why the restructuring plan should include a third element: a clause providing for lending into arrears, which, by making new debt senior to old debt, would enable Puerto Rico to get fresh credit now, when it most needs it. This would create the space the authorities need to implement macroeconomic policies conducive to recovery.

The PROMESA Board was supposed to chart a path to recovery; its plan makes a recovery a virtual impossibility. If the Board’s plan is adopted, Puerto Rico’s people will experience untold suffering. And to what end? The crisis will not be resolved. On the contrary, the debt position will become even more unsustainable.

Joseph E. Stiglitz, recipient of the Nobel Memorial Prize in Economic Sciences in 2001 and the John Bates Clark Medal in 1979, is University Professor at Columbia University, Co-Chair of the High-Level Expert Group on the Measurement of Economic Performance and Social Progress at the OECD, and Chief Economist of the Roosevelt Institute. A former senior vice president and chief economist of the World Bank and chair of the US president’s Council of Economic Advisers under Bill Clinton, in 2000 he founded the Initiative for Policy Dialogue, a think tank on international development based at Columbia University. His most recent book is The Euro: How a Common Currency Threatens the Future of Europe.

Martin Guzman, a research associate at Columbia University Business School and an associate professor at the University of Buenos Aires, is a co-chair of the Columbia Initiative for Policy Dialogue Taskforce on Debt Restructuring and Sovereign Bankruptcy and a senior fellow at the Centre for International Governance Innovation (CIGI).