Americans Must Liberate Themselves From the Oppression of Health Coverage, Say Republicans

Is Paul Ryan's desire to snatch coverage from millions so he can give an enormous tax break to wealthy people utterly monstrous? Absolutely. But if nothing else, Ryan isn't trying to convince us he believes something he doesn't. Strip away the complex politics involved and it becomes evident that Republican proposals are based upon the belief that, as Ayn Rand preached, the government has no obligation to help anyone. 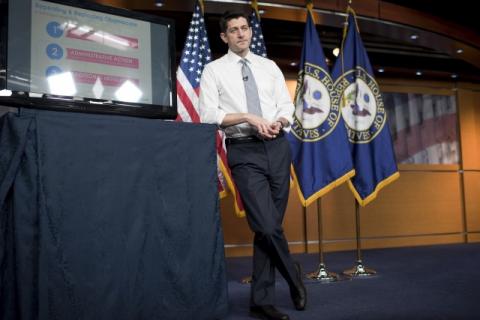 Speaker of the House Paul Ryan conducts a presentation on the American Health Care Act, the GOP's plan to repeal and replace the Affordable Care Act. ,Tom Williams/CQ Roll Call via AP Images

As they try to win Americans over to their plan to repeal the Affordable Care Act, the Republican Party is like a salesman trying to get you to buy one of those hoverboards. You ask, "But don't these burst into flames? That seems like a problem." The salesman waves his hand. "Pshaw," he says. "It's not about who is or isn't on fire. It's about freedom!"

Keep that idea in mind while we proceed. Early this week the Congressional Budget Office (CBO) will release its assessment of the bill currently moving through the House, and the CBO's "score" will almost certainly say that the bill will cause millions (if not tens of millions) to lose their health coverage, in perhaps the most catastrophic event to hit the American health-care system in modern times. It may also predict that premiums will rise, out-of-pocket costs will rise, and the individual health-care market will destabilize, perhaps even tumbling into a "death spiral" once healthy people start foregoing coverage while sicker people stay in the risk pool, costing insurers more money and leading them to either raise premiums drastically or pull out of the market entirely.

"We're going to have insurance for everybody." That's what President Trump told The Washington Post in January: "'We're going to have insurance for everybody,' Trump said. 'There was a philosophy in some circles that if you can't pay for it, you don't get it. That's not going to happen with us.' People covered under the law 'can expect to have great health care. It will be in a much simplified form. Much less expensive and much better.'"

"Nobody will be worse off financially." That's what Secretary of Health and Human Services Tom Price told Chuck Todd on Meet the Press on Sunday, adding that more people would be insured under the Republican plan: "I firmly believe that nobody will be worse off financially in the process that we're going through, understanding that they'll have choices that they can select the kinda coverage that they want for themselves and for their family, not the government forces them to buy. So there's cost that needs to come down, and we believe we're going to be able to do that through this system. There's coverage that's going to go up."

Premiums will come down. "Under the plan that we're talking about now," said budget director Mick Mulvaney, "the competition that Republicans so often want in so many parts of our economy—that competition will tend to drive down premiums."

You will perhaps not be surprised to hear that none of these claims is actually true. The Republican plan is not going to bring down premiums, lots of people could lose their Medicaid coverage, many people are going to be worse off financially, and they sure as hell aren't going to provide coverage for everybody. We don't know exactly how many people are going to lose their coverage, but it could be as many as 20 million.

Which is where Paul Ryan comes back into the picture. He's not promising insurance coverage for everyone, like Trump did, or that more people will have coverage, like Price did. In fact, he has a comeback ready for any time someone confronts him with the prospect of millions of Americans losing their coverage. It's the equivalent of that hoverboard salesman saying, "How do you know people don't want to be on fire?"

On Face the Nation, John Dickerson asked Ryan how many people will lose coverage under his plan, and here's how Ryan responded:

I can't answer that question. It's up to people. Here—here's the premise of your question. Are you going to stop mandating people buy health insurance? People are going to do what they want to do with their lives because we believe in individual freedom in this country. So the question is, are we providing a system where people have access to health insurance if they choose to do so? And the answer is yes. But are we going to have some nice looking spreadsheet that says we, the government of the American—of the United States are going to make people buy something and, therefore, they're all going to buy it? No. That's the fatal conceit of Obamacare in the first place.

The clever thing about this piece of spin is that unlike Trump, Price, and the others, Ryan won't be accused of having broken his promise, no matter what happens, because he's promising nothing apart from meaningless notions like "access" and "choice." If his bill passes and 20 million people lose their coverage, Ryan will say, "That's good news. All those people are now breathing the sweet air of liberty. They didn't lose their health coverage, they gained their freedom."

Is Ryan's desire to snatch coverage from so many millions so he can give an enormous tax break to wealthy people utterly monstrous? Absolutely. But if nothing else, Ryan isn't trying to convince us he believes something he doesn't. He's still the same guy who said in 2005, "I grew up reading Ayn Rand and it taught me quite a bit about who I am and what my value systems are, and what my beliefs are. It's inspired me so much that it's required reading in my office for all my interns and my staff."

Strip away the complex politics involved, and that's what's driving Republicans right now, even if some are less willing than Ryan to admit it. It's the belief that, as Ayn Rand preached, the government has no obligation to help anyone. If you find yourself in need of that help, what you really require is a good talking-to and a healthy yank on your bootstraps. Then you'll truly appreciate how free you've become.

Paul Waldman is a weekly columnist and senior writer for The American Prospect. He also writes for the Plum Line blog at The Washington Post and The Week and is the author of Being Right is Not Enough: What Progressives Must Learn From Conservative Success.