One consequence of the rough times unions are facing today is a loss of institutional memory and history. This new book seeks to preserve that memory, and the how-to-be-a-militant-union knowledge that goes with it, by focusing on how one United Electrical Workers local union was built, and how it fared during the McCarthy years and afterwards. 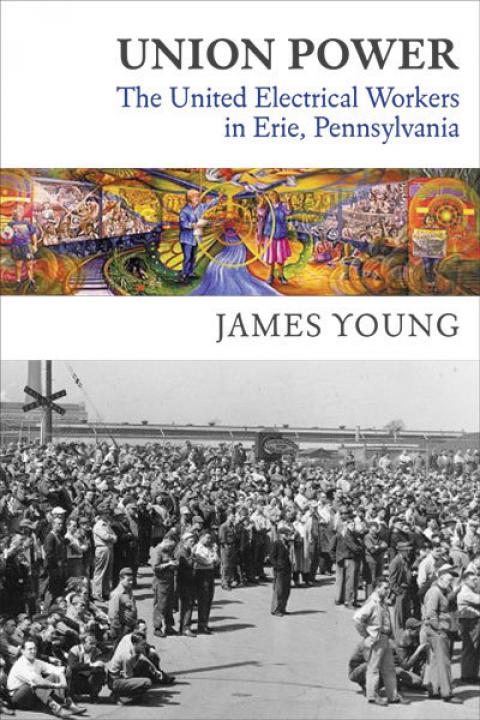 So much of a sense of union history is in danger of disappearance with the downward slide of organized labor, we need a refresher--not just a big sweep but the saga in a microcosm. Union Power supplies a lucid case study in the key developments from the 1930s breakthrough of industrial unionism through the grim counterattack by capitalism to the struggle for survival. Whoever is old enough to remember the many campus peace events of the later 1960s with only one speaker from organized labor on hand-that is, from the United Electrical Workers-will have an insight already.

Author James Young, longtime activist, academic historian and now retiree still on the (radical) job, is well suited for the task, and so is the location, Erie, PA. Young recalls that, long ago, he began collecting stories of union oldtimers, the kinds of stories that rarely find their way into history books but constitute the kind of evidence Studs Terkel and others brought to bear against the once-standard treatments of "great leaders" who built unions and wisely made peace with the employers.

The story could go back to the failed struggles to organize electrical workers before the later 1930s, but here we begin with the CIO drive and the assorted union enthusiasts who included middle aged Socialist Party members among mostly younger-generation Communists and others. The industry was heavily gendered, with women naturally becoming key to unionization. As these pioneers struggled to create union enthusiasm (with a hand-cranked, mimeographed newsletter, The Spark, to assist), the mega-giant employer, General Electric, offered up a company union-and failed.

What kind of city was Erie, where unionism could move dramatically forward? Young gives us a vivid view of this community of sixty-some thousand, full of Eastern and Southern European immigrants. They had voted for socialist or labor-oriented candidates intermittently, and rallied to the unemployed movements of the early Depression, but the political Right was also strong, with its own fresh energies mobilized by radio-priest, anti-Semite Father Coughlin, broadcasting hate messages from Royal Oak, Michigan, outside Detroit. As the union organizing drive ramped up, the House Committee on Un-American Activities lay in wait.

Wartime made unionism legitimate, from the Roosevelt White House itself. Election victory followed election victory for the UE locals, unions joined with corporate leaders to promote productivity, women gained equal pay with men for many jobs (something almost unique to the UE, and a tremendous gain for the time), and the future for labor looked bright. That is, until the war ended, and workers, frustrated at their wages held back while profits flowed in, struck militantly during 1945-46.

Now the story gets grim, because the Right knew what to do to strike back. The new Truman administration insisted, with employers, that higher wages demanded higher prices to the consumer-undercutting the social policies of progressive unionism, thus rendered into consumerism. The election victories of Republicans in 1946 prompted the Red Scare that employers and political conservatives had been holding in reserve for years. Young captures very effectively the role of the Church and the local press in Erie, driving home a campaign to isolate and ruin unionists associated with the Communist Party. That is to say: any unionists who were not avowedly anticommunist.

The "red-baiting industry," as Young properly calls the operation, seized upon the Irish leadership of the US Catholicism, determined to mobilize the membership at large. It is difficult, today, to grasp the power that the Church during the 1930s-40s within the ethnic communities, even where organized groups of free thinkers, often sympathizers to radical causes, held their ground. At the Erie Works, Catholics counted up eighty percent of the workforce, including most of the women workers. All three locally-based international officers of the union themselves came from Catholic backgrounds. Young effectively explores Church positions and teachings, expressed especially in the pulpits and in Church newspapers. The Church had been suspicious of union organizing from the outset, and then enraged at "red" unions such as the UE. Union meetings, held on Sunday mornings, also forced many members to choose, with family pressures to choose the Church.

Church hostility and newspaper attacks were not enough, especially at first, to turn workers away (or intimidate them) from the UE. During the War, when union membership flourished, and the UE won equal pay for women, they could celebrate locally a virtually unprecedented victory of this kind, given the scale of the workforce.  Within a few years, however, Taft-Hartley legislation, effectively outlawing any Communist leadership, became crucial, following steady attacks by the Church and local politicians. The orchestrated split in the labor movement, in this case the creation of the International Union of Electrical Workers (IUE), offered the Right the opportunity long desired. The Association of Christian Trade Unionists (ACTU), led by a Monsigneur Rice--who, in later decades, apologized profusely for his role-was crucial in isolating the Left. So was the emerging IUE leader, loyal to their cause: James Carey. An egotistic and erratic figure, both seemingly militant and politically hawkish, Carey simultaneously swore loyalty to America in the Cold War and swore also to defend wage gains for those who would quit the presumed red union.

The fight was protracted, across many fronts, waged intensively as any within labor since the days of the romantic IWW versus the craft-exclusionary AFL. (Indeed, the AFL of the 1940s spent more money fighting reds than on the much-lauded "Operation Dixie," to organize the South and transfer American politics.) In 1949, the CIO formally expelled eleven unions deemed communist-dominated. The Left unions, supporting Henry Wallace for president in 1948, defied the rightward direction of the labor movement replacing militancy with loyalty to the Democratic Party and trusting in patronage to solve labor's problems. In return, Democrats took labor's support for granted

A review cannot do justice to the detailed examination of this struggle but we can say that James Young writes at his best, going almost from month to month and week to week from 1947 to 1952. We may regret that so many of the rank and file Left were gone before he could complete his work, to give their own, more personal versions of the stories on the shop floor during the halcyon days

In the end, the conservatives won, but they could not destroy the UE outright, as they did with any number of smaller, left-oriented unions created in the 1930s-40s. By 1954, the UE had survived the worst of the attacks, and now remained but without some of the great leaders of past years, leaders who had bowed out or been overwhelmed by the stresses of repression.

Toward the end of the book, we see UE joining the struggles for civil rights and against war, long before most of the rest of the labor movement. At times and places, they were able to join hands with IUE locals toward common purposes. We also see the reduction in the workforce, due in part to outsourcing, in part to automation, that undercut progressive and unprogressive unionism alike. UE could uphold, among other gains, the victories for women in labor. In the end, GE did not need Erie much any more. But the memories were real and they remain. We can all benefit from them.

Frank Emspak, now a retiring director of WIN, Workers Independent News radio, was a labor educator and a shop steward at Lynn in earlier decades.
Paul Buhle is a labor and oral historian.