"[The Democrats] need a counter-offer, one that's more compelling than the creaky status quo. They need a single-payer, Medicare-for-All plan." 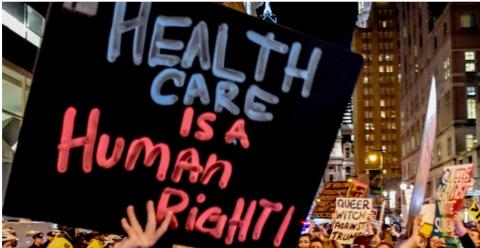 Physicians for National Health Program president Dr. Carol Paris said Friday's failure by the GOP to pass their "slash and burn" healthcare bill "presents a unique opportunity to move beyond" a profit-based system.,

With the Republican attempt to replace the Affordable Care Act (ACA) going down in flames Friday as Americans rallied to defend their right to healthcare, Democrats are being urged, both by experts and constituents, to seize on the moment and counter with a plan that will truly provide coverage for all.

Uproar over the GOP's American Health Care Act (AHCA), which was estimated to strip 24 million people of their healthcare by 2026, prompted a political firestorm as it drove voters across the nation to town halls and local legislative offices to demand that House Republicans vote against the bill.

After the White House called on House Speaker Paul Ryan (Wis.) to withdraw Friday's scheduled vote (after an aggressive lobby effort on the part of both President Donald Trump and Ryan), many are looking to what happens next.

Though the Republican narrative that Obamacare is "imploding" has been proven to be an unfounded talking point, The Week's Ryan Cooper argued Friday that Democrats "shouldn't sit idly by and wait for Republicans to slowly bleed Obamacare to death by other means."

"They need a counter-offer," Cooper writes, "one that's more compelling than the creaky status quo. They need a single-payer, Medicare-for-All plan."

In a press statement she expanded on this idea:

Many of the criticisms of the ACA are, in fact valid. For all the improvements under the ACA, primarily the expansion of Medicaid and crackdown on some insurance abuses, the ACA still left 28 million without health coverage, and millions more struggling with un-payable medical bills and escalating out of pocket costs.

Where the Democrats too fell short was their failure in drafting the ACA to refute the underlying source of the health care crisis in the first place, the contradiction between a health care system that should be based on patient need and the public health and well being, and the insatiable demand of health care corporations for profits first.

Dr. Carol Paris, president of Physicians for National Health Program (PNHP), which has long-advocated for single-payer system, said Friday's failure by the Republican Party to pass their "slash and burn" healthcare bill "presents a unique opportunity to move beyond" a profit-based system.

Though Paris acknowledged the GOP plan would have "pushed millions more Americans off their health insurance, sending the rates of medical bankruptcy and preventable deaths skyrocketing," she said the shortcomings of the ACA should not be ignored.

"The ACA left 29 million Americans uninsured and channeled billions of taxpayer dollars to a patchwork of wasteful private insurers, each one skimming off its own share of administrative costs and profit that should have been spent on patient care," Dr. Paris noted. "Let's clear the drawing board—it's time to adopt a simple, commonsense approach to national health care."

Pointing to the collapse of the GOP's attempt at reform, DeMoro says it's clear their party has no viable pathway towards a solution. "The Republicans are ideologically split it appears," she said. "Trump is trying to maintain that everyone should have healthcare and the cost should go down—that solution, and the only possible solution is Medicare-for-All."

In a Friday press statement, Rep. Luis  Gutiérrez (D-IL) echoed this call. "We have known for years that the only true healthcare reform that will work is a single-payer system where we take national responsibility for the health of our nation," he said. "Now that this vote is over, I hope we can return to a serious and sensible discussion of strengthening our healthcare system and the improving the health of all Americans."

In addition to Medicare-for-All being "quite clearly the best universal health-care policy option for the United States," The Week's Cooper also observed that "Obamacare did not finish the job of achieving universal health care, and this is a good chance to move the ball forward."

The AHCA, Cooper continues, "is extraordinarily unpopular because it takes coverage and subsidies away from people, and a majority believe that it should be the government's responsibility to make sure everyone is covered. Fundamentally, Medicare is very popular, a fact only partially covered up by generations of red-baiting and duplicitous austerian propaganda."

Further, he notes that "it also makes an excellent organizing signpost. Medicare-for-All is simple, easy to understand, and hard to argue against or distort."

The math works out too. Dr. David Himmelstein and Dr. Steffie Woolhandler, both of whom are closely associated with PNHP, published an analysis this week which found that replacing the ACA "with a universal, single-payer health system, along the lines of the Expanded and Improved Medicare for All Act, H.R. 676, would provide immediate coverage to the 26 million Americans who are currently uninsured, saving at least 20,984 lives in year one."

This is in contrast to the Congressional Budget Office estimate that as many as 24 million people would lose health coverage by 2026 under the AHCA.

Responding to Friday's developments, Sen. Bernie Sanders (I-Vt.) called the failure of the AHCA a "great victory," but said that lawmakers' work would not be complete until healthcare was guaranteed "to all people as a right": 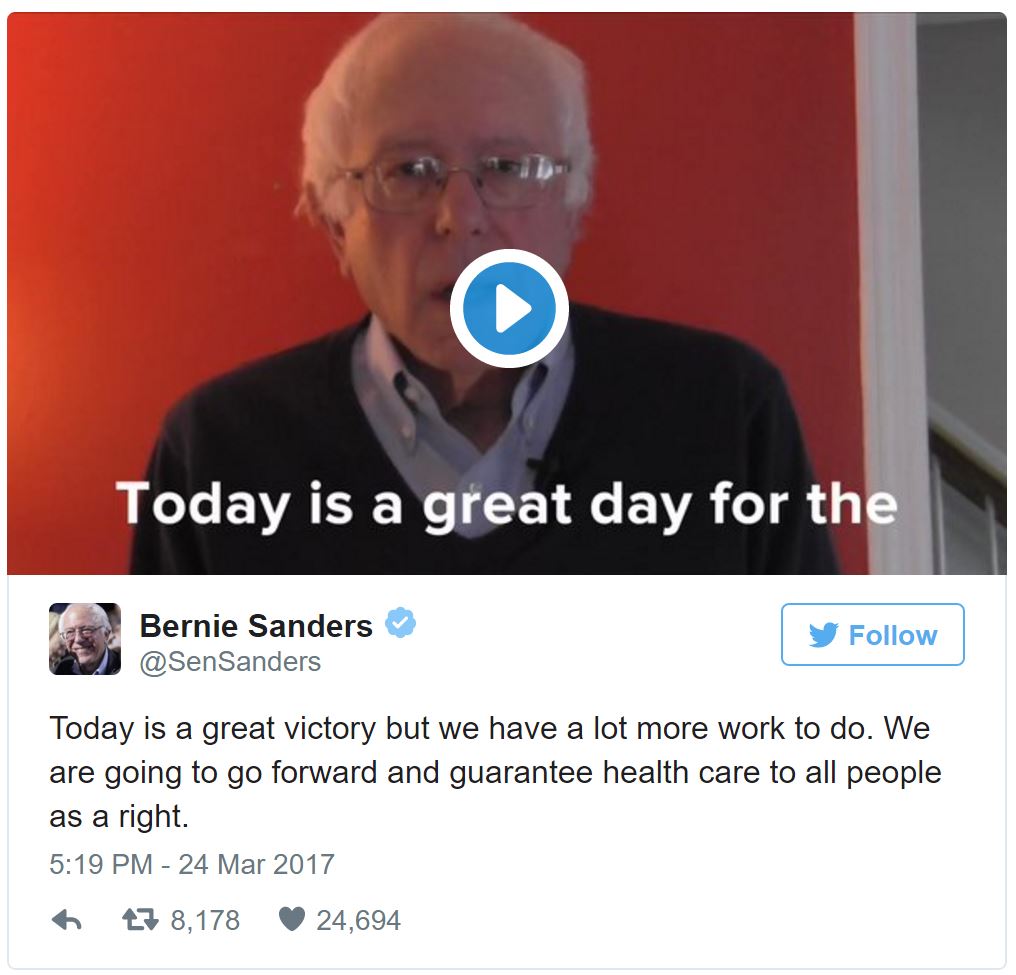 Contrary to Republican orthodoxy, many of Trump's blue collar supporters voted for him specifically because he promised to "take care of everybody." Speaking with some of those voters in West Virginia recently, Sandersfound that many do believe that healthcare should be guaranteed as a human right.

Sanders, who made Medicare-for-All a key plank of his 2016 presidential campaign, said recently that the president's supporters "are catching on that Trump lied."

Robert Frank, an economics professor at the Johnson Graduate School of Management at Cornell University, argued in a New York Times op-ed Friday that the president could preserve the floundering effort to replace Obamacare while making good on his campaign promises by getting behind a Medicare-for-All, or single payer, healthcare plan.

Trump should use his "political leverage...to jettison the traditional Republican approach in favor of a form of the single-payer health care that most other countries use."

Taking to social media after the cancelled House vote on Friday, U.S. voters showed there's a real hunger for such a solution: