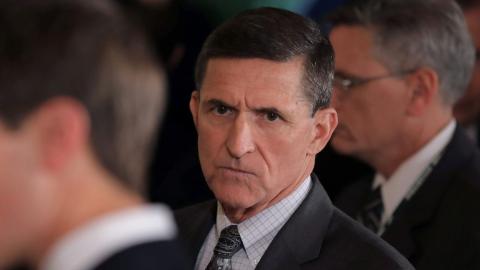 CNN national security analyst Juliette Kayyem cited unnamed sources and the fact that Michael Flynn has not been called upon to testify under oath before the House Intelligence Committee as evidence that the former Trump adviser may have "cut a deal with the FBI."

“It’s not that interesting to me because I don’t think they’ll be under oath,” Kayyem said on CNN Saturday night referencing the fact that other members of Trump's inner circle will testify. “What is interesting, is the one name not mentioned is a name I mention often on this show: Mike Flynn, the former national security adviser.”

“It is starting to look like, from my sources and from open reporting, that Mike Flynn is the one who may have a deal with the FBI and that’s why we have not heard from him for some time,” Kayyem continued.

Flynn, a retired U.S. Army Lieutenant General, was an early and prominent supporter of Donald Trump's presidential campaign and was named his National Security Adviser, a post which does not require Congressional approval, soon after Trump's victory.

Flynn stepped down in mid-February after it was disclosed that Flynn had lied to Vice-President Mike Pence about past contacts with Russian officials - President Trump later claimed he fired Flynn. Flynn has continued to stir controversy since leaving the administration, with the latest scandal involving his lobbying for Turkey and having to register as a foreign agent with the U.S. government.

Former CIA Director James Woolsey has accused the Trump administration's former national security adviser, Michael Flynn, of participating in a discussion with Turkish officials about possibly subverting the U.S. extradition process to remove a Turkish cleric from the United States.

The Wall Street Journal first reported Woolsey's comments and posted a video interview with him late Friday . A Flynn spokesman said Friday that Woolsey's claims are "false" and that "no such discussion occurred."

In the Journal interview, Woolsey says he walked into the middle of a discussion between Turkish officials and members of Flynn's firm, Flynn Intel Group, late in the evening of Sept. 19 at Essex House hotel in New York City.

Woolsey said the discussion generally involved removing cleric Fethullah Gulen from the U.S. without going through the lengthy extradition process, though he said it stopped short of outlining a specific plan to sweep the cleric out of the country. Turkish President Recep Tayyip Erdogan has sought Gulen's extradition from the U.S. after accusing the cleric of directing a failed coup last summer. The U.S. government has rebuffed that request, and Gulen, who has a green card and lives in Pennsylvania, has denied involvement.

Woolsey described the discussion as "brainstorming, but it was brainstorming about a very serious matter that would pretty clearly be a violation of law." Though, Woolsey noted that the discussion "did not rise to the level of being a specific plan to undertake a felonious act."

Flynn spokesman Price Floyd told The Associated Press that Flynn Intel Group's work never involved discussing removing Gulen from the United States by any means other than the extradition process. He confirmed that Woolsey attended the meeting but denied that it involved subverting the legal process.

"The claim made by Mr. Woolsey that General Flynn or anyone else in attendance discussed physical removal of Mr. Gulen from the United States during a meeting with Turkish officials in New York is false," Floyd said. "No such discussion occurred, nor did Mr. Woolsey ever inform General Flynn that he had any concerns whatsoever regarding the meeting, either before he chose to attend and afterward."

The meeting was part of lobbying work Flynn's firm was conducting on behalf of a company, Inovo BV, which is owned by Turkish businessman Ekim Alptekin.

Earlier this month, Flynn and his firm registered with the Justice Department as foreign agents for the work for Alptekin, saying that it could have benefited the Turkish government. Flynn's firm was paid $530,000 over the course of the contract, which ran from August through November while Flynn was a top Trump campaign adviser. Alptekin has told the AP that Flynn's firm registered as a foreign agent under pressure from the Justice Department.

As the AP reported earlier this month , Flynn's attorneys twice disclosed to advisers to President Donald Trump after the election that it was likely Flynn would need to register as a foreign agent for the work. The first discussion was with the Trump transition team while Flynn was being considered for the top national security post. After Flynn joined the Trump administration, his attorneys then informed the White House counsel's office that Flynn's foreign agent registration was imminent. The White House has confirmed both contacts.

In the video interview, Woolsey said he didn't know if he missed a caveat to the discussion because he arrived late to the September meeting. In addition to Woolsey and Flynn, others present included Alptekin, Flynn's business partner, Bijan Rafiekian, and two Turkish officials: Foreign Minister Mevlut Cavusoglu and Energy Minister Berat Albayrak, who is Erdogan's son-in-law. Alptekin has told the AP that he arranged the meeting.

Woolsey said he doesn't remember if Flynn actively participated in the discussion. "I don't recall who said what," Woolsey said in the Journal interview. Though in an interview with CNN, he said there "was at least some strong suggestion by one or more of the Americans present at the meeting to the Turks" that the U.S. would be able to get ahold of Gulen.

"It was suspicious. It was concerning, and I felt I needed to say something about it to someone, but was it a clear plot that they were going to seize him? No," Woolsey said during the CNN interview .

Woolsey has said he informed then-Vice President Joe Biden about the meeting through a mutual friend. Representatives for Biden declined to comment.

Woolsey, who served as CIA director under President Bill Clinton and briefly was a member of the Trump transition team, said he served on an advisory board for Flynn Intel Group but never did any work for the firm or received any payment from it.

Flynn, a former director of the Defense Intelligence Agency and a retired U.S. Army lieutenant general, was fired by Trump last month after Trump said Flynn misled Vice President Mike Pence and other White House officials about his conversations with Russia's ambassador to the U.S.

Flynn's ties to Russia have been scrutinized by the FBI and are part of House and Senate committee investigations into contacts between Trump campaign officials and Russians.