The Gig Economy Celebrates Working Yourself to Death

The American obsession with self-reliance, which makes it more acceptable to applaud an individual for working oneself to death than to argue that an individual working her/himself to death is evidence of a flawed economic system. The contrast between the gig economy’s rhetoric (everyone is always connecting, having fun, and killing it!) and the conditions that allow it to exist (a lack of dependable employment that pays a living wage) makes this kink especially clear. 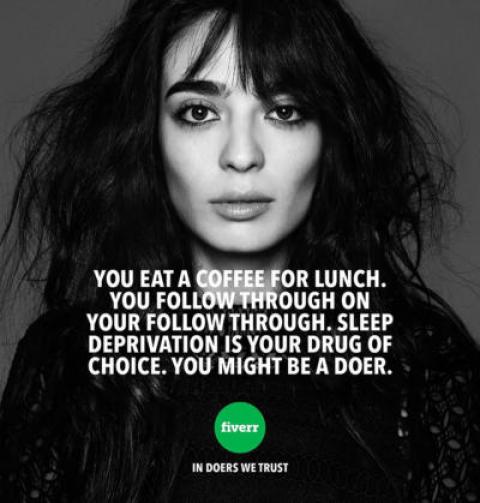 Fiverr, an online freelance marketplace that promotes itself as being for “the lean entrepreneur,” recently attracted ire for an ad campaign called “In Doers We Trust.”,photo credit: Courtesy Fiverr // The New Yorker

Last September, a very twenty-first-century type of story appeared on the company blog of the ride-sharing app Lyft. “Long-time Lyft driver and mentor, Mary, was nine months pregnant when she picked up a passenger the night of July 21st,” the post began. “About a week away from her due date, Mary decided to drive for a few hours after a day of mentoring.” You can guess what happened next.

Mary, who was driving in Chicago, picked up a few riders, and then started having contractions. “Since she was still a week away from her due date,” Lyft wrote, “she assumed they were simply a false alarm and continued driving.” As the contractions continued, Mary decided to drive to the hospital. “Since she didn’t believe she was going into labor yet,” Lyft went on, “she stayed in driver mode, and sure enough—ping!— she received a ride request en route to the hospital.”

“Luckily,” as Lyft put it, the passenger requested a short trip. After completing it, Mary went to the hospital, where she was informed that she was in labor. She gave birth to a daughter, whose picture appears in the post. (She’s wearing a “Little Miss Lyft” onesie.) The post concludes with a call for similar stories: “Do you have an exciting Lyft story you’d love to share? Tweet us your story at @lyft_CHI!”

Mary’s story looks different to different people. Within the ghoulishly cheerful Lyft public-relations machinery, Mary is an exemplar of hard work and dedication—the latter being, perhaps, hard to come by in a company that refuses to classify its drivers as employees. Mary’s entrepreneurial spirit—taking ride requests while she was in labor!—is an “exciting” example of how seamless and flexible app-based employment can be. Look at that hustle! You can make a quick buck with Lyft anytime, even when your cervix is dilating.

Lyft does not provide its drivers paid maternity leave or health insurance. (It offers to connect drivers with an insurance broker, and helpfully notes that “the Affordable Care Act offers many choices to make sure you’re covered.”) A third-party platform called SherpaShare, which some drivers use to track their earnings, found, in 2015, that Lyft drivers in Chicago net about eleven dollars per trip. Perhaps, as Lyft suggests, Mary kept accepting riders while experiencing contractions because “she was still a week away from her due date,” or “she didn’t believe she was going into labor yet.” Or maybe Mary kept accepting riders because the gig economy has further normalized the circumstances in which earning an extra eleven dollars can feel more important than seeking out the urgent medical care that these quasi-employers do not sponsor. In the other version of Mary’s story, she’s an unprotected worker in precarious circumstances. “I can’t pretend to know Mary’s economic situation,” Bryan Menegus at Gizmodo wrote, when the story first appeared. “Maybe she’s an heiress who happens to love the freedom of chauffeuring strangers from place to place on her own schedule. But that Lyft, for some reason, thought that this would reflect kindly on them is perhaps the most horrifying part.”

It does require a fairly dystopian strain of doublethink for a company to celebrate how hard and how constantly its employees must work to make a living, given that these companies are themselves setting the terms. And yet this type of faux-inspirational tale has been appearing more lately, both in corporate advertising and in the news. Fiverr, an online freelance marketplace that promotes itself as being for “the lean entrepreneur”—as its name suggests, services advertised on Fiverr can be purchased for as low as five dollars—recently attracted ire for an ad campaign called “In Doers We Trust.” One ad, prominently displayed on some New York City subway cars, features a woman staring at the camera with a look of blank determination. “You eat a coffee for lunch,” the ad proclaims. “You follow through on your follow through. Sleep deprivation is your drug of choice. You might be a doer.”

Fiverr, which had raised a hundred and ten million dollars in venture capital by November, 2015, has more about the “In Doers We Trust” campaign on its Web site. In one video, a peppy female voice-over urges “doers” to “always be available,” to think about beating “the trust-fund kids,” and to pitch themselves to everyone they see, including their dentist. A Fiverr press release about “In Doers We Trust” states, “The campaign positions Fiverr to seize today’s emerging zeitgeist of entrepreneurial flexibility, rapid experimentation, and doing more with less. It pushes against bureaucratic overthinking, analysis-paralysis, and excessive whiteboarding.” This is the jargon through which the essentially cannibalistic nature of the gig economy is dressed up as an aesthetic. No one wants to eat coffee for lunch or go on a bender of sleep deprivation—or answer a call from a client while having sex, as recommended in the video. It’s a stretch to feel cheerful at all about the Fiverr marketplace, perusing the thousands of listings of people who will record any song, make any happy-birthday video, or design any book cover for five dollars. I’d guess that plenty of the people who advertise services on Fiverr would accept some “whiteboarding” in exchange for employer-sponsored health insurance.

At the root of this is the American obsession with self-reliance, which makes it more acceptable to applaud an individual for working himself to death than to argue that an individual working himself to death is evidence of a flawed economic system. The contrast between the gig economy’s rhetoric (everyone is always connecting, having fun, and killing it!) and the conditions that allow it to exist (a lack of dependable employment that pays a living wage) makes this kink in our thinking especially clear. Human-interest stories about the beauty of some person standing up to the punishments of late capitalism are regular features in the news, too. I’ve come to detest the local-news set piece about the man who walks ten or eleven or twelve miles to work—a story that’s been filed from Oxford, Alabama; from Detroit, Michigan; from Plano, Texas. The story is always written as a tearjerker, with praise for the person’s uncomplaining attitude; a car is usually donated to the subject in the end. Never mentioned or even implied is the shamefulness of a job that doesn’t permit a worker to afford his own commute.

There’s a painful distance between the chipper narratives surrounding labor and success in America and the lived experience of workers. A similar conflict drove Nathanael West, in 1934, to publish the novel “A Cool Million,” which satirized the Horatio Alger bootstrap fables that remained popular into the Great Depression. “Alger is to America what Homer was to the Greeks,” West once wrote. His protagonist in “A Cool Million,” Lemuel Pitkin, is an innocent, energetic striver, tasked with saving his mother’s house from foreclosure. A series of Alger-esque plot twists ensue. But Pitkin, rather than triumphing, ends up losing his teeth, his eye, his leg, his scalp, and finally his thumb. Morris Dickstein, in his book “Dancing in the Dark: A Cultural History of the Great Depression,” notes, “The novel ends with Lem as a vaudeville clown being beaten nightly until he simply falls apart.” A former President named Shagpoke Whipple gives a speech valorizing Pitkin’s fate, extolling “the right of every American boy to go into the world and . . . make his fortune by industry.” Whipple describes Pitkin’s dismemberment—“lovingly,” Dickstein adds—and tells his audience that, through Pitkin’s hard work and enthusiastic martyrdom, “America became again American.”

[Jia Tolentino is a contributing writer for newyorker.com. Previously, she was the deputy editor at Jezebel and a contributing editor at the Hairpin. Her essays and criticism have appeared in the Times Magazine, Grantland, the Awl, Pitchfork, The Fader, Time, and Slate.]