South African anti-apartheid activist Ahmed Kathrada, who was sentenced to life imprisonment alongside Nelson Mandela, died Tuesday, aged 87. Affectionately known as “Uncle Kathy,” the liberation struggle stalwart spent 26-years in prison under the apartheid government and went on to be an open critic of President Jacob Zuma. He was one of the most senior African National Congress (ANC) leaders to criticize Zuma as allegations of government corruption mounted. 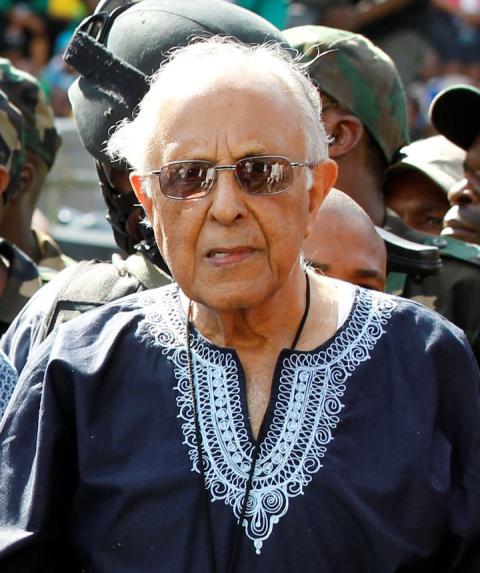 Veteran South African anti-apartheid activist Ahmed Kathrada died on Tuesday at the age of 87., Siphiwe Sibeko / Reuters // Reuters
Anti-Apartheid Leader Ahmed Kathrada Who Spent Many Years In Jail Alongside Nelson Mandela Dead At 87
He dedicated his life to fighting the racial injustice of white-minority rule.
March 28, 2017
Reuters // The World Post
CAPE TOWN (Reuters) - Veteran South African anti-apartheid activist Ahmed Kathrada, who was sentenced to life imprisonment alongside Nelson Mandela and went on to be an open critic of President Jacob Zuma, died on Tuesday aged 87.
Affectionately known as “Uncle Kathy,” the liberation struggle stalwart who spent 26-years in prison under the apartheid government, was hospitalized in Johannesburg this month after surgery to relieve blood clotting on the brain.
Kathrada’s foundation said his condition had deteriorated rapidly with pneumonia affecting both lungs. It announced his death at 6 a.m. local time.
President Jacob Zuma said Kathrada would be honored at an official state funeral and flags at government offices would fly at half-mast until then.
Nobel Peace Prize winner Archbishop Desmond Tutu said Kathrada helped inspire the world’s confidence in South Africa’s long battle against white-minority rule.
“May Ahmed rest in peace and rise in glory,” Tutu said in a statement. “May he rejoice in many heavenly cups of hot chocolate with his old friends and comrades.”
Kathrada, who dedicated his life to fighting the racial injustice of white-minority rule, was also one of the most senior African National Congress (ANC) leaders to criticize Zuma as allegations of government corruption mounted.
Last year, Kathrada wrote an open letter calling on Zuma to resign after a series of scandals, from using taxpayers money to upgrade his rural home to destabilizing financial markets by flip-flopping on cabinet appointments.
“I am not a political analyst, but I am now driven to ask: Dear Comrade President, don’t you think your continued stay as president will only serve to deepen the crisis of confidence in the government of the country?” Kathrada said then. 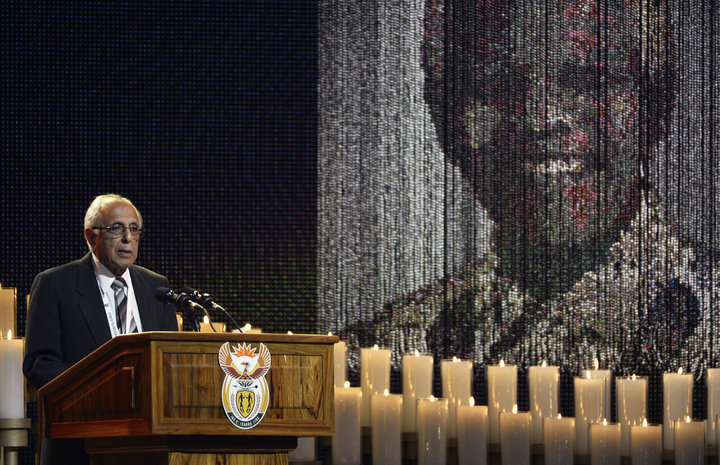 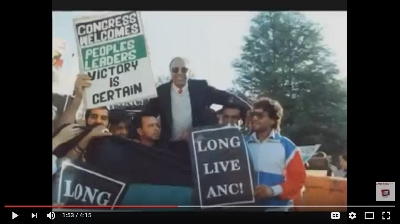 View here.
#AhmedKathrada Uncle Kathy Cde Ahmed Kathrada belongs to a generation that proclaimed 'Freedom in Our Lifetime' and his contribution is beyond measure. Rest In Peace!
Ahmed Kathrada biography in South African History Online - towards a people's history 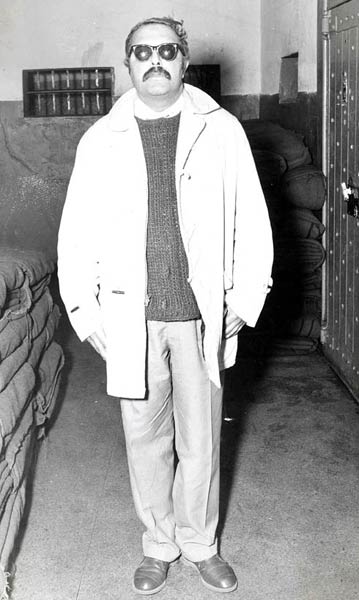 Ahmed Kathrada, shot taken by the police during the Liliesleaf raid. Source: South African National Archives
...In 1956, he was among the 156 Congress activists and leaders charged for High Treason. The trial continued for four years from 1957 to March 1961. Eventually, all 156 leaders were found not guilty and acquitted. Kathrada, Mandela and Sisulu were among the last 30 to be acquitted. Despite constant harassment by the police, Kathrada nevertheless continued his political activities.
Kathrada was restricted to the Johannesburg area in 1957, and following the Sharpeville Massacre in 1960, he was detained for five months during the State of Emergency, after which the ANC and PAC were banned. In 1961, Kathrada was arrested for serving on a strike committee that opposed Prime Minister Hendrik Verwoerd's plan to declare South Africa a Republic.
In December 1962, he was subjected to 'house arrest' for 13 hours a day and over weekends and public holidays. He went underground and continued to attend secret meetings in Rivonia - the underground headquarters of the ANC. The following year, Kathrada broke his banning orders, and went “underground”, to continue his political work.
In July 1963, the police swooped on Liliesleaf Farm in Rivonia, a Johannesburg suburb where Kathrada and other “banned” persons had been meeting. This led to the famous 'Rivonia Trial', in which eight accused were sentenced to life imprisonment with hard labour.
This was Kathrada’s 18th arrest on political grounds. Although he was then no longer a member of the Umkhonto we sizwe (MK) Regional Command, he was tried with Nelson Mandela, Walter Sisulu, Govan Mbeki, Dennis Goldberg, Raymond Mhlaba, Elias Motsoaledi and Andrew Mlangeni.  All the accused were charged with organising and directing MK, the military wing of the ANC, and were found guilty of committing specific acts of sabotage. In 1964, at the age of 34, he was sentenced to life imprisonment on Robben Island where he spent the next 18 years with his colleagues in the isolation section, known as B Section, of the Maximum Security Prison. His prisoner number was 468/64. This was a section where those considered by the Apartheid government as influential leaders or members of banned political organisations were kept. While he was still serving his sentence, the ANC bestowed on him, with its highest possible accolade, the Isitwalandwe Award.
Read more here.