Wait, does the United States have 1.3 million or more than 2 million people in prison? Are most people in state and federal prisons locked up for drug offenses? Frustrating questions like these abound because our systems of confinement are so fragmented and controlled by various entities. 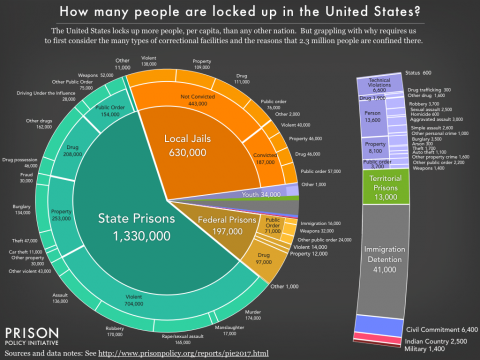 There is a lot of interesting and valuable research out there, but varying definitions make it hard — for both people new to criminal justice and for experienced policy wonks — to get the big picture.

This report offers some much needed clarity by piecing together this country’s disparate systems of confinement. The American criminal justice system holds more than 2.3 million people in 1,719 state prisons, 102 federal prisons, 901 juvenile correctional facilities, 3,163 local jails, and 76 Indian Country jails as well as in military prisons, immigration detention facilities, civil commitment centers, and prisons in the U.S. territories. And we go deeper to provide further detail on why people are locked up in all of those different types of facilities.

While this pie chart provides a comprehensive snapshot of our correctional system, the graphic does not capture the enormous churn in and out of our correctional facilities and the far larger universe of people whose lives are affected by the criminal justice system. Every year, 641,000 people walk out of prison gates, but people go to jail over 11 million times each year. Jail churn is particularly high because most people in jails have not been convicted. Some have just been arrested and will make bail in the next few hours or days, and others are too poor to make bail and must remain behind bars until their trial. Only a small number (187,000 on any given day) have been convicted, generally serving misdemeanors sentences under a year.

With a sense of the big picture, a common follow-up question might be: how many people are locked up for a drug offense? We know that almost half a million people are locked up because of a drug offense. The data confirms that nonviolent drug convictions are a defining characteristic of the federal prison system, but play only a supporting role at the state and local levels. While most people in state and local facilities are not locked up for drug offenses, most states’ continued practice of arresting people for drug possession destabilizes individual lives and communities. Drug arrests give residents of over-policed communities criminal records, which then reduce employment prospects and increase the likelihood of longer sentences for any future offenses.

All of the offense data presented comes with an important set of caveats. A person in prison for multiple offenses is reported only for the most serious offense so, for example, there are people in prison for “violent” offenses who might have also been convicted of a drug offense. Further, almost all convictions are the result of plea bargains, where people plead guilty to a lesser offense, perhaps of a different category or one that they may not have actually committed.

And many of these categories group together people convicted of a wide range of offenses. For example, “murder” is generally considered to be an extremely serious offense, but “murder” groups together the rare group of serial killers, with people who committed acts that are unlikely for reasons of circumstance or advanced age to ever happen again, with offenses that the average American may not consider to be murder at all. For example, the felony murder rule says that if someone dies during the commission of a felony, everyone involved can be as guilty of murder as the person who pulled the trigger. Driving a getaway car during a bank robbery where someone was accidentally killed is indeed a serious offense, but many may be surprised that this is considered murder.

This “whole pie” methodology also exposes some disturbing facts about the youth entrapped in our juvenile justice system: Too many are there for a “most serious offense” that is not even a crime. For example, there are almost 7,000 youth behind bars for “technical violations” of the requirements of their probation, rather than for a new offense. Further, 600 youth are behind bars for “status” offenses, which are “behaviors that are not law violations for adults, such as running away, truancy, and incorrigibility.”

Turning finally to the people who are locked up criminally and civilly for immigration-related issues, we find that 16,000 people are in federal prison for criminal convictions of violating federal immigration laws. A separate 41,000 are civilly detained by U.S. Immigration and Customs Enforcement (ICE) separate from any criminal proceedings and are physically confined in federally-run or privately-run immigration detention facilities or in local jails under contract with ICE. (Notably, these categories do not include immigrants represented in other pie slices because of non-immigration related criminal convictions.)

Now, armed with the big picture of how many people are locked up in the United States, where, and why, we have a better foundation for the long overdue conversation about criminal justice reform. For example, the data makes it clear that ending the War on Drugs will not alone end mass incarceration, but that the federal government and some states have effectively reduced their incarcerated populations by turning to drug policy reform. Looking at the “whole pie” also opens up other conversations about where we should focus our energies:

And once we have wrapped our minds around the “whole pie” of mass incarceration, we should zoom out and note that being locked up is just one piece of the larger pie of correctional control. There are another 840,000 people on parole (a type of conditional release from prison) and a staggering 3.7 million people on probation (what is typically an alternative sentence). Particularly given the often onerous conditions of probation, policymakers should be cautious of “alternatives to incarceration” that can easily widen the net of criminalization to people who are not a threat to public safety.

Now that we can see the big picture of how many people are locked up in the United States in the various types of facilities, we can see that something needs to change. Looking at the big picture requires us to ask if it really makes sense to lock up 2.3 million people on any given day, giving this nation the dubious distinction of having the highest incarceration rate in the world. Both policymakers and the public have the responsibility to carefully consider each individual slice in turn to ask whether legitimate social goals are served by putting each category behind bars, and whether any benefit really outweighs the social and fiscal costs.

We’re optimistic that this “whole pie” approach can give Americans, who are ready for a fresh look at the criminal justice system, some of the tools they need to demand meaningful changes to how we do justice.

All Prison Policy Initiative reports are collaborative endeavors, but this report builds on the successful collaborations of the 2014, 2015 and 2016 versions. For this year’s report, the authors are particularly indebted to César Cuauhtémoc García Hernández and Mary Small of the Detention Watch Network for their feedback and research pointers on immigration detention, Stephen Raher for general research assistance, Jordan Miner for upgrading our slideshow technology and Elydah Joyce for helping edit one of the graphics.

We thank the John D. and Catherine T. MacArthur Foundation Safety and Justice Challenge for their support of our research into the use and misuse of jails in this country. We also thank the Public Welfare Foundation and each of our individual donors who give us the resources and the flexibility to quickly turn our insights into new movement resources.

Go to original source for research notes and date.

Peter Wagner is an attorney and the Executive Director of the Prison Policy Initiative. He co-founded the Prison Policy Initiative in 2001 in order to spark a national discussion about the negative side effects of mass incarceration. His research and advocacy on the issue of prison gerrymandering have led four states and more than 200 local governments to end prison gerrymandering.  Some of his most recent work include Following the Money of Mass Incarceration, uncovering that prisons are disproportionately built in White areas, and working with Josh Begley to put each state’s overuse of incarceration into the international context.  He is @PWPolicy on Twitter.

Bernadette Rabuy is the Senior Policy Analyst at the Prison Policy Initiative. Bernadette produced the first comprehensive national report on the video visitation industry, Screening Out Family Time: The for-profit video visitation industry in prisons and jails, finding that 74% of local jails that adopt video visitation eliminate traditional in-person visits. Her research has played a key role in protecting in-person family visits in jails in Portland, Oregon and the state of Texas.  In her other work with the Prison Policy Initiative, Bernadette has worked to empower the criminal justice reform movement with key but missing data through the annual Mass Incarceration: The Whole Pie reports, Detaining the Poor: How money bail perpetuates an endless cycle of poverty and jail time, and Following the Money of Mass Incarceration.  Bernadette is on Twitter at @BRabuy