To Abolish Prisons and Militarism, We Need Anti-Imperialist Abolition Feminism

“In this society, safety and security will not be premised on violence or the threat of violence; it will be based on a collective commitment to guaranteeing the survival and care of all peoples.” 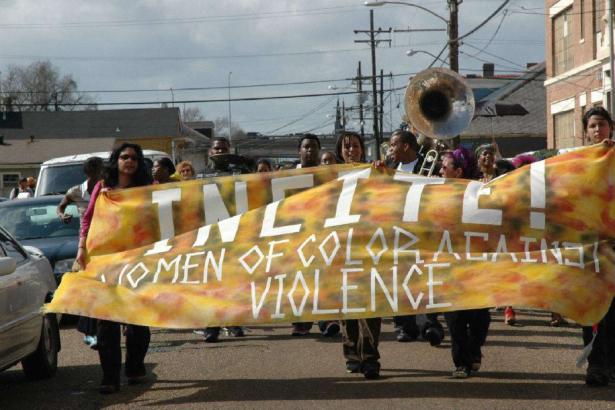 Abolition begins with dismantling the heterosexist, racial and imperial framework of the military and prison industries.,INCITE! Community News via Facebook
“In this society, safety and security will not be premised on violence or the threat of violence; it will be based on a collective commitment to guaranteeing the survival and care of all peoples.” — Critical Resistance/INCITE! Statement on Gender Violence and the Prison Industrial Complex

Since the turn of the 21st century, the prison- and military-industrial complexes have not only expanded, but they are revealing now more than ever how deeply intertwined they are. At this moment of multiple global crises and the spirit of prison abolition in the air, we must seek paths toward confronting militarism, imperialism and the prison-industrial complex at once.

We write as former co-organizers of the feminist antiwar and anti-militarism task forces within the INCITE! movement of radical feminists of color organizing to end the interconnected realities of state violence and violence within our communities. Since its inception in 2000, INCITE! recognized that it is impossible to seriously address sexual/domestic violence within communities of color without addressing these larger structures of violence, such as militarism, prisons, attacks on immigrants’ rights and Indian treaty rights, economic neocolonialism, and the medical industry. INCITE! organizers understood the entrenched relationship between the military-industrial complex and the prison-industrial complex. Our organizing against U.S.-led militarism and war during the decade following the attacks of September 11, 2001, emerged in tandem with INCITE!’s work toward abolishing prisons: a political vision insisting that prisons and policing do not keep people safe and that to build safe and healthy communities we must move away from relying on carceral strategies like punishment, containment and prisons.

The INCITE! movement offered up what we call anti-imperialist abolitionist feminism: a vision insisting that in order to abolish the prison-industrial complex we are going to need to dismantle the colonial heterosexist, racial and imperial underpinnings of carcerality. We believe that this approach can expand anti-militarist and abolitionist struggles through a politics of joint struggle or coalition. As we reflect on this movement, we are reminded of the urgent need to continue to grow coalitional anti-militarist abolitionist movement approaches today.

In order to move toward an anti-imperialist abolition feminist future, we must start by bearing witness to some of the many ways the prison- and military-industrial complexes are bound together. Here are just a few recent instances that make this connection plain:

In order to abolish the prison-industrial complex we are going to need to dismantle the colonial heterosexist, racial and imperial underpinnings of carcerality.

Like generations before us, we are facing the ongoing life of colonialism. The U.S. was founded on and grows its power through the tactic of genocide, including the colonization of Indigenous peoples and lands, slavery, exploitation of migrants, mass incarceration, increasing police violence and economic warfare, all of which rely upon sexualized violence, as INCITE!’s 2001 antiwar packet notes. This analysis views U.S. militarism and the prison-industrial complex as simultaneously essential to sustaining the power of the U.S. as an empire today. With a determined commitment to eschew its derivatives and mobilize the end of U.S. domination, INCITE!’s antiwar posters testified, “Genocide ≠ Justice: Only We Can Liberate Ourselves.”

How might a coalitional anti-imperialist abolitionist feminism approach some of the most urgent issues today? A coalitional approach to abolition commits us to take up the struggles to decolonize and to dismantle racial capitalism, heteropatriarchy, militarism, war and border control. These examples of how coalitional approaches are addressing these struggles emanate from the collective theories and practices of coalitional feminist-of-color insurgencies, including INCITE! We can witness this approach today in political formations mobilizing at the coalitional nexus of many movements. As we strive to guarantee the present and future survival and care of all peoples today, we must grow coalitional and joint struggle strategies like anti-imperialist abolition feminism.

Foregrounding a critique of the U.S. nation-state reveals that the ongoing life of U.S. empire depends on the colonial strategy to capture and confine both lands and peoples, in part to extract their gifts. The prison-industrial complex combined with the U.S.-México border and war are functions of this colonial strategy.

The potential for those same social conditions and practices that make prisons unfathomable also make war, empire and colonial occupation no longer relevant.

Our hope is that calls to end prisons and policing recognize that the entire scope of violence must be faced if we are to survive.

Today, we can find these discussions in the praxis of building feminist abolitionist futures through transformative justice and community accountability practices, harm reduction and mutual aid. In an effort to further the integration of anti-imperialism and prison abolition, we are reminded of the urgent Black feminist abolitionist vision that potentiates a set of social conditions where prisons are unfathomable. And we posit that the potential for those same social conditions and practices that make prisons unfathomable also make war, empire and colonial occupation no longer relevant, or even imaginable.

How do we do the work of undoing carcerality in the broadest sense? How do we undo the work that carcerality does to stitch together a social landscape productive of strengthening the U.S. nation-state and its global racist, capitalist, heteropatriarchal expansion, imaginaries and structures? How can movements advance abolition while mobilizing in ways that undo the colonial-imperial underpinnings of carcerality? How do we counter militaristic practice through our daily life, socialities and intimacies in ways that undo the inner workings of empire with its attendant divisions, extractivist accumulation, violence and torture? What socialities, relationalities and intimacies get animated at the convergence of the decolonial, counter-carceral and anti-imperialist ways of being in the world? What do the decolonial, anti-militarist and abolitionist commitments and sensibilities foster in our relations with each other, with the land, with ourselves? What other colonial institutions and techniques of violence grow in irrelevance as we invoke the decolonial and abolitionist imagination and corresponding practices?

One of the most salient lessons in our years organizing with INCITE! was that fostering alternatives emerge in practice, working collectively and in coalitions. Against the capitalist approach that urges us to produce — Presto! you made an abolitionist society! — INCITE! taught us that movement work is constantly becoming, that we build on legacies and lessons learned through practice. The goal then, of a decolonial abolitionist feminism is not a liberated utopian world without police, prisons or war, but rather a process where over time we learn and remember the skills for living better, in better relation with one another and all life, on the path to ending violence.

So, what can we do to build a world without policing or militarism? In addition to asserting that the police and prisons do not keep us safe or protect us, indeed the same can be said about the U.S. nation-state and its imperialist wars and policing of its borders. Perhaps we don’t need them anymore. When we defund the military, ICE and the police, we must also defund U.S. support for authoritarian dictators, puppet regimes and Israeli settler-colonialism, which sustain the global economic networks of U.S.-backed prisons, torture of activists, policing, border walls and control, and secret prisons/black sites. Our hope is that calls to end prisons and policing recognize that the entire scope of violence must be faced if we are to survive.

And if we were to abolish courts and prisons and cops, border patrol and ICE and U.S.-led empire, with what would we be left? Everything.

By affirming an anti-colonial and anti-imperialist feminist abolition, we are also affirming the core belief that if we want to abolish prisons, we are going to have to dismantle systems that cage and punish while also dismantling the structure of the U.S. nation-state and its local and global extractivist and expansionist systems of genocide and war, ethnic cleansing, displacement and dispossession.

Coalitional feminist of color movements, as we witnessed with INCITE!’s organizing at the turn of the 21st century, coalesce the visionary impulses of generations of struggles against slavery, displacement, genocide, feminicide and military invasions which are produced by the conditions of colonial heteropatriarchy and racial capitalism. The convergence of shared struggles for liberation today can enliven the potentiating ancestor-inspired dreams and practices of nurturing feminist of color socialities of care and nurturing relations with the land and each other through the wielding of cultural wisdom practices and a commitment to practices of just and accountable self-determination. And if we were to abolish courts and prisons and cops, border patrol and ICE and U.S.-led empire, with what would we be left? Everything.

Truthout‘s journalism has survived on $10 and $20 donations for two decades! Can we count on you to make a monthly or one-time donation today?Donate Now

Nadine Naber is professor of gender and women’s studies and global Asian studies, and interim director of the Institute for Research on Race and Public Policy at the University of Illinois at Chicago. She is the author and/or co-editor of five books, including Arab America: Gender, Cultural Politics, and Activism (NYU Press, 2012) and Color of Violence (Duke University Press, 2016). She is a TEDx speaker, board member of the Arab American Action Network, co-founder of Mamas Activating Movements for Abolition and Solidarity, founder of Liberate Your Research, founder of the Arab American Cultural Center, and co-founder of the Arab and Muslim American Studies Program (University of Michigan). Nadine is a Public Voices fellow and columnist for the Chicago Reporter.

Clarissa Rojas Durazo grew up in the border cities Mexicali, Baja California and Calexico, California. She teaches Chicanx Studies and is affiliated with Cultural Studies and Gender Studies at the University of California, Davis. Rojas Durazo is co-editor of Color of Violence: the INCITE! Anthology and Community Accountability: Emerging Movements to Transform Violence. She is an internationally published poet whose writing appears most recently in Sinister Wisdom Journal.