The Zuma Dilemma: Hell No, He Just Won’t Go!

South African President Jacob Zuma's reshuffling of Cabinet members without consulting the ANC has created a crisis. The trade union federation Cosatu and the South African Communist Party, have called upon him to resign. Zuma's opponents charge that he has disrespected the ANC and the country and that those who still protect him do so out of their own self-interest. He won’t go of his own volition and needs to be made to do so. 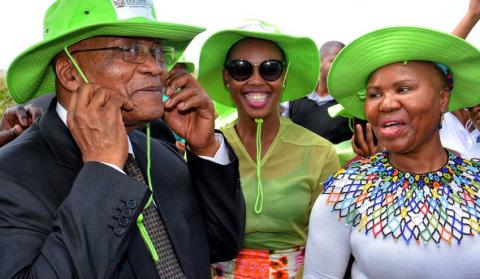 The ANC is facing a bombardment of calls demanding that President Jacob Zuma step down, be recalled or voted out in Parliament. The ANC’s stalwarts and military veterans, as well as alliance partners, the South African Communist Party (SACP) and Cosatu, are also ratcheting up the pressure with calls for Zuma to go. But Zuma’s supporters are fighting back, arguing that the ANC should close ranks and lashing out at those who criticised Zuma’s Cabinet reshuffle, including the party’s top officials. A meeting of the ANC’s national working committee (NWC) on Tuesday night appears to have swayed in Zuma’s favour, meaning that the ultimate Teflon man might wriggle out once again. For now.

The neatest way for Zuma to be removed from office would be for the ANC to execute the same strategy they used to end Thabo Mbeki’s presidency. A decision by the ANC national executive committee (NEC) to recall Zuma would compel him to resign and go away quietly.

But for as long as Zuma remains president of the ANC, it is extremely difficult to dislodge him. He continues to hold power in the party and sits in the structures where his leadership is discussed. And unlike Mbeki, Zuma is simply refusing to heed the demands for him to leave office, believing these are part of a grand conspiracy against him.

Zuma’s decision to fire Finance Minister Pravin Gordhan and his deputy Mcebisi Jonas, as part of a sweeping late-night reshuffle last week, resulted in a sub-investment downgrade by ratings agency S&P on Monday. The country is bracing for a ratings decision from Fitch on Friday, while Moody’s has placed South Africa’s credit rating on review.

In the wake of the reshuffle,  Zuma faced unprecedented criticism from his deputy Cyril Ramaphosa, ANC secretary general Gwede Mantashe and treasurer general Zweli Mkhize, all of whom spoke out against his decision to fire Gordhan and Jonas on the basis of a dubious intelligence report.

A chorus of organisations have since spoken out against Zuma, saying he is unfit to be president. Around 65 civil society organisations have written to Speaker of Parliament Baleka Mbete asking that she accede to the request from opposition parties to schedule a special sitting of the National Assembly to debate a motion of no confidence in the president. The Democratic Alliance, Economic Freedom Fighters and a range of smaller parties have joined forces to lobby ANC MPs to vote according to conscience in favour of the motion.

On Tuesday, Cosatu, the organisation that was most instrumental in his rise from the ashes to the presidency, join the refrain for Zuma to step down.

“We think that after all his undeniable contribution to both the movement and government, the time has arrived for him to step down and allow the country to be led forward by a new collective at a government level. We no longer believe in his leadership abilities and we shall be communicating that decision to our ally the ANC,” the Cosatu central executive committee said in a statement.

The SACP’s politburo met for a second time on Monday and reinforced the call they made on Friday for Zuma to resign.

The ANC’s integrity commission, made up of party elders, met with ANC officials on Monday to discuss their concerns about the reshuffle and a request they made to Zuma in December to resign. According to a letter the integrity commission sent to Mantashe, they are scheduled to meet Zuma again on Sunday and “intend repeating our request for the president to resign as president of the republic and of the ANC”.

A group of over 100 ANC stalwarts and former military veterans met in Johannesburg on Tuesday and resolved that Zuma should be recalled by the ANC.

“In view of the crisis facing the organisation, we are of the view that the need for the ANC to recall the president is long overdue,” Murphy Morobe said at a media briefing. He said the group aligned itself with the views of the late Rivonia trialist Ahmed Kathrada, who had written to Zuma pleading with him to step down.

Former ANC secretary general Cheryl Carolus slammed Zuma for behaving in an “anti ANC way”. She said Zuma had “delinked” himself from the ANC by not consulting the other ANC officials on his decision to reshuffle the Cabinet and had become “a law unto himself”.

“We are very worried… President Zuma has crossed the line. As an ANC deployee, he is not representing own jacket but represents the wishes of ANC,” she said.

Carolus said that for the reshuffle to take place during a period of mourning in the wake of Kathrada’s death was “breathtakingly callous”. She also hit out at Zuma for not bothering to call to console Kathrada’s widow Barbara Hogan, a former Umkhonto we Sizwe soldier who served 10 years in prison.

The manner in which the reshuffle took place and the recall of Gordhan from an investment roadshow in London was to inflict “maximum humiliation”, Carolus said.

The expectation of the stalwarts and former military veterans is that the ANC heed their demand to recall Zuma.

“We should not reach the point where there is a vote in Parliament. The ANC must do the right thing,” said Mary Metcalfe.

A number of religious and civil society organisations have come out in support of mass protest action to pressure the ANC to act against the president.

Zuma seems to have insulated himself from the anger and noise in society. At the launch of Transnet’s first locally engineered and manufactured train in Pretoria on Tuesday, he said he was proud to have added young ministers to the Cabinet. While not referring directly to the downgrade, he sought to calm jitters of investors by saying that while there was a change in the political leadership in finance, government’s overall policy orientation remained the same.

The media was kept away from Zuma and prevented from asking him questions about the reshuffle and downgrade. While he has been keeping up appearances and looked jolly for the photo ops on the train, behind the scenes Zuma is fighting for his life. He and his allies are determined to prevent the ANC from sanctioning him over the reshuffle.

An NWC meeting on Tuesday afternoon was extended to include ANC office-bearers from the provinces. The leaders of the ANC Women’s League and ANC Youth League (ANCYL) were also present. This means that the meeting was stacked with Zuma’s supporters who argued that Zuma had the prerogative to make changes to the Cabinet and was not obliged to consult ANC officials about who he hired and fired.

Zuma’s supporters also wanted to pummel Ramaphosa, Mantashe and Mkhize to backtrack on their criticism of Zuma and acknowledge that they were out of order by speaking publicly against him.

One of Zuma’s most ardent defenders, NEC member Nomvula Mokonyane, came out with guns blazing at an ANCYL rally in Germiston on Tuesday night. She vowed that Zuma would remain ANC president until the party’s December conference and would finish his term as president of the republic in 2019.

Although Mokonyane was speaking while the NWC was still in progress, she announced that the ANC’s top six officials had resolved their differences and were now united. She said this would be evident at a media briefing the ANC was having on Wednesday. An email sent out in error on the ANC’s media list disclosed a long list of points that supported Mokonyane’s assertion that Zuma was off the hook and that his critics were pounded at the NWC. The list could not be verified as the minutes or notes reflecting the discussion at the NWC.

At the rally, Mokonyane slammed ANC members working with opposition parties to remove Zuma through the motion of no confidence, calling them “hyenas in sheepskin”.

“You can’t support opponents of the national democratic revolution and say you’re doing it to save South Africa,” she said.

“No member who got into Parliament out of his conscience,” Mokonyane said, warning ANC members against breaking ranks and voting according to conscience with the opposition. She said the ANC would turn the motion of no confidence into a motion of confidence and would not allow a secret ballot.

“Our struggle has been against a minority that wants to dominate a majority. You can’t have a minority wanting to dictate to the majority the future of this country,” said Mokonyane. “We’ll be there in Parliament. You can’t not toe the line of the ANC.”

Mokonyane also lashed out at the integrity commission for “leaking” their letter about Zuma before speaking to him. “Their integrity is now under question,” she said, astoundingly, about the body led by one of the last two remaining Rivonia trialists, Andrew Mlangeni.

Mokonyane vowed that no action would be taken against the president despite the intensifying pressure inside and outside the ANC. To further thumb her nose at Zuma’s critics, she announced that there would be a party in Kliptown next week to celebrate Zuma’s 75th birthday.

Mokonyane called on the ANCYL and military veterans association to defend the ANC against protestors. One of the league leaders responded with a threat to the DA that they would be confronted with “sjamboks and other weapons” during their planned march on Friday.

This is the type of defence Zuma relies on to keep him in power. Thuggery and bullying, even if it discredits honourable people in the ANC and society, is the only option left to shield Zuma as his presidency disintegrates.

Most of the people who defend him are implicated in the patronage network that rotates around the Gupta family. He has lost the support of his traditional allies, the SACP and Cosatu, as well as the respect of the elders of the liberation movement. He has turned the ANC on itself and would rather watch it devour itself than release it from his disastrous leadership.

Zuma’s political capital is completely demolished. He has placed the ANC in the untenable situation where it has to tear itself apart both to keep him as president and to try to remove him. Zuma’s brutes are determined to beat into submission all those who want to act in the interests of the country against him – whether in ANC structures or through a vote in Parliament.

Many people, including the stalwarts, expect the ANC “to do the right thing”. It is evident that the ANC is so paralysed by factional battles and the Zuma-Gupta contagion that it is incapable of doing do.

But now that so many people in the ANC, including Ramaphosa, Mantashe and Mkhize, have stuck their necks out, there is no turning back - even if they take heavy body blows in the skirmishes. The ANC has to find a way to purge itself of Zuma in order to rescue the country from the rolling disaster of his presidency. Zuma has disrespected the ANC and the country in every possible way and those who still protect him do so out of their own self-interest. He won’t go of his own volition and needs to be made to do so.

The question that should be considered by ANC members in the leadership structures and in Parliament is this: If Zuma believes he is not bound by the ANC in how he conducts himself, why should they be? Perhaps the best way to release the country from the Zuma chokehold is to follow the leader.