Both the United Nations Charter and the Chemical Weapons Convention provide means for international investigation and sanction of the use of prohibited weapons. Unilateral use of military force in these circumstances by the United States, which has not been attacked and is not in imminent danger of attack, is unlawful. 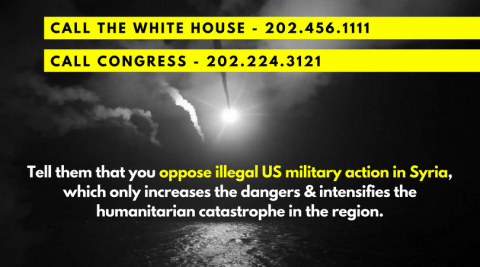 Once again, the United States is sliding towards a wider war in the Middle East. Only two days after the first allegations of the use of chemical weapons against a village in Syria, the United States has attacked an air base in Syria with more than fifty sea launched cruise missiles. With both Russian and U.S. forces on the ground and in the air in Syria, the risk of a wider war is real.

Both the United Nations Charter and the Chemical Weapons Convention provide means for international investigation and sanction of the use of prohibited weapons.  Unilateral use of military force in these circumstances by the United States, which has not been attacked and is not in imminent danger of attack, is unlawful.

Call the White House 202-456-1111 and your Senators and Congressional Representatives 202-224-3121 and tell them that military action only increases the dangers and intensifies the humanitarian catastrophe in the region.

Activate your community. Protest, vigil or march to Say No to War! Let Trump know that bombing is not the answer.

There should be no further strikes against the Syrian military or government. U.S. forces in Syria should be withdrawn. There must be an independent investigation of the chemical attack through the Organization for the Prohibition of Chemical Weapons, and immediate, urgent diplomatic efforts to end the war in Syria.

This attack, dangerous as it is in itself, has broader implications. It underscores how impulsive Donald Trump is, and how willing to make decisions on matters of life and death very quickly, on the basis of sparse evidence. More worrisome still, it shows us that there are no elements, either in the broader government or in the military, that appear willing or able to restrain him. It is urgent that the people of the United States act to prevent a wider war.

Two days ago, major newspapers reported that a chemical attack had occurred in a village in Syria, killing and injuring many civilians. Despite the fact that there has been no investigation by any international agency that might confirm a chemical weapons attack occurred or who is responsible, the U.S. military now has launched a direct attack on Syria’s military.

Since World War I, use of chemical weapons has been viewed almost universally as monstrous, and as a violation of treaty-based and customary standards of international humanitarian law.  If they were used in Syria by any party, that action should be condemned, and all states should cooperate in identifying the perpetrators and in pursuing their apprehension and prosecution by all legal means.  There is no provision of international law, however, that allows countries to determine for themselves who they believe the guilty parties to be, and to punish them by acts of war against the territory of a sovereign state. International treaties outlawing chemical weapons and prohibiting their use provide no special exception for such ad hoc use of military force.  To the contrary, the Chemical Weapons Convention, the most comprehensive instrument concerning chemical weapons, provides for investigation of alleged violations by specialist bodies constituted by the Convention and recourse to the United Nations to authorize any use of force.

These events are occurring amidst a civil war, with outside forces ranging from neighboring states to nuclear-armed great powers aiding an array of warring groups. Russia and the United States, both nuclear-armed, each have troops on Syrian soil and aircraft flying combat missions against targets inside Syria’s borders. Even if the principle is accepted that the world community has a responsibility to protect people from the violence of their own governments, any such action must be crafted to reduce, rather than increase, the level of violence and chaos. Unilateral military strikes by a country already backing factions in a complex civil war are far more likely to intensify an already grave humanitarian crisis, and also could lead to a cycle of confrontation amongst heavily-armed militaries that easily could spiral out of control. In this dangerous context, it is especially important that transparent, credible procedures be followed for investigation of the allegations of chemical weapons use and a determination of the responsible party or parties, as well as for actions to prevent further use and to punish those culpable.

All U.S. military action against Syria’s government and military should cease immediately. All parties in the region, and especially the United States and Russia, which each hold vetoes in the Security Council, should take all necessary measures to facilitate a speedy and thorough investigation of the alleged attack, and to assure that those responsible are held to account. This incident only underscores the danger of this ongoing war and its terrible human toll. All the warring parties and the states that support them must renew a determined pursuit of the war’s end, and of a wider peace.

Call the White House 202-456-1111 and your Senators and Congressional Representatives 202-224-3121 and tell them that military action only increases the dangers and intensifies the humanitarian catastrophe in the region.