Director Larraín has stated that the way Latin Americans think is shaped by poetry, by metaphor, and that his film is partly concerned with the power of poetry to move and influence. We are shown Neruda’s huge influence, as a communist poet, over his natural constituency: the ordinary working man... But what we do not see in the film is the immensely moving capacity of poetry to break down barriers between people of diametrically opposed political beliefs. 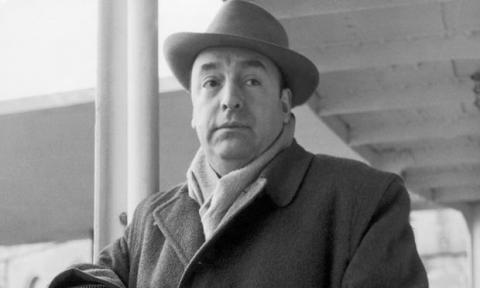 Alfred Hitchcock’s Vertigo, Billy Wilder’s Sunset Boulevard, Andrei Tarkovsky’s Ivan’s Childhood: all Pablo Larraín’s favourite films toy imaginatively with time. The director’s own much-praised 2016 drama, Jackie, is similarly non-linear. So it should come as no surprise that his new film about Pablo Neruda playfully and provocatively distorts the facts of an extraordinary year in the life of the Chilean Nobel prize-winning poet: Neruda is an anti-biopic.

The film is set in Santiago in 1948, at the outset of the cold war. The facts are these: already renowned for his Twenty Love Poems and a Song of Despair, Neruda stood up in the senate (where he represented the Communist Party) and condemned Chile’s then-president, Gabriel González Videla, for turning against the party that had helped bring him to power and for behaving as thuggishly as Franco in Spain. (Neruda had witnessed Franco’s brutality – and the murder of his friend and fellow poet, Federico García Lorca – while Chilean consul in Madrid in 1936.)

In Neruda, Larraín tells much of the story from the perspective of the fedora-wearing police inspector, Óscar Peluchonneau (Gael García Bernal), who is leading the manhunt. After it is decided that Neruda must flee Chile, the poet (Luis Gnecco) exclaims: “I’m not going to hide under the bed. This has to become a wild hunt!” And wild it certainly becomes. Both he and his pursuer crave fame. Both want to be remembered – one as a poet, the other for capturing a poet. But both come reluctantly to realise, especially in the film’s increasingly elegiac second half, that they are, in some way, validating each other.

Larraín has read the books about Neruda. He is an admirer of realistic film-makers such as Mike Leigh, but says he is incapable of making such movies himself: “For me, cinema is related to the old magicians, the illusionists.” Instead, he sought a structure more akin to a story by Jorge Luis Borges: “I realised it could work as a meta-fictional labyrinth. All these characters – Neruda, Óscar the detective, the narrator who narrates himself into the story – are creating each other because they need each other to tell the story. The film is about storytelling and how we need to tell stories in order to survive life.”Neruda was deprived of his parliamentary immunity and forced into hiding, rushed from one safe house to another, sometimes in the middle of the night, to avoid being captured. Had he been, he might well have been taken to the concentration camp at Pisagua, in the northern Atacama desert (where the commandant was a certain Augusto Pinochet – 25 years before he led the military coup against president Salvador Allende). Although we do not see this in the film, Neruda eventually escaped across the Andes on horseback into Argentina and made his way to Europe using the passport of his fellow writer, the Guatemalan novelist, Miguel Ángel Asturias.

Indeed, at one point Peluchonneau asks: “Am I fiction?” There is an irony here: Peluchonneau really existed, but his son, Jorge Peluchonneau Cádiz, has said that his father emerges unrecognisable in the film.

The movie is complex and multilayered. Larraín maintains it has elements of film noir, cat-and-mouse chase thriller, road movie, western and black comedy. Neruda, himself a lifelong lover of detective novels, would have enjoyed the suspense. However, it also indulges in Buñuelesque surrealism, which the poet had rejected at this time in his life. In the opening scene Neruda is seen pissing in the chamber of the Santiago senate, which mysteriously doubles as an opulent urinal, a scene that could have come straight from Buñuel. Elsewhere, Larraín injects Hitchcockian artifice: for example, the use of an obvious back projection as Peluchonneau is driving his car.

Gabriel García Márquez called Neruda “the greatest poet of the 20th century in any language”. Carlos Fuentes said he was “the King Midas of poetry: everything he touched turned to gold.” Larraín, however, is not interested in reverentially reinforcing such reputations, but rather in capturing a bigger picture. As he told one interviewer: “I’m Chilean. Neruda is in the water, in the earth, in the trees … This is a movie about the Neruda cosmos.”

The film’s world certainly looks sumptuous, thanks to the chiaroscuro cinematography of Sergio Armstrong (Larraín’s regular photographer). And the screenplay, by Guillermo Calderón, for all its detachment from historical veracity, is witty and cynical. Even so, it came as a shock (to me, at least) to hear Neruda turn to his second wife, the Argentinian Delia del Carril (Mercedes Morán) and declare: “You suffocate me. I used to be a prince. Look what you turned me into.” In fact, Delia herself was a talented painter and an enormously cultured woman whom Neruda adored and who was instrumental in firing his political commitment during the Spanish civil war.

Larraín does allow genuine details from the poet’s life to slip in. Neruda requests textbooks, especially on natural history, to help him in writing his epic work, Canto General (with its twin themes of betrayal: the personal betrayal by President Videla and the savage betrayal of pre-Columbian civilisation by the Spanish conquistadors). Many of the people who harboured Neruda in hiding assured me that he frequently made requests for such books at this time. He did disguise himself as a heavily bearded ornithologist to escape the clutches of the authorities. (It was a wonderfully apt choice – Neruda was exceptionally knowledgeable about Chile’s birdlife and would go on to write a delightful collection, The Art of Birds, in 1966.) And Neruda’s close friend, Pablo Picasso, did give his one and only public address in support of the fugitive poet.

The whole film is powered by adventurous directorial pep and panache, and by superb performances, but occasionally Larraín makes too many sacrifices in his determination to flee the facts. According to the poet’s memoirs, when Neruda hid on the estate of the rightwing mill owner, Pepe Rodríguez – a friend of President Videla, who would have been expected to hand over Neruda to the authorities – Rodríguez was so entranced to meet Chile’s greatest poet that he urged his workers to ensure Neruda escaped. In the film, however, the mill owner glibly announces that it would be more fun to help a communist than the police. Of course, we have only Neruda’s account, which he may well have embellished, but the interesting question is why Larraín preferred his own version to Neruda’s.

Larraín has stated that the way Latin Americans think is shaped by poetry, by metaphor, and that his film is partly concerned with the power of poetry to move and influence. We are shown Neruda’s huge influence, as a communist poet, over his natural constituency: the ordinary working man. (One of the formative experiences in Neruda’s life took place a few years earlier in Santiago’s central market, when the leader of the porters’ union approached him at the end of a poetry recital with a sack around his waist and tears of gratitude in his eyes.) But what we do not see in the film is the immensely moving capacity of poetry to break down barriers between people of diametrically opposed political beliefs.

In the end, what stays with the viewer is the film’s inventive, and often lyrical, playfulness. A significant influence on Larraín was Maurice Pialat’s 1991 movie, Van Gogh: “Pialat used the paintings as a mirror. That’s how I approached Neruda. We used his poetry to create the structure. Nothing is entirely serious. It is more based on poetry than anything else. Neruda’s poetry was a virus that infected us all.”

[Adam Feinstein’s biography, Pablo Neruda: A Passion for Life, was re-issued by Bloomsbury in 2013. Neruda opens this week.]