Many commentators who have affirmed that something called "white rage" gave us Trump appear to treat the phenomenon as if it was a newly sprouted thing. Here is a book that aims to add nuance and historical context to a widely noted, but still too-little examined, aspect of our contemporary political reality. 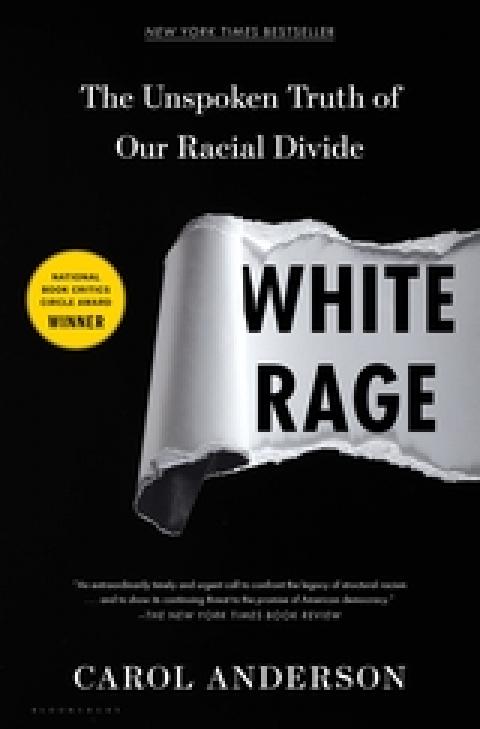 In The Souls of Black Folk (1903), W.E.B Du Bois declared that “the problem of the twentieth century is the problem of the color-line.” Well into the 21st century, the color-line remains an indelible feature of societies with histories of settler colonialism like the United States and South Africa. Carol Anderson’s new book White Rage: The Unspoken Truth of Our Racial Divide shifts the optic to consider how “white rage” has been instrumental in maintaining the color line in the United States since the end of slavery. Anderson unpacks the black advancement/white rage binary and argues strongly and convincingly that the threat of black advancement fuels white rage. By examining specific moments in U.S. history since the abolition of slavery, Anderson unpacks how this binary became the normative organizing principle that continues to determine the relationship between white and black and that has historically undermined the social, political, and economic advancement of African Americans. A historian of African America, this book is representative of Anderson’s interest in the intersections of public policy, race, and social justice in the United States. With this book, Anderson not only provides a framework to understand the persistence of the color-line in the United States but she also offers an analytic to examine the transnational nature of anti-black racism.

The ideas for this book first appeared as a Washington Post op-ed piece titled “Ferguson isn’t about black rage against cops. It’s white rage against progress” (August 29, 2014). According to Anderson, “White rage is not about visible violence … White rage doesn’t have to wear sheets, burn crosses, or take to the streets. Working the halls of power, it can achieve its end far more effectively, far more destructively.” Anderson’s aim in this book, and in her op-ed piece, is to make white rage visible and to “trace its historic movements over the last 150 years.” In the aftermath of Ferguson and Baltimore, the media emphasized the spectacle of black rage against police brutality, rendering invisible the manner in which “the courts, the legislature, and a range of government bureaucracies” have systematically undermined black progress and the “recognition of full citizenship of African Americans” in this country. By tracing the history of “white rage,” Anderson’s analysis disrupts contemporary multicultural and post-racial discourses that place the burden of progress on the individual. These individualist discourses erase the long history of inequality in this country that determines, to this day, the trajectory of the African American community.

White Rage: The Unspoken truth of Our Racial Divide is made up of five chapters: “Reconstructing Reconstruction,” “Derailing the Great Migration,” “Burning Brown to the Ground,” “Rolling Back Civil Rights,” and “How to Unelect a Black President.” By focusing on specific historic moments from Reconstruction and the Great Migration to Brown and including the War on Drugs and the Obama presidency, Anderson demonstrates how black advancement has always been the trigger for white rage. By tracing the history of white rage, Anderson unpacks the manner in which “white rage” has systematically “undermined democracy” and the development and progress of the United States. What becomes clear in Anderson’s analysis is that racism rather than patriotism has always been an organizing principle in the United States, and through the analytic of white rage she shows how, during specific historic moments, national interests were undermined in order to curb black progress. For instance, in chapter 2, “Derailing the Great Migration,” Anderson examines the threat that the migration of African Americans to the North posed for the plantation economy in the South, and she focuses on the numerous methods employed by Southern officials to curb this migration. When their various attempts failed, officials turned to the railroads in order to stop the “physical means” that enabled hundreds of thousand of African Americans to leave. In the midst of World War I, the railway system was essential for “the shipment of personal and material … to support the Allies.” However, Anderson argues that white rage undermined national interests because the priority for white Southern leaders was “their need to stop the advancement of African Americans above all other considerations.”

An important reason African Americans migrated North was the inadequate schooling provided for them in the South. In chapter three, “Burning Brown to the Ground,” Anderson examines the disparities in funding between white and black students and the long-term effects this has had on the U.S. economy and national interests. Because of such disparities in the North and the South, “the U.S. educational system…had deliberately produced a sprawling, uneducated population that would bedevil the nation well into the twenty-first century.” She emphasizes that “the refusal to implement Brown throughout the South even in the face of Sputnik—not only as the law or as simple humanity might have dictated but also as demanded by national interest and patriotism—compromised and undermined American strength.” Education is the cornerstone of any thriving democracy and one of the most important means by which social mobility can be achieved. Since emancipation, African Americans prioritized education, building and funding their own schools throughout the country, and demonstrated their willingness to work in order to proves their citizenship in the country. However, throughout U.S. history African American advancement was met with a “white rage” that was fully backed by the courts, the states, and the federal government.

Throughout the book Anderson points to the role various U.S. presidents have played in undermining black progress since the abolition of slavery and in fueling “white rage.” From Abraham Lincoln’s desire to resettle African Americans in present day Panama and his lack of clarity over the Civil War to the Andrew Johnson era where Johnson reinstalled plantation owners on lands promised to freed blacks, Anderson traces the manner in which successful U.S. presidents systematically undermined the constitution and undercut the freedoms of African Americans. During the period of Reconstruction, Johnson’s lack of response to the violence against African Americans in the South by white Southerners encouraged white rage. Johnson’s ideological position was that the U.S is “a country for white men” and he declared that for as long as he would be president, “it shall be a government for white men.” Anderson links this to the Nixon and Reagan eras. She situates the rise of mass incarceration, the “New Jim Crow,” and the War on Drugs all created by the Nixon administration along this trajectory, emphasizing that every advancement made by African Americans was met with white opposition fueled by white rage. With the election of President Obama, the first black president of the United States, Anderson shows how states undermined African American voters by preventing them from access to the ballot box.

Anderson includes narratives of African American women and men who were directly affected by white resentment against black progress. The inclusion of these vignettes makes visible and real the men and women who fought for their rights as U.S. citizens even in the face of white hostility. Throughout the book Anderson demonstrates that discrimination and violence against African Americans was never just a Southern phenomenon and that Northern whites were equally implicated in undermining the civil rights of African Americans.

Carol Anderson’s White Rage: The Unspoken Truth of Our Racial Divide is a well-written, accessible book that very clearly maps out its argument. This book situates the anti-blackness of the present moment in the United States within a long historical trajectory. Although articulations of white rage have shifted from the spectacular to the subliminal, from overt racism to the era of race-neutral language, the goal of undermining the rights, liberties, and freedoms of African Americans is still effectively achieved. I recommend this book to students and scholars of African American, African Diaspora, and American Studies and those interested in race and racial formations. This book is also important for students and scholars of whiteness studies, particularly those invested in making whiteness visible in order to deconstruct how it continues to operate as an organizing principle in the world. Furthermore, her black advancement/white rage binary offers a framework to examine anti-black racism globally and to situate African American history within a transnational framework, emphasizing the overlaps between slavery, colonialism, and apartheid. The binary also illuminates how white power is consolidated in the era of neoliberal capital, linking Ferguson and Baltimore to the rise of radical student movements and other forms of social activism in South Africa. These student activists are unsettling the logics of white supremacy and white comfort in the post-apartheid period that are easily obscured by the media’s focus on “black rage” that emphasizes the violence perpetrated by mostly black student activists. In the Epilogue Anderson strongly asserts, “it is time to move into the future.” This is only possible by defusing “the power of white rage.”

Jordache A. Ellapen is currently a postdoctoral research fellow in African and African American Studies at Washington University in St. Louis. He completed his Ph.D. in American Studies at Indiana University, Bloomington in 2015. He has MA degrees from New York University (Cinema Studies) and the University of the Witwatersrand in Johannesburg (Dramatic Art). He is the co-editor of We remember differently: Race, Memory, Imagination, a 2012 semi-finalist for the Sunday Times Alan Paton Award, and Mzansi at the Movies: Film Culture in Contemporary South Africa (forthcoming).