The Renaissance of Intellectual Racism

How institutions gift a veneer of respectability to white nationalists who promote racist pseudoscience. 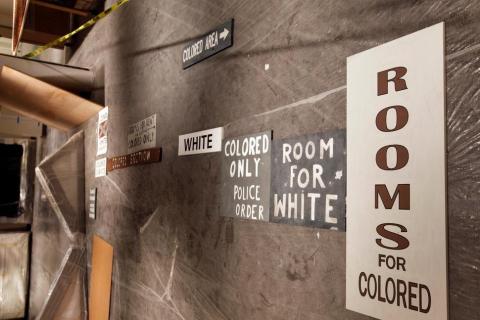 In this Jan. 7, 2010 photo, an exhibit is laid out for installation at the International Civil Rights Center and Museum in Greensboro, N.C. Four college freshmen sat down in a Greensboro, N.C. dime store., AP Photo/Chuck Burton

Intellectual racism, in its cultural and pseudoscientific guises, is having a bit of a renaissance of late. At least, it's receiving more attention than at any time since the debut of "The Bell Curve," the 1994 book by Richard Herrnstein and Charles Murray about race and IQ. Murray himself is back in the news, triggering protests as he tours college campuses. Andrew Sullivan, who published excerpts of Murray's work as editor of The New Republic, recently went out of his way to make a case against the persistence of racism and for black pathology at the end of a much-read piece about Hillary Clinton. Within the last year, white nationalist sites like VDARE, American Renaissance and Radix have become part of the political landscape.

I've written elsewhere about the trap of intellectualized racism, which cuts against the common assumption that racism is rooted in ignorance and provincialism, that it can only be crude and passe. Thus when Richard Spencer, the face of the alt-right, shows up in a natty suit, he is treated as an unusual curiosity. When Charles Murray shows up brandishing a Ph.D. and some regression tables, he is treated as a sober-minded scholar.

But it's not just journalists who make this sort of mistake. Academics do, too. In the February issue of the American Historical Review, one of the history profession's flagship journals, Raymond Wolters reviewed Ansley Erickson's new book, "Making the Unequal Metropolis: School Desegregation and Its Limits." Wolters seemed to have the right credentials to review Erickson's work on desegregation and busing in Nashville: emeritus professor at the University of Delaware, author of several books on race and education.

Oh, and also an active proponent of racist pseudoscience.

The list of white nationalist publications Wolters has written for is extensive: American Renaissance, VDARE, the Occidental Quarterly, Taki's Mag, the National Policy Institute (Richard Spencer's organization). He credits John Derbyshire and Jared Taylor for influencing his transformation to a "race realist" (that is, "racist"). Taylor is the founder and editor of American Renaissance. A taste of his "race realist" analysis of the aftermath of Hurricane Katrina: "Blacks and whites are different. When blacks are left entirely to their own devices, Western civilization – any kind of civilization – disappears." For his part, Derbyshire was booted as a contributor to National Review after publishing "The Talk: Nonblack Version," in which he advised his children not to "act the Good Samaritan to blacks in apparent distress" (but to cultivate an intelligent black friend as "an amulet against potentially career-destroying accusations of prejudice").

Derbyshire and Taylor have provided Wolters with an intellectual framework for his racist analysis, but he had settled on the underlying sentiment much earlier. His most famous work, published in 1984, was "The Burden of Brown: Thirty Years of School Desegregation," which argued that desegregation was a failure and that the legacy Brown v. Board was mostly negative. In the book, he placed the blame for desegregation's failure not on white racism but "the ignorance and uncivilized behavior of many blacks." The book generated a good deal of controversy, though it also garnered some awards.

In 2015, Wolters described how he came to write about busing and to conclude that desegregation was a failure. The story was not one of intellectual discovery, but something much more personal, "a profound sense of grievance." His children had been attending a predominantly white school in Newark, Delaware, and a desegregation order meant that they would soon be going to a school "with sizeable numbers of black students from Wilmington." So they participated in the age-old tradition of white flight, enrolling their children in private schools to evade desegregation. Wolters explained that at the time he stuck mainly to cultural explanations for black inferiority; later he would turn to more biological ones.

This is not someone who should be reviewing books on desegregation for academic journals.

The surprising thing here is not that a college professor would advocate for racist ideas – well-credentialed people can have racist belief systems – but rather that a respected journal would solicit him to write a review. So why did one? When the editor of the AHR, Robert Schneider, apologized for the review, he explained that Wolters had all the markings of a legitimate scholar. He had a university webpage, a "long and solid" list of publications and had published in credible venues.

Indeed, he had. Perhaps even more surprising than the AHR's decision to publish Wolters is that he had been published in other leading journals, including a 2012 review in the Journal of American History of another book on race and education.

So why is Wolters getting so much attention now? Like the outlets he writes for, he is receiving renewed attention because of the rise of Trumpism, which elevated white nationalist groups like the alt-right to political prominence.

But there are some bigger lessons to draw here. First, we need to pay more attention to the institutions, organizations and publications that provide a veneer of respectability to people who promote racist pseudoscience and hold them accountable for that role. Second, at a time when universities are constantly portrayed as hotbeds of intolerant liberalism, especially in humanities and social science departments, people like Wolters remind us that such a view is ultimately a caricature, that universities often tolerate ideas that are not only deeply offensive but factually untrue.

Wolters also serves as another reminder that racism is about power, not ignorance. It is infinitely adaptable. It comes in fitted suits as well as flowing sheets, in well-appointed faculty lounges as well as smoke-filled dive bars. And just because more people are now paying attention to the extent of its influence and the perniciousness of its power doesn't mean that intellectual racism is something new. It just means that more people are starting to notice and to combat it.

[Moderator: For more on this subject by this author see this article in Vox]

Nicole Hemmer is a U.S. News contributing editor for opinion and author of "Messengers of the Right." She is an assistant professor at the Miller Center of Public Affairs and a research associate at the US Studies Centre at the University of Sydney. She is also host of the Past Present podcast. Follow her on Twitter: @pastpunditry