film An Uneven Tribute to The Immortal Life of Henrietta Lacks

In HBO's film The Immortal Life of Henrietta Lacks, you learn about the miraculous clump of cells that changed medical science forever before really learning about the person who made and was killed by them. In 1951, a 31-year-old African American woman named Henrietta Lacks learned she was dying of cervical cancer. She sought treatment from a then-segregated Johns Hopkins Medical Center where a piece of her tumor was removed without her knowledge for ongoing research. 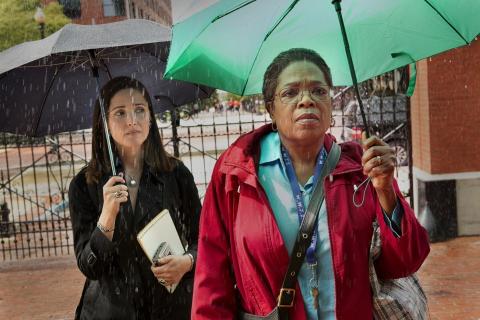 The doctors at John Hopkins Medical Center found that Henrietta Lacks’s cells could do something they’d never seen before: they could survive and reproduce in a laboratory indefinitely. A piece of her tumor was removed without her knowledge and this immortal cell line, dubbed “HeLa” (for Henrietta Lacks), allowed scientists to carry out experiments they couldn’t perform on a living person, effectively leading to the birth of the biomedical industry.

The story of Lacks, her cells, and her family came to mainstream recognition when the writer Rebecca Skloot published her runaway bestseller The Immortal Life of Henrietta Lacks in 2010. The book documents Skloot’s efforts to track down Lacks’s family to learn more about the woman herself, whose identity had been obscured for decades while companies profited off her cells. Now, the HBO film adaptation, directed by George C. Wolfe and starring Oprah Winfrey, aims to bring that story to an even wider audience by focusing on the more personal, and less scientific, elements of Skloot’s book.

But at just 92 minutes in length, Wolfe’s movie is at one immediately obvious disadvantage. Regardless of how familiar the viewer is with Lacks—and the complex intersection of family history, race, and medical ethics her story embodies—it feels as though plenty of important context has been left out or given too little space. Take the first four minutes, when the film tries to condense 60 years of history into a breezy montage of old-timey reenactments, photographs, newspaper clippings, and animated timelines. It makes sense, of course, to start with a quick overview and fill in more details later. But The Immortal Life of Henrietta Lacksdoesn’t make the wisest use of its time in the occasionally meandering narrative that follows, a shame given the enormity of the life it aims to unpack.

Rose Byrne plays Skloot, a young, white journalist from Portland trying to get in touch with Lacks’s children and siblings 40 years after her death for a book she wants to write about Henrietta’s life. Skloot seems aware of her fraught position as an outsider—there are unavoidable white-savior overtones to her mission of telling Lacks’s story to the world, a fact the film doesn’t shy away from (Skloot herself is a co-executive producer on the project). Eventually, Skloot gets a hold of Lacks’s daughter Deborah, played by Winfrey, and their complicated relationship goes on to form the narrative backbone of the film.

Not wanting to make Skloot the protagonist of the movie, Wolfe shifts much of his attention to Deborah, who’s in her 50s and saddled with a host of ailments, both physical and emotional. Only a few years old when her mother died, Deborah endured poverty and abuse for much of her young life. As an adult, she learned that her mother’s cells were donated without her consent, which led her family to seek restitution and compensation for Henrietta’s donation—to no avail. After years of being taken advantage of and condescended to by con artists and doctors (who were conducting blood tests on Henrietta’s descendants to further their research), Deborah has little trust or good will left for strangers interested in her mother.

To its credit, the film emphasizes how institutional racism shaped the careless and often demeaning treatment Lacks and her children received, and how it served the interests of powerful and wealthy institutions.

After so much disappointment, Skloot arrives, professing honest motives. She wants to shade in the humanity of a woman whose contribution helped countless lives—and whose experience fits with America’s legacy of exploiting black bodies with impunity. Eventually, Deborah’s (understandable) suspicion is outweighed by her desire to finally answer some of the small-seeming questions she’s had about her mother for years: Did she breastfeed me? Did she like to dance? And then the more troubling questions: Can she feel pain when scientists prod at her cells? Are there clones of her walking around somewhere? (The film indicates that researchers had never bothered to address these issues with the Lackses because of racist assumptions about their intellect.)

In the film’s climactic sequence, set during a storm, Winfrey is both thunder and lightning.

Winfrey’s performance as Deborah gives The Immortal Life of Henrietta Lacks its one bit of genuine brilliance. After cautiously agreeing to help Skloot, Deborah swings wildly between unquenchable excitement for the project, distrust toward the writer and her motives, grief about her mother’s death, and confusion about Henrietta’s supposedly “immortal life” that seems to be benefiting everyone but the people she left behind. Winfrey manages these hairpin turns of emotion with grace and fury. She perfectly navigates the physicality of the role, whether shuffling along determinedly with her cane, barking at Skloot, or welling up at a new memory of her mother. In the film’s devastating climactic sequence, set during a storm, Winfrey is both thunder and lightning, blinding and shaking viewers to their core.

Beyond Winfrey, The Immortal Life of Henrietta Lacks has the markings of a standard TV movie, though there’s a clear mismatch between form and content. (There’s no easy beginning-middle-end arc here, so it’s odd when the film tries to loosely impose one.) Deborah and Skloot’s journey—tracking down family members, lost documents, and scientists—follows a slightly muddled chronology that zips through major developments while lingering on smaller interactions. The writing often lands with a thud, as when Deborah and Skloot have an awkwardly brief parting conversation that takes place through an open car window (“I’m thinking of going back to school, getting certified to become a nurse’s aid.” “That’s fantastic!”). But the rest of the capable cast, which includes Courtney B. Vance, John Beasley, Reg E. Cathey, do their best with what they’re given.

To its credit, the film emphasizes how institutional racism shaped the careless and often demeaning treatment Lacks and her children received, and how it served the interests of powerful and wealthy institutions. Abundant flashbacks of Lacks as a young mother (Renée Elise Goldsberry), though at times maudlin, are moving because of what these memories mean for Deborah. For those seeking a good primer of Lacks’s story, there are more concise options, and the HBO film is far from a suitable substitute for reading Skloot’s book. (While two of Lacks’s sons were consultants on the film, other family members have been steadfastly opposed to it.) But for those interested in Deborah, and her hunger to know more about the famous mother she never knew, Winfrey’s humane and riveting performance may make this adaptation worth a watch.

The Immortal Life of Henrietta Lacks is currently being screened on HBO.

[Lenika Cruz is an associate editor at The Atlantic, where she covers culture.]