The advantages for Republicans to weaken labor are obvious. Not only are they disarming a political adversary, but they are helping their business donor base in a state that already has some of the stingiest unemployment benefits for laid-off workers, one of the lowest minimum wages, and so forth. 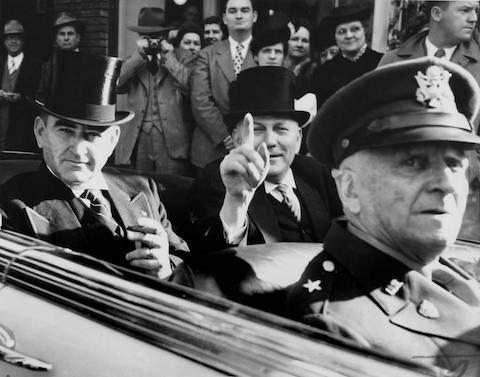 The last major effort to repeal North Carolina’s anti-union right-to-work law occurred in 1949, so you can see the urgency of the legislature in moving this year to enshrine the law in the state Constitution. Can’t be too careful, you know.

The constitutional amendment has passed the House and is now in the Senate.

Gov. Kerr Scott (1949-53) was the first and only North Carolina governor to call for repeal of the state’s right-to-work law, calling it “harsh.” The state passed the law in 1947 shortly after Congress had enacted the Taft-Hartley Act over President Harry Truman’s veto, allowing states to outlaw employers from requiring new employees to join a union or pay a fee.

Scott came by his pro-union sentiment by experience.

In 1930, the Pet Milk Company of St. Louis purchased the Alamance Cooperative Creamery and its dairy plant in Greensboro, which had been buying its milk from the area farmers under the banner of the Guilford County Milk Producers Association.

Pet said it was cutting prices paid to farmers, and henceforth would only deal with farmers individually, not collectively as a group. When the farmers met with Pet’s man, he came armed and treated them to “four and half hours of abusive reprimand,” according to Scott.

The farmers poured their milk into the streets, and about 50 of them formed the Guilford Dairy, a cooperative that allowed the farmers to sell directly to consumers. Among them was Scott, an Alamance County dairy farmer, who never forgot how the big corporation treated the farmers.

In 1949, Scott was at the height of his popularity as the most pro-labor North Carolina governor of the past century. But he couldn’t get much traction for repealing the right-to-work law. Scott was a Democrat and the legislature was Democratic, but was fairly hostile to Scott.

The measure was killed on the House floor by a 59-17 vote with lawmakers complaining that labor had been unpatriotic by striking during World War II.

In 1951, the legislature killed a Scott-backed plan to implement the state’s first minimum wage (75 cents per hour) and a 40-hour week before overtime kicks in. It was killed in committee with opponents crying “socialism” and “welfare statism.”

This should come as little surprise. North Carolina has long been one of the least unionized states in the country – and it has long been state policy to oppose labor unions going back to at least the 1920s when the National Guard was sent in to break strikes.

North Carolina’s work force was 3 percent unionized in 2016, the second lowest in the country after South Carolina, according to the U.S. Bureau of Labor Statistics.

So why the push now?

Rep. Justin Burr, a bail bondsman from Albemarle and the bill’s chief sponsor, said labor unions have a “strong desire to repeal our current statutes and ultimately want to unionize North Carolina as part of a southern strategy.”

Burr neglected to mention to the House that the last serious effort to repeal North Carolina’s right-to-work law occurred about 35 years before he was born.

The state AFL-CIO believes this is a Republican Party effort to put a constitutional amendment on the ballot in the midterm 2018 elections that will appeal to the conservative base.

The more likely explanation is that this is part of a national effort since the Republican sweep of state legislatures in 2010 to weaken the already greatly diminished power of labor unions across the country.

With the backing of groups such the U.S. Chamber of Commerce, Americans for Prosperity and the American Legislative Exchange Council, Republican legislatures have in recent years passed right-to-work laws in previously pro-labor states such as Michigan, Wisconsin, Missouri and West Virginia.

There has also been a move to double down in states that already have right-to work laws, as in North Carolina, by passing constitutional amendments.

The advantages for Republicans to weaken labor are obvious. Not only are they disarming a political adversary, but they are helping their business donor base in a state that already has some of the stingiest unemployment benefits for laid-off workers, one of the lowest minimum wages, and so forth.

Union bashing, cheap labor and cheap land has been an integral part of North Carolina and the South’s economic development effort for generations. Maybe it even works.