Kris Kobach is the GOP mastermind behind a secretive system that purged 1.1 million Americans from the voter rolls. 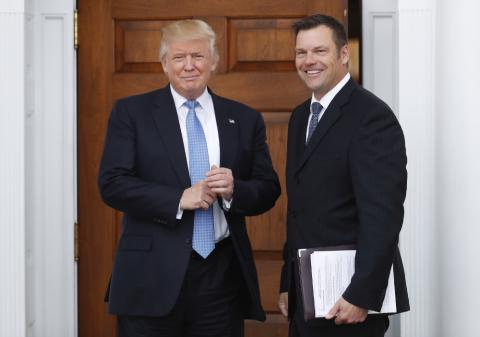 Kris Kobach was spooning down vanilla ice cream when I showed him the thick pages of evidence documenting his detailed plan to rig the presidential election of 2016. The Kansas secretary of state, sucking up carbs at a Republican Party fundraiser, recognized the documents and ran for it while still trying to wolf down the last spoonful.

That was 2015 (yes, the ballot heist started way back). Today this same man, Kris Kobach, is Donald Trump’s choice to head the new “Voter Integrity Commission.”

It’s like appointing Al Capone to investigate the mob.

How did Kobach mess with the 2016 vote? Let me count the ways—as I have over the past three years of hunting down Kobach’s ballot-box gaming. Just two of Kobach’s vote-bending tricks undoubtedly won Michigan for Trump and contributed to his “wins” in Ohio, North Carolina and Arizona.

Kobach is the GOP mastermind behind this secretive system, which purged 1.1 million Americans from the voter rolls.

When Trump said, “This election’s rigged,” the press ignored the second part of his statement: “People are voting many, many times.”  Trump cited three million votes illegally cast.

The White House said Trump got this information from Kobach. Indeed, it specifically comes from a list of 7 million names—or as Kobach describes it, a list of 3.5 million “potential double voters.”

How did Kobach find these three million double voters? He matched their names, first and last. That’s it.

Here’s an unedited screenshot of a segment of his list:

James Edward Harris Jr. of Richmond, Virginia, is supposed to be the same voter as James R. Harris (no Jr.) of Indianapolis, Indiana. Really? Note that not one middle name matches.

And here’s the ugly part. Both James Harrises (in fact, hundreds of them) are subject to getting scrubbed off the voter rolls.

These are Kobach’s lists, tens of thousands of names I showed Kobach, falsely accused of the crime of double voting.

That’s why Kobach was stunned and almost dropped his vanilla, because he and his GOP colleagues kept the lists of the accused strictly confidential. (The first of the confidential lists was obtained by our investigative photojournalist, Zach D. Roberts, through legal methods—though howling voting officials want them back.)

In all, about 1.1 million voters on that list have been scrubbed already—and they don’t know it. They show up to vote and their names have simply vanished. Or the voter is marked “inactive.”  “Crosscheck” is not marked on the victim voter’s record. It’s a stealth hit.

And it’s deadly. Doubtless, Crosscheck delivered Michigan to Trump who supposedly “won” the state by 10,700 votes. The secretary of state’s office proudly told me that they were “very aggressive” in removing listed voters before the 2016 election. Kobach, who created the lists for his fellow GOP officials, tagged a whopping 417,147 in Michigan as potential double voters.

And not just any voters. Mark Swedlund, a database expert who advises companies such as Amazon and eBay on how not to mis-match customers, was “flabbergasted” to discover in his team’s technical analysis that the list was so racially biased that fully one in six registered African Americans were tagged in the Crosscheck states that include the swing states of Michigan, Ohio, North Carolina, Arizona and more.

The effect goes way beyond the Trump v. Clinton count. I spoke to several of the targeted voters on the list in Georgia’s Sixth Congressional district where the Democratic candidate fell just short of the margin to win a special election. Especially hard hit in the northern Atlanta suburbs were Korean-Americans like Sung Park, who found he was tagged as voting in two states in 2012 simply because he had a name that is as common in Korea as James Brown.

Kobach, in fact, had tagged 288 men in Georgia named James Brown on his Crosscheck blacklist.

As Crosscheck spreads—and it was just signed into law in New Hampshire in the last days of a lame-duck Republican governorship—it will undoubtedly poison the count in the fight for Congress in 2018.

That’s why Trump needs Kobach on his "Presidential Advisory Commission on Election Integrity": To spread Crosscheck with an official federal endorsement, and likely, congressional legislation.

If Crosscheck isn’t enough to scare you, Kobach is also pushing Trump to require voters to prove their citizenship.

At first blush, it seems right to demand people prove they are U.S. citizens to vote. But here’s the rub: We are not Red China and don’t carry citizenship cards. Resident aliens holding green cards have—indeed, are required to have—Social Security cards and drivers’ licenses, if they drive or work.

The readiest proof of citizenship is a passport. And what is the color of the typical passport holder, his income and the color of his vote?

The other form of proof, besides naturalization papers, is one's original birth certificate.

And there’s the rub: the poor, minorities and especially new young voters do not have easy access to passports or birth certificates. Kobach took his citizenship proof requirement out for a test drive in Kansas. The result: 36,000 young voters were barred from voting… that is, until a federal judge, citing the National Voter Registration Act, told Kobach that unless he could produce even one alien among those 36,000, she was ordering him to let them vote.

Kobach’s response: a private meeting with Trump at Trump Tower where he proposed changing the Act.

All of this to eliminate a crime that does not occur. Besides Trump’s claims of alien voters swimming the Rio Grande to vote for Hillary, I have found only two verified cases of votes cast by aliens in the U.S. in the last decade. (One was an Austrian who confessed to voting for Jeb Bush in Florida.)

Don’t laugh. The threat of “alien voters”—long a staple claim by Kobach on his appearances on Fox TV—will be the Kobach Commission’s hammer to smash the National Voter Registration Act’s protections. Based on the numbers from Kansas, and its overwhelming effect on young (read: Democratic) voters, this shift alone could swing the election of 2018.

With Kobach’s Crosscheck con together with his “alien” voter attack, the choice of the electorate in 2020 may already be trumped.

Greg Palast, a Puffin Foundation fellow in investigative reporting, is the author of the New York Times bestseller, The Best Democracy Money Can Buy, now a major motion picture.