With Donald Trump and his ‘America first’ rhetoric, these groups are seeing a dramatic surge. It’s up to us to stop them

May 19, 2017 Douglas Williams The Guardian
Printer friendly
This Is What Emboldened White Supremacists Look Like Published May 19, 2017 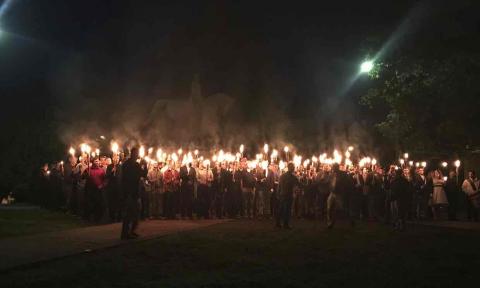 ‘This was no black-and-white newsreel, relaying the horrors of a time long since past.’, Allison Wrabel/AP

It was a scene out of the darkest days of the civil rights movement. A couple of dozen white supremacists rallied around a statue of Robert E Lee, a Confederate army general, in Virginia, carrying torches and chanting: “You will not replace us.”

But this was no black-and-white newsreel, relaying the horrors of a time long since past. This grotesque scene played out on Saturday, at a rally headlined by the white supremacist Richard Spencer.

White nationalist Richard Spencer at rally over Confederate statue's removal
Read more
The cause for this neo-Klan rally? The city of Charlottesville’s decision in February to remove the Lee statue from the park that bears his name in the city’s downtown area. The white supremacists also demonstrated at the city’s Festival of Cultures earlier in the day.

Perhaps it is no surprise that, in a state that hosted the capital of the Confederacy for the vast majority of the civil war, decisions around squaring grand monuments to the defenders of slavery with social progress have always been cause for tension.

When the city of Richmond decided in 1995 to place a statue of the black tennis star and city native Arthur Ashe on Monument Avenue – named as such because it is home to several statues of Confederate soldiers – the decision was greeted by a furor.

And when a huge tapestry on Richmond’s flood wall along the James river ran into controversy four years later due to an image of Robert E Lee in full military regalia, the former Klan leader David Duke gave a press conference in front of the Ashe statue condemning the decision to replace the photo with one of Lee in civilian clothes.

But the context for our current-day battles is much different. And much more dangerous.

When David Duke came to Richmond, there were more cameras than supporters. His presence was openly mocked in the city, including by the city’s mayor, a young, boyish-looking man by the name of Tim Kaine. When asked to reply to Duke’s presence in the city, Kaine stated:

“You can take Duke out of the Ku Klux Klan, but you can’t take the kook out of David Duke.”

Duke and his ilk were isolated then, limited to a few splinter Klan groups and “history organizations” such as the Sons of Confederate Veterans and the Daughters of the Confederacy.

They are not isolated anymore.

With Donald Trump and his “America first” rhetoric now dominating the airwaves, we are seeing a dramatic surge in white supremacist and fascist groups. These groups are not merely concerned with fashioning a history of the United States where they are the victors: Spencer and his followers are looking to remake our society to fit their vile and oppressive vision.

A vision where black deaths at the hands of the state are met with shrugs at best, but more likely with laurels and commemoration. A vision where, despite the rhetoric of racial separatism and “homelands” for each race, people of color would be lashed into servitude to a rich white power elite. A vision where the labor movement – that magnificent engine that builds equality through solidarity and shared struggle in places like Winston-Salem, North Carolina and Bogalusa, Louisiana – is destroyed utterly.

The left has a history of breaking such contemptible political currents, and it is that history that we must tap into and learn from today. As the battle of Cable Street proved in 1936, and the civil rights movement proved again and again across the south in the 1960s, the only way to defeat fascists and white supremacists is to meet them head-on in confrontation, with strong working-class social movements in the streets.

Building such movements will require more than disorganized street brawling; this will take strategy, planning, and (most importantly) solidarity and trust among neighbors and organizers.

The existence of such far-right and racist sentiment and organization is neither an inevitability nor a novelty. Virginia – and the rest of the United States – has seen fascist trash marching with torches at night for well over a century.

It is up to us to make sure that this is the last iteration of would-be Klansmen to do so.

Douglas Williams is a PhD student in political science at Wayne State University, researching the labor movement and labor policy. He blogs at The South Lawn.