The attack in Manchester was likely by Sunni radicals (ISIL has claimed it), and came two days after President Trump blamed all terrorism on Shiite Iran at a speech in Saudi Arabia, the proponent of a form of extreme Sunni supremacism. In 1996, Manchester had also been victimized by a bomb at a civillian center; in that instance left by the Provisional IRA. The question is: can anything be learned from looking at 1996 and 2017 in the same historical frame? 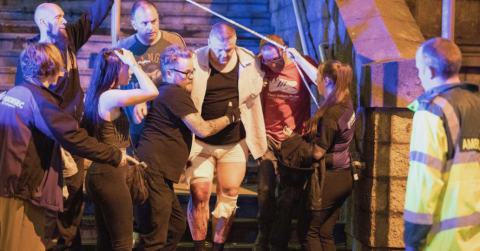 An injured concert goer is taken out of Manchester Arena on Monday night., Joel Goodman/LNP

Manchester, UK, was hit with the deadliest bomb attack on Monday since a June Saturday morning in 1996, when a massive 3000 lb. Provisional Irish Republican Army blast leveled the city center shopping district to rubble and left 200 wounded. The toll at the Ariana Grande concert so far this morning is nearly two dozen dead and over 60 wounded.

My heart goes out to the innocent victims, young people celebrating spring and life with some lighthearted entertainment. I apologize that the rest of this column will turn to dry analysis. Trying to understand global contemporary history is my own way of dealing with its tragedy.

It should be underlined that local Manchester Muslims were as devastated as everyone else by this attack, and that Muslim cabbies swung into action helping the concert-goers with free rides out of the affected area. Islamic law forbids terrorism.

Ironically, the attack yesterday in Manchester was likely by Sunni radicals (ISIL has claimed it), and came two days after President Trump blamed all terrorism on Shiite Iran at a speech in Saudi Arabia, the proponent of a form of extreme Sunni supremacism. Saudi Arabia’s royal family say they oppose terrorism and they are not responsible for terrorism, but they do give Wahhabis the impression that non-Wahhabis are wretched heretics with whom one cannot be friends.

Can anything be learned from looking at 1996 and 2017 in the same historical frame? Paul Sanders wrote in the London Times in 1996,

“We heard the sirens through the office window and I ran into the street to be met by hordes of shoppers running from the city centre . . . I had no idea what was going on but I headed forwhere they were running from. . . A policeman shouted at me: “Get down!” and thatwas when the bomb went off. It seemed to happen in slow motion. The airwas sucked out ofmy lungs and I was blown off my feet. Glass and bits of slate were falling around me and I was frightened of getting knocked unconscious or worse. I somehow got to thewall of a pub for shelter. As I looked along the street, I saw the cloud of dust and smoke. I took several frames.

Local officials spoke of the event as “a chilling reminder of the IRA’s capacity for evil,” [quoted in Barry Hazley, “Re/Negotiating ‘Suspicion’: Exploring the Construction of the Self in Irish Migrants’ Memories of the 1996 Manchester Bomb,” Irish Studies Review Vol. 21, Issue 3. Date: 2013 Pages: 326-341). Some suspicion fell on Manchester’s large Irish expatriate community. There was a search for persons with Irish accents. The Irish community center received threatening phone calls with that “you murdering Irish bastards” are going to get it tonight!”

As Hazley’s oral history showed, most working-class Irish in Manchester had no sympathy with the bombing, and regretted the tension it introduced into their relations with English friends.

Let me underline, since these matters are still controversial and can make for hard feelings that a) terrorism, i.e. hitting innocent civilians, is always wrong and b) the Irish nationalist cause has many legitimate grievances stemming from the long history of brutal colonialism.

The Provisional Irish Republican Army, founded in 1969, sought to unite the Republic of Ireland with British Northern Ireland in a single state. In the IRA frame, Northern Ireland was a colonial holdover militarily occupied by the United Kingdom and could be liberated by guerrilla war on Britain. Ireland itself had been a British colony for centuries and was only liberated by hard anti-colonial struggle at the beginning of the twentieth century. At the time of the 1996 bombing in Manchester, negotiations were going on between the UK and Ireland to find some sort of power-sharing solution for Northern Ireland. Those negotiations succeeded in 1998, and by 1997 the IRA had declared a cease-fire. The Manchester bombing was one of the last big such attacks. Perhaps because it occurred in the midst of a serious diplomatic process, British officialdom responded in a relatively subdued manner.

The 1998 “Good Friday” agreement that largely ended the Northern Ireland “troubles” that roiled the 1970s and after and left thousands dead and wounded acknowledged Ireland’s legitimate interests in Northern Ireland but left that province part of the United Kingdom until such time as a majority of its inhabitants wished to succeed (a right they were granted). It also recognized the right of pro-Ireland inhabitants of Northern Ireland to advocate for union with Ireland without that being seen as treason.

How does the 1996 P-IRA bombing compare to that of 2017? Both hit a civilian target (Arndale Shopping Center among others in the first instance, a pop music concert in the second). If it is true that yesterday’s incident was an attack by a suicide bomber, it very possibly was the work of ISIL (ISIS, Daesh), the radical Muslim organization that seeks to detach Sunni Iraq and Sunni Syria from their respective countries and create a state for Sunni Arabs, who are currently ruled by what the Sunni nationalists see as Shiite-dominated states. Britain was the colonial power that formed modern Iraq and is currently part of a US-led military coalition bombing ISIL facilities in an attempt to defeat the organization.

Beyond ISIL, Western Europe had colonized most of the Muslim world for centuries, in a concerted quest to steal its resources, tax its people, and put its inhabitants to work on colonial plantations. After WW II, most Muslim-majority states with the exception of the Mandate of Palestine became independent countries, but even then they often continued to be economically colonized and politically subordinate to the old colonial master. The US war of aggression on and brutal military occupation of Iraq 2003-2011 set off this sort of anti-colonial struggle once again.

ISIL of course differs profoundly from the IRA, but both were reactions against a history of colonial shaping of the lives of local people in ways that were seen by the colonized to harm their dignity and to detract from local sovereignty. Both lashed out with terrorism (the IRA once hit Harrod’s Department Store in London, leaving people dead).

One big difference is that the IRA had a clear idea of what it wanted, which was the union of Northern Ireland with the Republic of Ireland (something a majority of people in Northern Ireland, i.e. Protestants, however, did not want). The IRA subordinated religion to nation, coding everyone in the Irish isles as Irish and ideally part of the same polity.

In contrast, ISIL exalts sectarian identity over nation, seeing the Sunni Arabs of Iraq as oppressed by being in the same country with a majority Shiite population. ISIL is a form of hyper Sunni nationalism (though to be fair it codes many mainstream Sunnis as heretics or colonial collaborators).

Both the IRA and ISIL are unrealistic. The IRA got only a little of what it wanted, but apparently that was enough to convince its members to stand down (there is a tiny rump of “Real IRA” activists who reject the Good Friday agreement). ISIL in contrast will get nothing and will simply be militarily defeated.

To the extent, though, that ISIL is a (distorted and monstrous) form of Sunni Arab nationalism, or benefited from those sentiments, it will be a mistake for Iraq/ US and Syria/Russia to simply crush the Sunnis. Sunni Arabs in both countries have legitimate aspirations to having more say in their governance. Along with the military defeat of ISIL, which may be accomplished by the end of the year, a George Mitchell-style political settlement is desirable. In Iraq, some of the problem could be resolved by the country becoming more democratic, making its parliamentary system more inclusive and less of a tyranny of the majority. Unfortunately, we are in the age of Trump, an age of the exaltation of the strong man (i.e. dictator) and diplomatic solutions are seen as mere weakness.

Juan Cole teaches Middle Eastern and South Asian history at the University of Michigan. His new book, The New Arabs: How the Millennial Generation Is Changing the Middle East (Simon and Schuster), will officially be published July 1st. He is also the author of Engaging the Muslim World and Napoleon's Egypt: Invading the Middle East (both Palgrave Macmillan).
Subscribe to Portside