A new infrastructure proposal, a 21st Century New Deal For Jobs, boldly invest $2 trillion to fix our nation's crumbling infrastructure, create millions of jobs, reduce inequality, and clean up our environment, was introduced in Congress today by the Congressional Progressive Caucus (CPC). The CPC is the largest caucus within the House Democratic Caucus, with over 70 members standing up for progressive ideals in Washington and throughout the country.

., Congressional Progressive Caucus
Congressional Progressive Caucus Co-Chairs Rep. Raúl M. Grijalva (D-AZ) and Rep. Mark Pocan (D-WI), Rep. Keith Ellison (D-MN), Rep. Ted Lieu (D-CA), Rep. Barbara Lee (D-CA), Rep. Pramila Jayapal (D-WA), Rep. Jared Huffman (D-CA), Rep. Ro Khanna (D-CA), Rep. Jared Polis (D-CO), Rep. Wm. Lacy Clay (D-MO), Rep. Rick Nolan (D-MN), and Rep. Carol Shea-Porter (D-NH) made the following statements today after they unveiled a House Resolution outlining 10 principles that should be included in any infrastructure plan considered by Congress.  They also unveiled the CPC's bold infrastructure proposal, entitled a 21st Century New Deal for Jobs.
"America's infrastructure is desperately in need of repair - this year, the American Society of Civil Engineers estimated $4.6 trillion in infrastructure needs, of which more than $2 trillion did not have estimated funding," said Rep. Lieu. "The American people deserve to have a serious conversation about how to address these needs. To fund infrastructure projects, President Trump's relatively small and incoherent plan would use irresponsible tax gimmicks that benefit Wall Street at the expense of taxpayers. My colleagues and I know that Americans cannot afford to settle for this scam. Instead, we have introduced the 21st Century New Deal for Jobs to ensure that Congress boldly addresses our infrastructure needs and supports a plan that creates millions of jobs without sacrificing protections for workers and the environment."
"Democrats are leading the way for millions of jobs. Donald Trump wants to sell off our roads to foreign governments and give taxpayer dollars to Wall Street billionaires, and he calls that job creation?" Rep. Pocan said. "Maybe that will create jobs in countries like Russia, but not for hard-working Americans. Democrats are determined to take this fight to the people. Our country is in dire need of a bold vision to repair our crumbling roads and bridges, clean our air and water, restore our children's unsafe school buildings, and connect our communities to each other with high-speed rail and internet. While President Trump and the Republicans are busy concocting a trillion-dollar Wall Street giveaway under the guise of infrastructure, Democrats believe big corporations should pay their fair share to support dignified employment and build a more sustainable and vibrant economy for everyone." 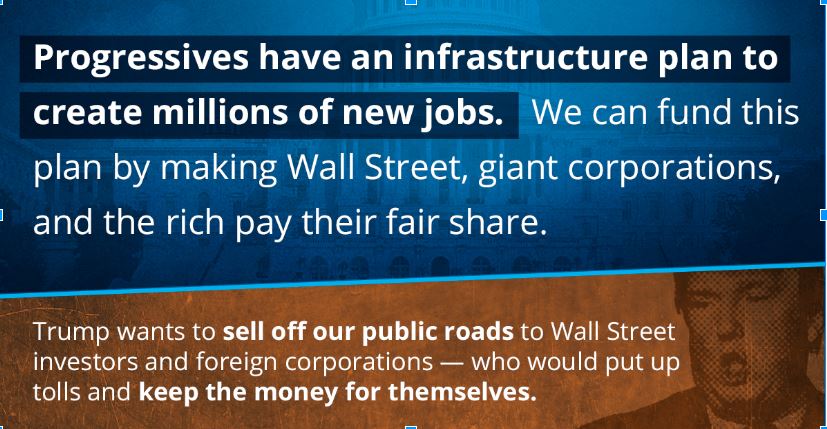 "The Congressional Progressive Caucus' 21st Century New Deal for Jobs is the only comprehensive infrastructure plan that places workers before corporate interest," Rep. Grijalva said. "It provides significant investments to address the current needs of our country, such as modernizing our outdated schools and replacing our lead-ridden pipelines that have destroyed the public health of children in Flint. The plan creates millions of forward-thinking jobs and ensures nobody is forced to compromise their living standards or working conditions. It sets fundamental principles of social, racial, and environmental justice so our infrastructure planning workforce reflects the needs of our diverse communities. More importantly, it commits public money for the public good. I am proud to support the 21st Century New Deal for Jobs plan to meet the real economic and infrastructure needs of our country."
"Rebuilding our nation's infrastructure is about so much more than construction projects," Rep. Ellison said.  "It's about replacing the pipes in Flint that poisoned an entire community, making our roads and bridges safer, and rebuilding crumbling schools. As Democrats, we believe we must improve the lives of millions of hardworking families, putting millions of Americans to work at good jobs, and make our tax system fairer by making the wealthiest pay their fair share. The Republican infrastructure plan is nothing more than another tax break for millionaires and billionaires."
"We need to invest in our infrastructure so that communities - especially communities of color - are empowered for a 21st century economy," Rep. Lee said. "The CPC infrastructure plan lays out bold, long overdue investments into the American people. Our plan puts people to work rebuilding our crumbling roads and bridges, expanding the green economy, and bringing broadband to communities across the country."
"Donald Trump's cruel budget eliminates billions in funds that invest in our transportation, air quality and safety. In stark contrast to Trump's misguided values, we at the Congressional Progressive Caucus have prioritized infrastructure to ensure success for our communities. The 21st Century New Deal for Jobs plan will modernize and prepare workers for our changing economy," said Rep. Jayapal. "Day in and day out, our children, families and communities rely on safe school buildings, up-to-date transportation, secure roads and bridges and a steady paycheck. By upgrading our infrastructure, creating jobs and training workers for careers in clean energy, water and transportation, this New Deal will help our nation thrive."
"Too many communities, especially in rural America, are being left behind because of crumbling infrastructure," said Rep. Huffman. "We shouldn't be satisfied by the status quo. In my district alone, we ought to be overhauling roads that are literally falling into the ocean, repairing schools closed due to mold infestation, and connecting the communities that are isolated for lack of high quality broadband. The 21st Century New Deal for Jobs plan will ensure that our country has the infrastructure to compete in the global economy, enable children - and all Americans - to thrive, while also taking smart steps to rebuild our communities."
"Expanding vital internet service supports the progressive vision of 21stCentury America," Rep. Khanna said. "The CPC's plan will expand economic opportunity by bringing high-speed Internet access to all Americans -- including new access for rural communities and incentives to increase adoption in low-income communities. By doing so, we will help create millions of new jobs and start-ups in rural America, in tribal areas, and in urban centers that have yet to see the gains of the technology revolution."
"Now is the time for a direct and bold federal investment in jobs and infrastructure, addressing everything from roads and bridges to broadband, public rail, to our crumbling schools, and energy grid," Rep. Polis said. "We need an infrastructure plan that doesn't aim to provide giveaways to special interests, but helps all Americans and creates millions of jobs across our country. In my district we have to address problem-areas that range from I-25 between Denver and Fort Collins, I-70 which has millions of people traveling to and from the mountains, or the North West line commuter rail that is 35 years behind schedule. A wise infrastructure plan will alleviate traffic, invest in our schools, increase energy efficiency, encourage commerce, and create millions of good-paying jobs."
"The principles in this resolution will not only rebuild our crumbling roads, bridges, ports, airports, schools, water systems and other vital infrastructure projects," said Rep. Lacy Clay. "They will also lift up hard-working families in St. Louis and across the nation. The long-overdue investment that we make in public infrastructure will generate millions of good American jobs and it pay huge dividends for many generations to come. I'm proud to cosponsor this important set of principles that will move our nation forward."
"America's infrastructure is the cornerstone of our national security and the key to job creation, business development, comfortable lives and quality communities," Rep. Nolan said. "When we invest in our roads, bridges, airports, waterways, ports, pipelines, rail lines and broadband systems, we invest in ourselves and pay prosperity forward to future generations. So we can't be shortsighted. We need to think big, plan ahead, and make rebuilding our infrastructure the priority it needs to be."
Too much of our infrastructure is in fair or critical condition, even though there are hard-working people across New Hampshire and our nation ready to do the job," Rep. Shea-Porter said. "It's time for Congress to work together on a comprehensive infrastructure plan that follows these basic principles to address our urgent needs, invest in our future, and create good jobs."
21st Century New Deal for Jobs 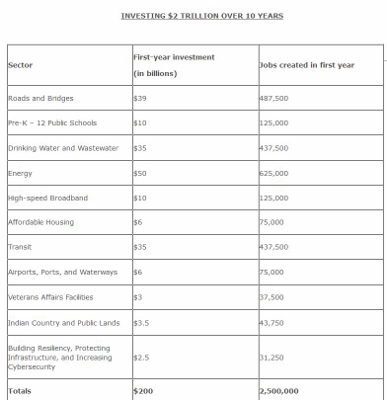