A Mississippi legislator called for lynchings on the same day that a black student was stabbed on campus. We are facing a crisis of racism. 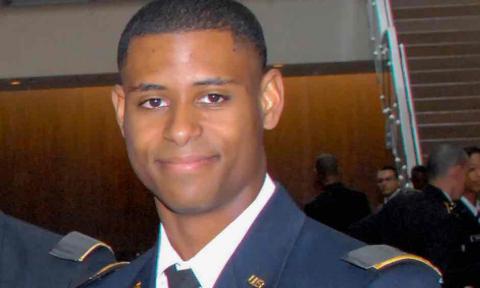 Richard Collins III, was stabbed and killed on the campus of the University of Maryland. `A lynching is a spectacular murder that serves as a warning to a whole group.', Photograph: Reuters // The Guardian
Lynching is back in America's headlines. On Saturday, an African American student, Richard Collins III, was stabbed and killed on the campus of the University of Maryland in what was widely - and rightly - called a lynching. That same day, the Mississippi state representative Karl Oliver wrote on Facebook that people who supported the removal of Confederate memorials "should be LYNCHED".
Both cases are grotesque, obscene, and very reflective of our present racist crisis embodied by the Trump era.
The man who reportedly killed Collins was a white student named Sean Ubanski, who is said to have been involved with a Facebook group called Alt-Reich: Nation.
A lynching is a spectacular murder that serves as a warning to a whole group, as did Jim Crow-era hangings and 2015's murders at Emanuel AME Church. The Collins killing reinforces the fear in African Americans that there is no space or activity - not buying Skittles in a suburb, buying a toy in a store, or going to a party - which is safe for us.
State representative Oliver's call to lynch those standing up to Confederate hagiography is a warning to people fighting anti-blackness that we're in danger. Regardless of intent, Collins' lynching assaulted African Americans everywhere, as did Oliver's threat.
Those presenting these kinds of sentiments are being emboldened by the Trump era, in which lynching history and culture are a part of what it means to "make America great again".
Urbanski and Oliver are white men. So are Dylann Roof, most people who kill police and most people who commit mass shootings. Yet unlike Muslims, immigrants or black people, white men as a group will not be broadly pathologized or stigmatized by association.
Few in media will wring their hands about the violence of white male culture or ask what needs to be done to de-radicalize this dangerous demographic. The American pastime of fear-mongering about "the other" while ignoring murderous white men is a US tradition older the constitution. And it is one that has increased perilously under Donald Trump.
Trump is making racial violence worse in two ways. First, he is overwhelming the news with his own drama and scandal. As charges of a coverup about Russia play out, Trump is guilty of another kind of coverup already: of overwhelming just about every other important story in the nation.
Multiple times a day, Trump's scandals crowd out everything else (and, being a powerful white man, he gets away with it). Jordan Edwards' killing by a police officer facing rare murder charges should have been a major story in the past few weeks, as should the lack of punishment for the killing of Alton Sterling and the lynching of Collins. But Trump pushes them off the radar by whining that he's being treated "unfairly".
Trump has been legitimizing the violent expression of white nationalist sentiment for years, by calling for the executions of the Central Park Five despite their innocence and by opening his campaign by calling Mexicans "rapists". Every time Trump has opened a hotline to report illegal "aliens" or tried to ban Muslims from entering the US, he has allowed white, Christianist supremacy to blossom in defending an "America first" stance.
By appointing to the Department of Homeland Security Sheriff David Clarke, a demagogue who ran a jail where a person died of dehydration after being denied water for a week and who called Black Lives Matter a "terrorist" organization, Trump has empowered anti-blackness legally and extralegally.
And in appointing the equally racist, but bureaucratically efficient, Jefferson Beauregard Sessions, Trump has told white men that there is no punishment for being the kind of man Coretta Scott King would write a 10-page warning about. Quite the opposite: if you suppress the black vote and want to amp up mass incarceration, you could become attorney general.
The rise of Trump has fueled the rise of the so-called "alt-right". This in turn has led to a not very intellectual, but increasingly openly racist, roster of white supremacist speakers coming to college campuses. Much of the mainstream media has not taken the potential consequences of white supremacists being on the lecture circuit seriously enough, focusing instead on their fashion sense. No surprise, these speakers have led to an increase of white supremacist activity on campuses.
And in this toxic stew, Collins was killed at the University of Maryland. It's not just that Trump and his cronies have failed to take a lead on racism; rather, they have succeeded in leading on racism, but in the wrong direction. This has created the mess we are in.
Of course, anti-blackness existed before Trump. But while officials have thus far declined to label Collins' murder a "hate crime", it's important to remember that violence cuts many ways, and how it functions once it has been committed cannot be determined simply by the perpetrator's stated intent.
Asian Americans experienced a specific kind of racial violence in seeing the video of bloody David Dao dragged off that United Airlines flight; black women were subjected to a particular kind of violence when they saw the video of Sandra Bland.
Richard Collins paid the highest price for the violence enacted by his killer. But his lynching - and Oliver's call for lynching - have a hefty price for all black people living in a country where racist men like President Trump, attorney general Sessions, Sheriff Clarke and Richard Spencer wield so much power.
[Steven W Thrasher is writer-at-large for Guardian US. He was named Journalist of the Year 2012 by the National Lesbian and Gay Journalists Association. His work has appeared in the New York Times, the Village Voice, Rolling Stone, BuzzFeed, the Advocate and more. Follow him on Twitter at @thrasherxy or visit his website.]