Urgent Call: On Day 40 of Mass Palestinian Hunger Strike, Advocate for a Military Embargo of Israel

Hundreds of Palestinian political prisoners are now approaching their critical sixth week on hunger strike, and they have made an urgent appeal for international solidarity. The Palestinian BDS National Committee (BNC) calls for immediate international action towards implementing a comprehensive military embargo on Israel, similar to that imposed against apartheid South Africa in the past. 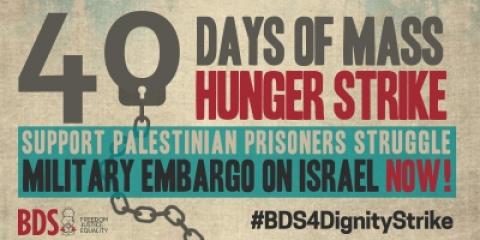 ,
Hundreds of Palestinian political prisoners are now approaching their critical sixth week on hunger strike, and they have made an urgent appeal for international solidarity. As they hit Day 40 of their courageous Dignity Strike this Friday, May 26, the Palestinian BDS National Committee (BNC) calls for intensifying global Boycott, Divestment and Sanctions (BDS) campaigns to amplify the prisoners' legitimate and just demands.
ACT NOW. Click here or see below for some ideas on what you can do.
In particular, the BNC calls for immediate international action towards implementing a comprehensive military embargo on Israel, similar to that imposed against apartheid South Africa in the past. International bodies - including banks, private military corporations, research centers, universities and governments - must stop enabling Israel's military and security apparatus, and stop facilitating the development of Israeli military technology. As long as military ties continue, the international community is effectively sending Israel a clear message of approval to continue its severe violations of international law, including its violations of basic prisoners' rights. 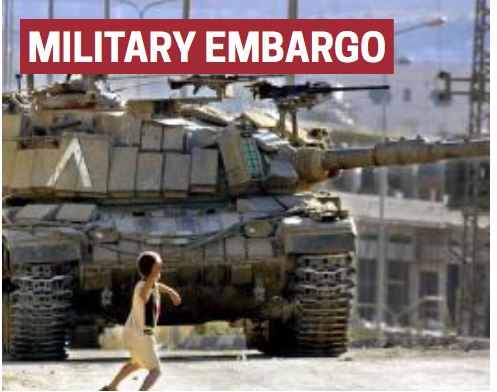 This is a critical moment - with every passing hour, Palestinian hunger strikers are risking death. Their health is rapidly deteriorating as they maintain their commitment to assert their dignity and win their internationally recognized rights. A comprehensive military embargo on Israel is long overdue and as urgent as ever.
Palestinians have come together in remarkably strong support of the Dignity Strike. There have been two general strikes with mass participation across historic Palestine. The general strike on Monday, May 22 was the largest since the first Intifada (1987-1993). Rallies and creative actions are happening on a daily basis in Palestinian refugee camps across the region. Those living under Israeli military occupation are also demonstrating in the streets, shutting down Jewish-only settlers' roads, bringing work and traffic to a standstill and refusing the entry of Israeli products into supermarkets. Across solidarity tents the slogan "boycott your jailer" rings loud.
International action is needed to support and sustain these inspiring grassroots mobilisations as Israel has responded with its predictable use of brutal military force and repression. At least one demonstrator, 23-year old Saba Abu Ubeid, has been killed by an Israeli sniper. A second young man at a solidarity march was shot in the head by an Israeli settler.
ACT to support the Dignity Strike. There are many ways. On May 26, Day 40 of the Dignity Strike:
1. Join the #BDS4DignityStrike social media campaign. Share this image widely, using the hashtag #BDS4DignityStrike and sharing our call to action: http://bit.ly/BDS4DignityStrike 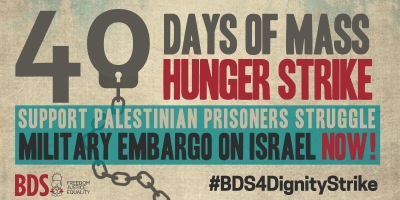 2. Organize a banner drop or street action in your community or campus to raise awareness about the Dignity Strike and call for a military embargo. Use #BDS4DignityStrike to share pictures from your action.
3. Do your research and launch a divestment campaign. Your bank or pension fund are likely to have collaboration with Israeli military companies. Pressure them to divest.
4. Start a campaign for your university to cut all ties with Israel's military industry. Universities often conduct joint military or dual-use research with Israel or with weapons companies that supply the Israeli military.
5. Write to your elected officials, multilateral bodies and the UN to raise the issue of the Dignity Strike and build pressure to exclude Israeli military companies from contracts and eventually impose a military embargo on Israel.
6. Create your own BDS-related action. Don't limit yourself to this list.
The Palestinian BDS National Committee (BNC) again and again reaffirms its full support for the Dignity Strike. We call on people of conscience and citizen groups to take urgent action, mainstreaming and escalating military embargo campaigns as an effective nonviolent means of holding Israel accountable to international law and ending its fatal impunity.
Solidarity,
Mahmoud Nawajaa
BNC General Coordinator
Ramallah, Occupied Palestine
The Palestinian BDS National Committee (BNC) is the largest coalition in Palestinian civil society. It leads and supports the global Boycott, Divestment and Sanctions movement. Visit our website and follow us @BDSmovement