Israeli Police Broke My Arm, But They Can’t Stop Me From Resisting — Or Speaking Out

What I’m experiencing in this moment is a small example of how the occupation is used to take away agency from the Palestinian people on a daily basis. Each and every day, Palestinians are subjected to arbitrary checkpoints which delay their travel, restricted water which strips them of basic dignity, home demolitions which tear families apart, and constant surveillance that has seeped into every aspect of Palestinian society. I am broken but not finished. 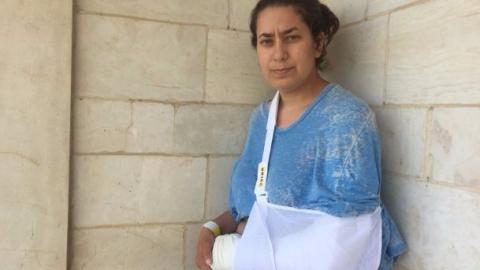 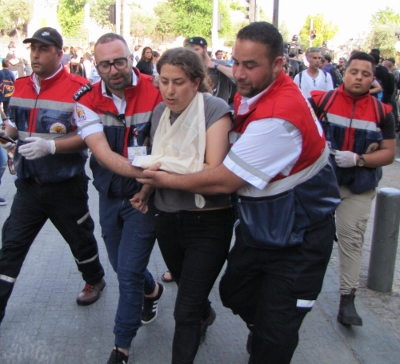 In a matter of seconds, Israeli police broke Sarah Brammer-Shlay’s arm - and now she’s facing a $25,000 hospital bill for surgery and recovery that her insurance is refusing to cover.
Sarah is one of the most dedicated leaders of our movement. Can you chip in to help her cover the costs?
Last week, Sarah and I joined 50 other Jewish anti-Occupation activists in Jerusalem to protest the annual March of the Flags, where settlers and right-wing extremists march through the Muslim Quarter shouting slogans like “Death to Arabs.” We linked arms and blocked Damascus Gate in an attempt to prevent the police from closing down Palestinian shops and legitimizing this march.
When Israeli police moved in to break up our peaceful demonstration, they began assaulting us, grabbing us by the throat, and throwing us to the ground. One officer grabbed Sarah from behind and broke her arm. It was terrifying - but Sarah remained steadfast and nonviolent throughout it all.
Sarah’s surgery is tomorrow. To make matters worse, she just received some bad news: her travel insurance will not cover her surgery. That means she needs to pay the entire cost of the surgery upfront in less than 24 hours - and she needs our help.
We still need over $10,000 more to make the surgery happen. Can you chip in $10 today to help Sarah get the care she needs?
I spent nearly every moment in the weeks before the demonstration at Damascus Gate with Sarah. We were co-trip leaders on the Center for Jewish Nonviolence delegation, supporting the 130 Jews from all over the world (including more than 40 IfNotNow members) who came to do direct solidarity work in Israel/Palestine.
I watched her determination and brilliance shine through despite late nights, early mornings, and lots of hard work. In the fall, Sarah will be attending rabbinical school so she can continue to support our community - and I can't wait to see where she leads us.
On Jerusalem Day, Sarah and I witnessed the harsh violence of the Occupation - and we know that it is just a small glimpse into the violence Palestinians experience every day.
As American Jews, we must resist decades of communal support for the Occupation. Next week, IfNotNow will be mobilizing the American Jewish community all over the country to confront 50 years of Occupation. We believe in a different vision for our community - and part of that is taking care of each other.
Sarah’s arm was broken because she was nonviolently protesting the Occupation and standing up for the rights of all Palestinians and Israelis. Let's honor her work and show up for Sarah in this painful moment - donate right now and share with your networks.
With gratitude,
Ethan Buckner
IfNotNow
P.S. If you’ve already donated, thank you! Please share this message and spread the word to your networks - every little bit helps.
P.P.S. To hear more about our Jerusalem Day action in Sarah's own words, check out this article.
Israeli cops assault American Jewish activists in Jerusalem Day protest
By Natasha Roth
May 24, 2017
+972 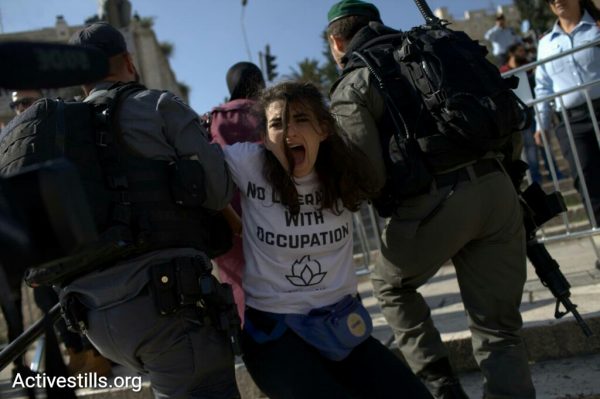 An activist with IfNotNow is carried away by Israeli police during a Jerusalem Day protest, Jerusalem, May 24, 2017.
credit: JC/Activestills.org // +972

Israeli police broke the arm of an American Jewish activist and injured several other anti-occupation demonstrators while forcefully dispersing a Jerusalem Day protest in the Old City on Wednesday.

The demonstration, held at Damascus Gate by American and Israeli Jewish activists with IfNotNow, Free Jerusalem and All That’s Left, took place during the March of the Flags, an annual right-wing parade that habitually results in violence against Palestinians from both its participants and the Israeli police units escorting them. The march is heavily funded by the Jerusalem Municipality.

The parade passes through the Old City’s Muslim Quarter, and Palestinian traders along the route are ordered by police to close their shops during the march. IfNotNow organizer Yonah Lieberman told +972 Magazine that Wednesday’s protest was aimed at trying to block the police from clearing out the Muslim Quarter, forcing them to reroute the march. 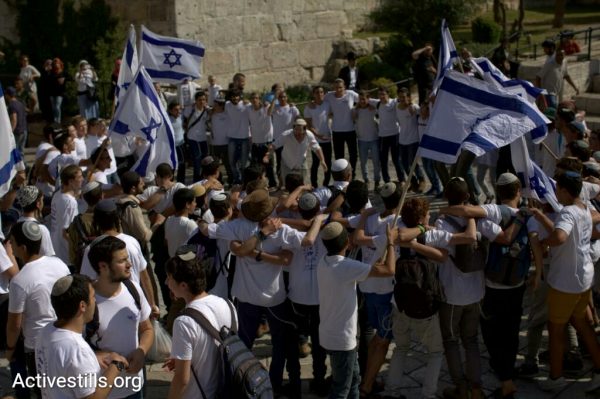 Israelis take part in the “March of the Flags,” an annual event on Jerusalem Day held to mark what the Israeli Right sees as the ‘unification’ of the city, May 24, 2017.
credit: JC/Activestills.org // +972

“[We] decided that it was important to confront the violence of Jerusalem Day head-on,” Lieberman said. “Specifically, [it was] important for us to do all that we could to demonstrate the way that Israeli state violence is used against Palestinians in order to protect right-wing Jewish extremists.”

Around two dozen activists linked arms in front of Damascus Gate, Lieberman explained. He noted that while the group tried to avoid direct confrontation with the march participants, they were “charged at” by right-wing Israelis, before being ordered to move by Israeli police.

Video footage from the protest, shot by Naomi Dann, an activist on the scene, shows police dragging protesters out by their arms and by the neck. Lieberman, who was filmed being carried away in a headlock, can be heard saying, “I can’t breathe” to the police holding onto him. 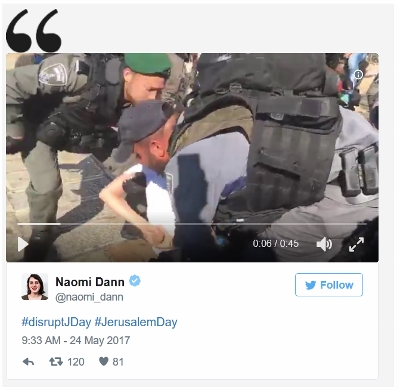 The activist whose arm was broken, Sarah Brammer-Shlay was evacuated in a Palestinian ambulance — whose operators, in support of the protest, waived the fee for the ride — to the Hadassah Medical Center in Jerusalem. Numerous other protesters were suffering from bruises and the after-effects of being choked.

Neither the Jerusalem Police nor the Border Police responded immediately to a request for comment. Should a response be received, it will be included below. 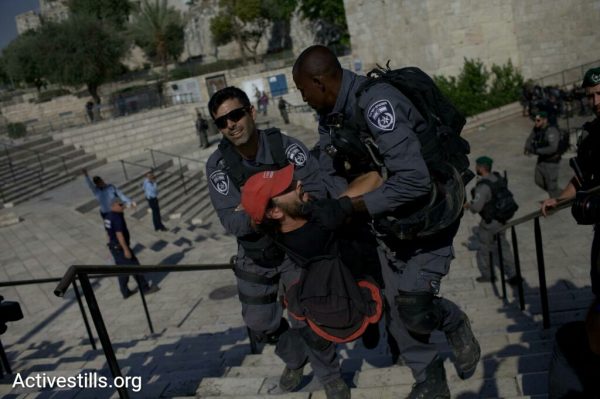 A protester is dragged away by Israeli riot police during a Jerusalem Day protest, Jerusalem, May 24, 2017.
credit: JC/Activestills.org // +972

Many of the participants in the protest had traveled from the West Bank, where they had been participating in the Sumud Freedom Camp — a joint initiative by a coalition of Palestinian, Israeli and diaspora Jewish anti-occupation groups. On Saturday night, Israeli soldiers dismantled the camp and stole its generator, although the activists remained onsite.

For the organizers, Wednesday’s protest in Jerusalem was just the latest step in a burgeoning anti-occupation movement among diaspora Jews.

“Never before has such a coalition come together to put together this kind of action on Jerusalem Day,” Lieberman said. “This was a deeply significant action, demonstrating the growing Jewish anti-occupation movement across the world.

“This is a significant moment for us. Our generation is rejecting the occupation. In [its] 50th year, it felt deeply significant for us to come together and put our bodies on the line.”

Update 25 May, 2017: Israel Police Spokesperson Mickey Rosenfeld responded to a request for comment on Brammer-Shlay’s arm being broken by police:

“A resident of East Jerusalem arrived at Damascus Gate and hoisted a Palestinian flag, while calling out towards them [the response does not clarify who ‘they’ are — n.r.]. Clashes broke out between the two sides and police forces separated them. At the same time, police were attacked by the suspect and an additional suspect who didn’t follow police orders and even attacked police. A police officer was evacuated after being hit on the head by an object. When the suspects were arrested left-wing activists started gathering at the scene and sat on the parade route, and were evacuated.”

This is an odd and disingenuous response. Not only does it not deny that the police broke Brammer-Shlay’s arm, it fails to answer the question at all — and makes the disturbing insinuation that alleging clashes between Palestinians and police is a suitable justification for brutalizing nonviolent demonstrators.

[Natasha Roth is a writer, editor and translator. My work has appeared in The London Review of Books Blog, Haaretz, The Forward, The Daily Beast and The Fair Observer. I write under my family’s true last name in memory of my grandfather, Kurt, who was forced to change his name to ‘Rowland’ when seeking refuge in the UK during WW2. She also writes at: www.natasharoth.com ]