Trump Turns Back on a Future with Cuba

In his perverse fixation on overturning all things Barack Obama, President Donald Trump now turns his attention to Cuba, the island located 90 miles off our shore. Reports are that the president plans to travel to Florida to announce that he will reverse Obama’s opening to Cuba, reinstate restrictions on the right of U.S. citizens to travel to Cuba and curtail business opportunities that Obama had opened up by executive order. 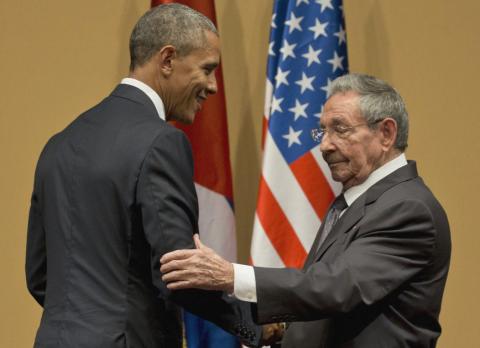 Then-President Barack Obama and Cuba President Raul Castro shake hands in a meeting in Havana in March 2016.,Ramon Espinosa/AP // Chicago Sun-Times
This is, in a word, ridiculous. The United States maintained an economic embargo on Cuba for more than 50 years. It plotted repeatedly to assassinate Fidel Castro and to overthrow his regime. It painted Cuba as a terrorist nation for its support of Nelson Mandela in the fight against apartheid. For more than five decades, a succession of U.S. presidents — cowed by the right-wing Cuban community in Florida — enforced an economic embargo even though the policy increasingly isolated the U.S. from its neighbors in the hemisphere and its allies across the world. When Obama finally went forward with a limited opening, he was doing more to end the isolation of the U.S. than of Cuba.
Now Castro, the leader of Cuba’s revolution, is dead. His brother Raul has announced he will leave office next year. The Soviet Union is no more; the Cold War is over. A new generation is coming to power in Cuba and a new generation of Cuban-Americans is rising in Florida. The vast majority of Americans and the vast majority of Cuban-Americans support free travel to Cubans.
So why would Trump want to revive the failed policies of the past? The reasons range from the petty to the perverse. Trump’s hatred of Obama is apparent. From Obamacare to climate policy to Cuba, he seems intent on overturning whatever Obama did — no matter how great the cost to the American people.
In the campaign, Trump pledged in Florida to overturn Obama’s opening. Right-wing Cuban-American legislators — Republican Sen. Marco Rubio of Florida, Democratic Sen. Bob Menendez of New Jersey and Republican Rep. Mario Diaz-Balart of Florida — have lobbied Trump hard to revive the travel ban and embargo. According to the New York Times, Diaz-Balart exacted a promise from Trump as a price for his vote in favor of Trumpcare. He signed off on depriving 23 million Americans of health care coverage in order to tighten the screws on Cuba.
Obama’s policy of engagement, however halting, has already shown results. Engage Cuba, a U.S. business lobby group, published an economic impact analysis on the costs of reversing Obama’s policy. It put the cost at as much as $3.5 billion in lost revenues and 10,000 jobs lost in the travel industry over the next four years. Commercial contracts that will create $1.1 billion worth of U.S. exports to Cuba in the next five years would be broken, costing more than 1,000 jobs a year.
Once more the right of Americans to travel would be sacrificed, in the name of what? Petulance? Perversity? Undying hatred? The Trump administration has made it clear that in its America First foreign policy, America’s economic and security concerns will not be sacrificed in the name of human rights. But it rationalizes its reversion in Cuba on the grounds of defending human rights and spreading democracy. This is at best what former Obama adviser Ben Rhodes called a “tragic irony,” given the Trump administration’s “complete lack of concern for human rights around the world.”
Surely, after more than five decades we have learned that Cubans, proud of their revolution and their independence, will resist economic or military coercion. One would think that Trump, who trumpets his business background, would understand that open relations with Cuba — trade, travel, human and cultural exchange — will have far more impact in generating pressure for change than a reversion to the failed embargo.
Under Castro, Cuban education and health care became the envy of Latin America. An educated generation now rises to power yearning for more. The U.S. should engage them, not seek to isolate them.
Email: jjackson@rainbowpush.org
Subscribe to Portside