labor If Ben & Jerry’s Is Progressive, Why Won’t It Protect Its Farmworkers? 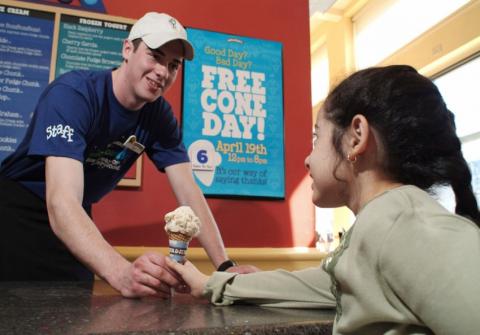 A Ben & Jerry's worker hands an ice cream cone to a customer on Free Cone Day in Burlington, Vermont. , Business Wire
In December of 2009, a young farmworker named José Obeth Santiz Cruz was killed on the job in Fairfield, Vermont after his clothes got caught in a mechanized gutter scraper. Cruz’s tragic death led to the creation of Migrant Justice, an organization demanding human rights for migrant farmworkers in the state.
Five years later, Migrant Justice approached Ben & Jerry’s, the popular Vermont-based ice cream company, and invited them to join their ‘Milk with Dignity’ program, a movement of farmworkers and activists that calls on companies to put an end to rampant industry abuses. Despite Ben & Jerry’s progressive reputation and stated commitment to social causes, the company has so far declined to formally sign on to a grassroots initiative led by some of the most exploited workers in the state.
Now, Vermont farmworkers are escalating their campaign, building from years of organizing in an industry fraught with abuses. The Milk with Dignity campaign was birthed after years of movement dialogue and research, including the release of a survey showing that 40 percent of Vermont farmworkers earn less than minimum wage.
Vermont farmworkers worked directly with the Florida-based Coalition of Immokalee Workers (CIW) to construct a campaign capable of taking on large companies, including businesses that have cultivated a progressive image. The CIW spearheaded an internationally recognized anti-slavery campaign, which has liberated more than 1,200 farmworkers from bondage in the United States.
In 2010, the CIW forced the Florida Tomato Growers Exchange to adopt farmworkers’ ‘Fair Food Program,’ which covered more than 30,000 workers. According to a joint press release from the two organizations, the agreement “[includes] a strict code of conduct, a cooperative complaint resolution system, a participatory health and safety program, and a worker-to-worker education process—to over 90 percent of the Florida tomato industry.”
CIW’s strategy has already borne some fruit for Migrant Justice. In May of 2015, Ben & Jerry’s agreed to work with Migrant Justice in implementing the Milk with Dignity program in their supply chain.
However, the ice cream giant has yet to officially endorse the agreement. Migrant Justice’s Will Lambek told In These Times that, while both sides are unable to speak publicly about the contract negotiations, he can confirm that Migrant Justice is talking with Ben & Jerry’s frequently. Lambek says he is optimistic about the process, but he pointed out that his organization is prepared to do “whatever we can, whatever it takes to get Ben & Jerry’s to support this campaign.”
That meant standing outside of Ben & Jerry’s locations on April 4, during the company’s Free Cone Day, and passing out information about the campaign. The following week, activists protested outside of a Ben & Jerry’s board meeting in South Burlington. "To get those last things resolved, we have this whole organization to go through, and it's not easy," said Ben & Jerry’s board director Jeff Furman after listening to dairy workers speak. "But there's a lot of understanding and concern for the workers’ struggle."
Most recently, on the two-year anniversary of Ben & Jerry’s unfulfilled commitment to Milk with Dignity, Migrant Justice organized a 13-mile march from Vermont’s State House to Ben & Jerry’s factory. In addition to being the place where the company’s famous ice cream is made, Lambek pointed out the city is also a big tourist attraction in Vermont, making it an ideal location to inform consumers about the issue.
One of the marchers is farmworker Enrique Balcazar. Prior to the action, he wrote a piece for Civil Eats describing his first job in Vermont, after moving to the state from Mexico at the age of 17:
The farmer had me working 12 to 15 hours a day, with no day off. At the end of my first week, my body aching from over 80 hours of hard labor, I received my first paycheck and couldn’t believe what I saw: $350, or just over $4 per hour. At that time, I had no idea what the minimum wage was, but I knew that it wasn’t fair pay for the work I had done. But when I tried to express my frustration to the farm owner, he simply told me that’s how much the job paid.
A few months after coming to Vermont, organizers with Migrant Justice visited my farm and invited me to a community assembly, where I joined 30 other farmworkers in sharing food and swapping stories about abusive work conditions just like mine. I was happy to find my community, but angry to find out that we were all suffering. Then and there, I decided to get involved in the fight for my rights.
Workers like Balcazar appear to be taking considerable risks to fight this battle in a political climate marked by escalated immigration enforcement. Shortly after the Milk with Dignity campaign was announced, Balcazar was detained by ICE. After 11 days in an immigration jail he was ordered release by a judge. “I’m just one of many farmworker leaders who has been targeted by the President’s deportation force for speaking out for my rights,” he wrote.
After the march on Ben & Jerry’s factory two of the participants, Yesenia Hernandez-Ramos and Esau Peche-Ventura, were arrested and held on immigration charges. They’re currently at a detention facility in New Hampshire pending a hearing to determine bond. On June 23, Migrant Justice held a rally calling for their release.
Ben & Jerry’s released a statement about the arrests. "We are concerned that hard-working, productive members of our community, who contribute to the success of dairy farms in Vermont, would face criminalization," the company said. "We need policy change that serves Vermont's dairy workers, farmers, and industry as a whole."
Migrant Justice certainly agrees with that sentiment. Now, the organization is urging Ben & Jerry’s to put its principles into practice.
Like what you’ve read? Subscribe to In These Times magazine, or make a tax-deductible donation to fund this reporting.
MICHAEL ARRIA
Michael Arria covers labor and social movements. Follow him on Twitter: @michaelarria