This new book highlights the technology at the heart of what reviewer Jill Leovy calls "surveillance-driven policing," and the heightened dangers this new set of law enforcement tools pose to democracy. 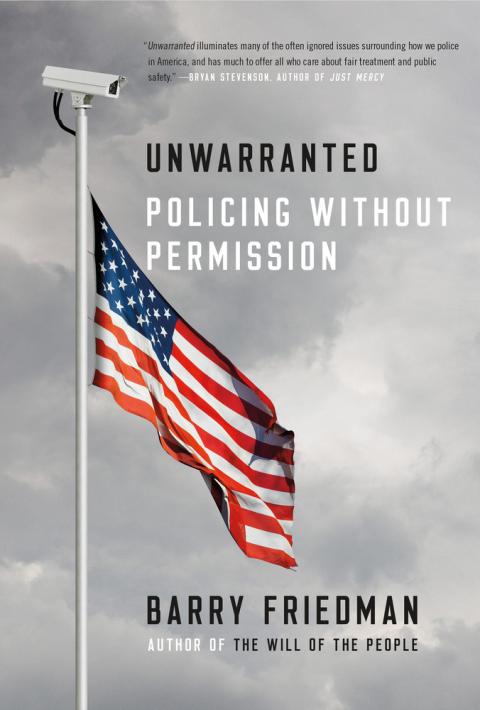 Criminal justice is neither a puzzle to crack nor an engineering problem to solve but a negotiation—a process by which humans reach consensus about violent conflict. It cannot be ceded to robots and algorithms. The system requires human victims, human witnesses, and proceedings on a human scale. Real people must participate in the assignation of guilt—not because of a lack of means, but because human participation is the point.

At its core, law is about discrete events, not conjectured risks. It asks: What can we agree happened? What’s to be done about it? That’s the problem inherent in technology-driven, predictive approaches to law enforcement. They may have their uses, but criminal justice is not one of them. Surveillance and conflict resolution are fundamentally different enterprises. Surveillance-driven policing seeks to anticipate wrongdoing rather than respond to it. Such a system does not ask, What happened? It asks, What might happen? The answer, of course, is anything. The open-ended logic of predictive policing argues for the increasing escalation of state intrusions, using swiftly advancing technology.

New York University law professor Barry Friedman addresses this danger in Unwarranted: Policing Without Permission, a sprawling book—part survey, part manifesto—that offers a catalog of horror stories and an inventory of scary technologies infiltrating everyday law enforcement: radar flashlights that see through walls, drones that fly over back yards, malware that can record our every keystroke, thermal devices that reveal our movements, license plate readers that can track people’s movements. Friedman describes an assortment of court rulings, policy drifts, and errors that he says have dangerously watered down the Fourth Amendment and unleashed a new era of normalized spying using superhuman tools.

The remedy, he argues, comes down to what he calls “democratic policing,” which is also the focus of his nonprofit organization, the Policing Project. He takes on muddled court rulings, inert legislators, and the tendency toward “mushy balancing” of security versus privacy. He argues that police and security agencies need clear rules that have been democratically vetted, not merely bare limits on discretion.

In practice, this means that judges should invite legislative action when in doubt about what constitutes probable cause, how to define a search, or how to assess emerging technologies. They must “refuse to allow emerging technologies to be used by police for surveillance until rules are in place to regulate them.” A law-enforcement agency should have to seek permission to employ new sense-enhancing technologies, and justify new practices with evidence showing that they work. It should likewise refrain from targeting any particular class of people for searching and spying unless it can demonstrate “the problem it is addressing is pervasive in that group” and the interest at stake “actually is advanced by what the government is doing.”

Friedman is an engaging guide to the legal issues, and despite some tendentious language (he describes one officer’s enforcement efforts as “hyper-active” and suggests that others are out to satisfy “cravings for control”), he is reasonably balanced, more pragmatist than ideologue.

But the book is highly partisan nonetheless. With the exception of police body cameras, which Friedman justly questions on privacy grounds, he adheres to a progressive party line. He is as quick to find fault with the use of eyewitnesses in court—a foundation stone of a people-centered justice system—as he is to condemn massive-scale storage of personal data. He relies for evidence on lawsuits, newspaper clippings, one-sided anecdotes, and the findings of like-minded colleagues.

And Friedman yields to a common scholarly impulse to minimize violent crime. He notes, for example, the reported rise of urban crime in the 1960s and 1970s, but then shifts to talking of the fear of crime, as if baseless hysteria were all that anyone ever had to worry about. But death rates from homicide in the ’70s were staggering—nearly twice the rate of recent years, and catastrophic among some cohorts, such as black men in early middle age.

In the same vein, Friedman blames criminal-justice excesses almost exclusively on a misguided war on drugs, and offers the familiar argument that disproportionate police stops of black people aren’t justified because black Americans are no more likely than white to abuse drugs. But widespread consent searches and longer sentences were also part of a police strategy to rein in violence. And black people remain—indisputably—many times likelier than white people to commit and fall victim to homicide. Is it so easy, then, to argue that this does not necessitate vigorous counteraction? Is not homicide exactly the kind of pervasive problem, specific to a class, that Friedman argues may justify profiling?

It’s actually quite possible to argue for containing broad-scale, intrusive, surveillance-style policing without discounting the agonizing toll of violence in minority communities. Friedman touches on why, noting that such practices often damage public trust and squander resources. But because he elevates defense advocacy to a political philosophy—and dismisses many opponents as mere antidrug zealots—he ends up giving lip service to some of the more compelling aspects of his own argument.

Far from being an inconvenient fact, the high rate of violence in minority-dominated urban areas teaches us just how much is at stake when people come to see the state as alien, mechanical, and arbitrary. Indeed, when those people cease to look to the state for redress and protection—sensing instead that the state is more interested in assessing them as risks than in judging their actions—the result is more violence, not less. Street justice is formal law taken down to size and reflected back to us in a funhouse mirror. It shows us what can happen when law drifts too far from its roots in conflict resolution—when it loses the crowd, so to speak.

Successful law enforcement works when it constantly renews the invitation to participate and is more about persuasion than finding absolutes. It fits within a criminal justice system that prevents violence not just by seeking truth but also by establishing a political consensus about legitimacy. This is worth remembering as authorities pursue a course of ever-more-perfect prediction—ever-more-airtight prevention—through ever more searching, tracking, and eavesdropping. To partisans on both the right and left, aspects of robot policing may be tempting. But the sacrifice may be exactly that which makes justice work.

Jill Leovy is the author of  Ghettoside: A True Story of Murder in America, a finalist for the 2016 National Book Critics Circle Award for nonfiction. She is a staff writer for The Los Angeles Times.