Although advances for the South African people have been made under ANC leadership, continuing poverty and unemployment made worse by the recession and decline in the value of the Rand. The solution to our frustrations with the ANC will not be solved if the reasons that have led to the failure to assert working class hegemony within the tripartite alliance of ANC, COSATU and SACP is not accurately diagnosed. This was the question before the SACP Convention. 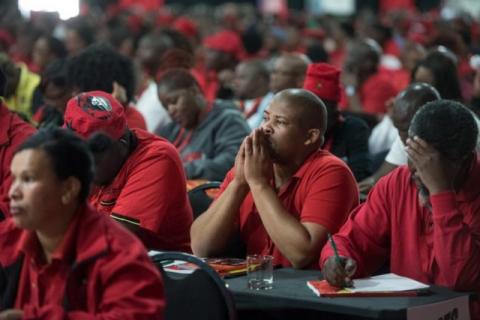 There was much speculation in the corporate media surrounding the deliberations and outcomes of the 14th National Congress of the South African Communist Party (SACP) which took place from July 10 - 15 in the Birchwood Hotel in Johannesburg.

From the outset the gathering engaged in scathing criticism of the ANC-led government and President Jacob Zuma. Allegations of corruption involving leading figures in the ANC and their relationships with a family of Indian nationals, the Gupta-owned firms, which critics claim weld an unjustifiable influence over appointments and policy.

Although several reports in the South African press suggested that a decision had been made to contest the 2019 presidential race as the SACP, the Congress agreed to study these proposals advanced by provincial structures and to hold another Special Congress in 2018 where an actual roadmap will be announced. Secretary General Dr. Blade Nzimande appealed for the SACP delegates to prioritize fundraising saying that cadres must enhance the financial status of the organization.

On the final day of the Congress, Nzimande implored the delegates stressing: ”Let us not come here, sing about state power, take resolutions, and then go sit back and not fundraise for the SACP. Every party cadre is a fundraiser… we have been poor for too long, there is no reason why we should continue to be poor. But please cadres, do not take money from the Guptas… we do not want it. It will bring us bad luck. Do not take dirty money… go and fundraise legitimately from our country’s workers, especially, and many other people who are sympathetic to us.” (Citizen, July 15)

As it related to the notions that the SACP was seeking to break up the Tripartite Alliance, Nzimande was quoted as denying that any decisions had been made. He noted that there was no easy solution in approaching the challenges facing the ANC and the Alliance in the 2019 national elections where a new president and parliament will be chosen. The SACP Secretary General asserted that a resolution of these issues was a process which could only be resolved through broad consultations with Alliance partners.

Nzimande went on to say: ”We are not going to be seeking permissions, but at the same time we are saying that given this new conditions [current affairs], how then should we continue working together, because we still believe that the alliance is still relevant. I do not believe that there is any organization that is ready-made to contest elections… we will cross that bridge when we get to it.” (Citizen, July 15)

COSATU, the Working Class and the National Democratic Revolution

At present South Africa is facing a worsening recession with joblessness increasing and the value of the national currency (rand) in decline. However, this is not a situation that is peculiar to this particular country which is the most industrialized in Africa.

In the oil-producing West African state of the Federal Republic of Nigeria, which was said three years ago to have surpassed South Africa as the largest continental economy, at least momentarily, is also deeply mired in recession. The fact that these two leading African countries are facing substantial difficulties is reflective of the continuing dependency by post-colonial states on international finance capital and its markets.

COSATU Secretary General Bheki Ntshalinshali addressed the SACP 14th Congress emphasizing the centrality of the African working class in any efforts aimed at economic transformation. COSATU has endorsed South African Deputy President Cyril Ramaphosa in his campaign to become leader of the ANC as well as the presidential candidate for the ruling party in 2019.

Ntshalinshali told the SACP while acknowledging the advances made for the South African people under ANC leadership over the last nearly quarter-century and the contradictions of continuing poverty among the proletariat, that: “In dealing with both these questions, we cannot afford to be both emotional and metaphysical in our approach. Firstly, we need to admit that the dysfunctionality of the Alliance and the marginalization of the COSATU and SACP are not accidental but they reflect the obvious weaknesses in the organizational power of the working class. The question that needs to be answered is why we have failed to build working class hegemony inside the movement. We cannot just pretend that the solution to our frustrations with the Alliance and the ANC is to give workers and the working class a new address and fail to correctly diagnose the reasons that have led us to be where we are as the working class. But workers need a united and coherent SACP, whether you decide to contest state power or not.” (http://www.cosatu.org.za/show.php?ID=12920)

The Historic Role of the Tripartite Alliance

This coalition of forces which today is represented by the ANC, COSATU, SANCO and the SACP began to consolidate a working relationship among the youth cadre during the early-to-mid 1940s.

Later in 1949, the ANC Youth League (ANCYL) drafted a Program of Action which played an instrumental role in the transformation of the organization in alliance with the-then Communist Party of South Africa (CPSA) that was banned in 1950 under the Suppression of Communism Act enacted by the European-settler National Party which won electoral power in 1948.

With the emergence of the Campaign of Defiance Against Unjust Laws from 1952-1956, various revolutionary forces encompassing the ANC, the Congress of Democrats (COD), Indian National Congress, the Colored People’s Organization (CPO), the Federation of South African Women (FEDSAW), among others sought to engage the apartheid system through a wave of mass protests, strikes and boycotts. By 1956, the National Party regime had charged 156 leaders of the Defiance Campaign with treason leading to a four year trial which resulted in a collapse of the government’s case winning acquittal for the resistance organizers.

Just one year prior to the indictments on treason charges, on June 26, 1955 the Congress of the People was convened in Kliptown where The Freedom Charter was adopted. This document served as a guiding programmatic impetus to the struggle for national liberation from the mid-1950s to the ascendancy of the ANC to power in 1994.

After 1961 Umkhonto we Sizwe (Spear of the Nation) was formed by the ANC and the SACP. By the 1980s a combined mass, armed and industrial workers struggle would break the back of the apartheid system. The unbanning of the ANC and the SACP, the release of political prisoners including Nelson Mandela, Walter Sisulu, Govan Mbeki along with the return of exiled cadre by February 1990 set the stage for the transition to a non-racial democratic dispensation beginning in 1994.

The drafting of a post-apartheid constitution and the implementation of sweeping reforms in the areas of labor, human rights, race relations, women’s rights, economic opportunities and governance, by the late 1990s placed the Republic of South Africa in a vanguard position in the realm of contemporary politics on the continent. Under the leadership of the ANC, South Africa was able to play its inevitable role as a focal point for the consolidation of unity in the Southern Africa region and the advancement of similar objectives in Africa as a whole.

However, problems in the implementation of genuine socio-economic transformation has prompted fierce debate within the respective Alliance member-formations as well as disagreements over strategic and tactical issues in taking the organizations forward towards the realization of the aims of the National Democratic Revolution in the 21st century. The SACP 14th National Congress came on the heels of the ANC National Policy Conference held earlier in the month of July. At the ANC Policy Conference there was discussion on the accusations of corruption and the need to refurbish both the internal operations of the ruling party and the strength of the Alliance.

One South African political analyst voiced trepidation about the possibility of the SACP leaving the Alliance saying it would be ill-advised. Ralph Mathekga noted that both organizations needed each other claiming that the understanding of the present period was greater among the SACP than the ANC.

Mathekga emphasized the need for unity in an interview with the Citizen newspaper, saying: “The ANC does not fully understand state capture and its implications, but the SACP fully understands this phenomenon and it should help the ANC to expedite this issue and resolve it. Without the SACP, the ANC is just a party of slogans without depth.” (July 14)

Although Mathekga’s conclusion that the ANC needed the SACP is well taken, it is highly unlikely that the ruling party cadre from the branch structures right up to the National Executive Committee (NEC) lacks understanding of the contemporary political and economic crisis inside the country. The question is whether an effective policy approach can be developed which is successful in galvanizing the base and the leadership in a manner which fosters unity of purpose and action.

The political alternatives to the Alliance represent an even more fractured social landscape encompassing the minority right-wing Democratic Alliance (DA) and the putative ultra-left Economic Freedom Fighters (EFF) who routinely unite in their campaigns to undermine the ANC and the SACP. COSATU was split with the expulsion of the National Union of Metalworkers of South Africa (NUMSA) in November 2014.

A new labor group called the South African Federation of Trade Unions (SAFTU) was formed in 2016 which has announced that it will create another socialist party. It will remain to be seen if such a party is formed as a viable functioning entity and whether they can meaningfully contest within the national elections of 2019.

The restructuring of industrial and finance capital in South Africa has resulted in profound challenges for labor organizations. As has happened in western capitalist states, the proportion of workers who belong to unions has shrunk significantly. Overcoming these barriers to enhancing the role and authority of the working class is an international phenomenon.

Abayomi Azikiwe is the editor of the Pan-African News Wire