The Mooch, the Donald, and the Goldmanization of Government

It’s somehow fitting that a hedge fund investor who does no investing has now become the spokesman for a president who appears to do very little actual governing. What Scaramucci does very well, however, is promote Scaramucci. The Mooch’s antics make him Trump’s ideal Mini-Me. He’s another empty-hatted showboater, loudly distracting the audience from the pickpockets moving among them.

July 29, 2017 Richard Eskow Our Future
Printer friendly
The Mooch, the Donald, and the Goldmanization of Government Published July 29, 2017 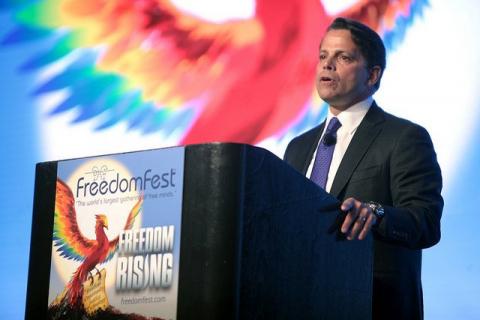 It’s true that most members of Trump’s team, including the president himself, could easily trade nicknames with Anthony Scaramucci. They’re all moochers. Education Secretary Betsy DeVos was tied to a student loan firm and her department’s actions directly benefited the family of a senior DeVos aide, who resigned after the conflict of interest came to light.

There are serious questions about Treasury Secretary Steve Mnuchin’s financial interest in the administration’s investigation of OneWest Bank. And virtually every senior Trump official stands to gain financially by his proposed tax cuts for millionaires and billionaires – an underlying conflict of interest that would let them “mooch” off the poor and middle-class families who would be hurt as a result.

Trump himself is the Moocher-in-Chief, monetizing his presidency to the limits of the law and beyond. He even skimmed from a fundraiser by holding it at a Trump Hotel so the family business could profit from it.

Of course, Anthony Scaramucci would only want to trade away his nickname if he were ashamed of it, but he shows no sign of shame. On the contrary, the brash, self-promoting huckster seems proud of his background as a Goldman Sachs banker turned hedge-fund super salesman.

Scaramucci’s firm, SkyBridge Capital, isn’t even really a hedge fund. It’s more of a hedge fund retailer. Scaramucci closes the deal and then farms the money out to other funds to manage. The firm sponsors a schmoozefest called the SALT Conference every year, where famous speakers talk while everyone in the crowd tries to hustle one another for business. Think of it as TED for greedheads.

Celebrities like like Magic Johnson and Al “Say Hello to My Little Friend” Pacino have put in appearances at SALT. So have famous business people like Dallas Mavericks owner Mark Cuban and hedge-fund investor John Paulson, an early Trump backer who made billions off of the subprime lending meltdown.

And in our “money talks” political environment, it’s not surprising that a number of politicians and officials have also wet their beaks at the Scaramucci trough, including Bill Clinton, George W. Bush, Tim Geithner, and Tony Blair.

It’s somehow fitting that a hedge fund investor who does no investing has now become the spokesman for a president who appears to do very little actual governing.

What Scaramucci does very well, however, is promote Scaramucci. You might think that would make the vain showman who occupies the Oval Office jealous, but you’d be wrong. The Mooch’s antics make him Trump’s ideal Mini-Me. He’s another empty-hatted showboater, loudly distracting the audience from the pickpockets moving among them.

But just to be on the safe side, Scaramucci professes his love for the president loudly and frequently.

In his first few days on the job, Scaramucci has already shown his ability to dazzle and distract the press, turning attention away from the dirty dealing going on all around them. He has incited a showy feud with White House Chief of Staff Reince Priebus, for example, a headline-grabbing move in which he says that the man he once called a “brother” is really only a brother in the “Cain and Abel” sense.

In a call to CNN that was described as a “meltdown,” Scaramucci accused Priebus of “leaking” his financial disclosure forms to the press, a move he had earlier characterized as a “felony.”

Those forms are public, by the way, which means they can’t be “leaked,” and it is not illegal to cite them.

“Meltdown”? To this observer, Scaramucci’s antics look more like the over-the-top theatrics of the “heel,” or designated bad guy, in a wrestling match. (Wrestling impresario Linda McMahon also works in the Trump White House.)

It’s true that those financial disclosure forms reveal some serious ethical concerns arising from Scaramucci’s failure to divest his SkyBridge holdings before entering government, but a good heel is always willing to take a fall for the sake of the show.

In light of that publication’s illustrious literary history, Scaramucci’s foul talk to its reporter was the journalistic equivalent of passing gas in church.

Scaramucci apparently also leaked a story to the press and then complained about the leak, an in-the-ring pratfall that seems to further reinforce the “heel” theory.

It’s working. While the press was writing about about The Mooch’s theatrics, less attention was being paid to the ongoing Goldmanization of Trump’s administration – a trend that poses a serious risk to the American people, and potentially to the global economy.

America’s big banks have a stunning record of proven criminality, and Goldman Sachs is up there with the worst of them. Its rap sheet of documented offenses includes securities fraud, investor fraud, insider trading, and subprime loan abuses. Goldman misled its own customers and bet against them.

A former Goldman trader wrote about its “toxic and destructive” culture, and Goldman Sachs CEO Lloyd Blankfein is widely believed to have perjured himself in testimony before Congress.  Following his committee’s inquiry into banking practices, Sen. Carl Levin concluded that “Goldman clearly misled their clients and they misled the Congress.” The committee recommended that charges be brought against Blankfein, but the Justice Department declined to prosecute.

Trump openly ran against Goldman Sachs, slamming both Ted Cruz and Hillary Clinton for past associations with the firm.  And yet, Scaramucci is just the latest in a long list of ex-Goldmanites to join the Administration. They include Steve Mnuchin, Secretary of the Treasury; Steve Bannon, strategic advisor; Gary D. Cohn, Chair of the Council of Economic Advisors; and, Dina Powell, Deputy National Security Advisor. Trump also nominated Goldmanite James Donovan to be Assistant Treasury Secretary, but Donovan withdrew his name from consideration after meeting political resistance.

This week Trump said he’s thinking about naming Cohn, the former president of Goldman Sachs, to be chair of the Federal Reserve. “He doesn’t know this, but yes he is (under consideration),” Trump said.

Cohn, like Mnuchin and other senior Trump officials, is singing from the Goldman Sachs hymnal. Lobbying reports compiled by Open Secrets show that Goldman has already spent $1,430,000 on lobbying this year, on subjects that include tax policy and weakening bank regulations.

Cohn is one of six Republican officials and members of Congress tasked with forging a “tax reform” plan, a job that aligns nicely with his former employer’s interests. The Republican House voted last week to repeal the Consumer Financial Protection Bureau’s new arbitration rule, scheduled to take effect in September, a move that also aligns nicely with Goldman Sachs’s interests. So does Treasury Secretary Mnuchin’s push to roll back the Dodd-Frank law.

But then, is any of this really a surprise? By turning to Goldman Sachs to staff his administration, Trump has surrendered the nation’s economic policy to the Goldman agenda. He is turning the economy over to some of its worst actors, and all signs suggest that he’s not done yet.

There are, however, no confirmed reports yet that Trump plans to appoint Mr. Pink to a senior position in his administration.