As California stands at the height of the worst housing crisis the state has ever seen, hundreds of tenants across multiple cities are taking matters into their own hands by confronting corporate landlords to demand a freeze on rent increases. The tenants and organizations leading this are part of a new, broad-based coalition, Housing Now!, to fight for the repeal of the statewide restrictions on rent control - established by the Costa Hawkins Rental Housing Act. 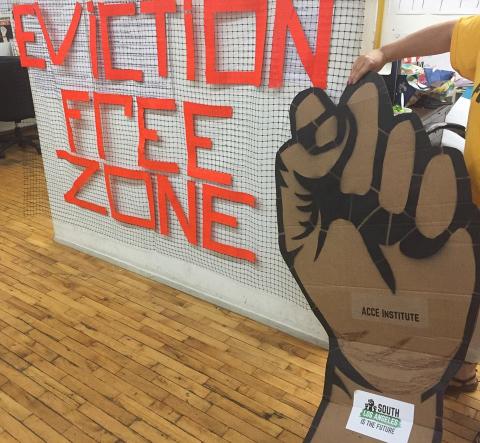 It’s official: The rent in California, not just San Francisco, is too damn high.

California now has the highest poverty rate in the nation when the cost of housing is taken into account. Since 2005, more than 2.5 million Californians have been forced to leave the state in search of an affordable home.

Unfortunately, the prevailing supply and demand — “just build” — mantra put forward by opinion leaders is diverting state government from the hard truth that the market has not responded to the demand of California families for affordable homes — not luxury and market-rate homes.

We are told a big lie, that the solution to our housing crisis is to get government out of the way and leave it to the free market to let affordable housing magically “trickle down” to lower-income households. The truth, though, is developers build to make a profit, not to provide a social need. Luxury housing doesn’t trickle down, at least not at a scale to bring down rents in a meaningful way.

Meanwhile, there are new players in the game, changing the parameters of the problem: the rise of Wall Street’s new rental empire. In recent years, real estate speculators have been taking rent-controlled homes in San Francisco off the market and harassing long-time tenants because Costa Hawkins lets them raise the rents when old tenants move out.

The biggest owners in California are no longer mom-and-pop landlords, but mega corporations like Blackstone and Colony Starwood, and smaller speculators that follow their lead in raising rents. This time, instead of predatory mortgages, we’re seeing predatory rentals.

State laws written by the Realtor lobby, like the Costa Hawkins Rental Housing Act, which severely restricts cities from passing rent control on many types of buildings and on vacant apartments, now serve as a means to line the pockets of landlords and give them the right to charge as much as they want, while more and more of us live with housing insecurity.

Even more urgently, if we want to stop gentrification and rising rents from displacing vulnerable communities, we need to strengthen tenants’ rights and pass laws to keep rents from rising even higher. We need laws that are designed to put our basic needs first, not corporate profits.

This is why families in cities across the state, who have been organizing locally for rent control, tenant protections and affordable housing, are uniting today to repeal Costa Hawkins and expand state support for affordable housing. This movement extends far past the usual suspects: from grassroots volunteer groups to small allied landlords, to highly coordinated labor unions and community organizations. This broad base of organizations and activists have launched of a new statewide coalition called Housing Now, comprised of people who don’t have the luxury of waiting to see if market forces materialize.

Families are being displaced in droves. As speculators buy, raise rents and flip whole neighborhoods, communities are being uprooted entirely. The racial, cultural and economic fabric that makes California beautiful is on the brink of nonexistence, and we can’t wait for market to “just build” and “trickle down” our way out of it. That’s why today families, workers and small landlords are taking direct action by occupying corporate offices and confronting rent-gouging, mega-landlords in dozens of cities across the state to demand a rent freeze and to call on our elected officials the repeal of Costa Hawkins.

No more “supply and demand” as usual. We need Housing Now!  Follow #HousingNow #RepealCostaHawkins and #RentFreezeNow for updates.

Deepa Varma is director of the San Francisco Tenants Union.

**Space is limited and priority will be given to tenants and tenant organizers to attend.

With historic fights for rent control and just cause coming from the people, we are in a movement moment. A bill to repeal Costa-Hawkins has been introduced, new local tenant protections have been passed. What many said was impossible is now possible!

This assembly is open to all tenants seeking resources to organize for housing justice in their communities and organizers looking to connect with state and local campaigns and deepen their work.

We believe the current system of for-profit exploitation of our communities by landlords, developers, and real-estate speculators, seen in rising rents, evictions, displacement, and homelessness, does not work for low-income people and therefore does not work for any Californians. Our collective work for housing justice is grounded in the principles of racial, economic, and gender justice. We believe an injury to one is an injury to all. We believe housing is a human right. We believe to make that a reality we must build the power of tenants and low-income people to shape their communities. This current movement is standing on the shoulders of previous tenant and housing movements in California and beyond, and we seek to learn from the past to build for the future.

Co-Sponsors: Tenants Together, Homes For All, Right to the City Alliance, Alliance of Californians for Community Empowerment