books Bolsheviks and Beyond: Revisiting John Reed's "Ten Days that Shook the World"

On the centennial of the Russian Revolution, John Reed's first-hand look at the uprising of workers, peasants, soldiers and sailors is fit reading about a mass movement that overthrew the old aristocracy and then the bourgeois class itself. An exposition on ordinary people making history for themselves, the book is a gripping account of events in Petrograd, when Lenin and the Bolsheviks lead the various workers councils in finally seizing state power. 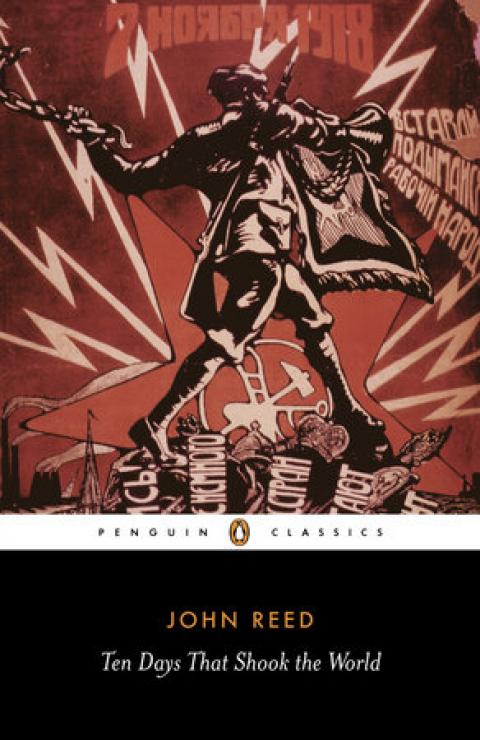 John (“Jack”) Reed wasn’t looking backward to the French Revolution or even the Paris Commune when he chronicled the seizure of power of the Russian Revolution of 1917. As a 30-year-old independent radical journalist, he was looking at it with fresh eyes. What he saw was not just the overthrow of a repressive monarchist oligarchy and its attendant bourgeois class, but a vast democratic, majoritarian movement based on “soviets,” or councils, made up of workers, soldiers, and peasants. Although he had been embedded in Pancho Villa’s rebel army in Mexico and covered Industrial Workers of the World strikes in New Jersey and miners’ struggles in Colorado, it was witnessing the cataclysmic events in Russia that confirmed him as a revolutionary.

The role that revolutionaries—and not just Bolsheviks but Menshevik Internationalists and Left Social Revolutionaries—played in displacing the post-tsar, all-party Provisional Government was catalytic. It was, as Reed saw it, a social revolution that outstripped its purely political implications. Its program—largely articulated by the Bolsheviks—was to break up the giant landholdings and distribute land to the peasants, to move toward socializing industry, and for an immediate armistice without annexations to end the First World War. Above all, it was to have no truck with any of the bourgeois parties, which in their own ways supported the war, opposed workers’ rights, and even looked to a return of the hated Romanov dynasty.

In this centennial year, there is much to herald in the revolution, if not in its aftermath, and Reed dramatically shows why. It was the first revolution in which the working class played an outsized, critical role. Both workers and peasants rebelled against a regime in which they were, in Marxist terms, “objects of accumulation” and not its subjects; they were historical actors, not acted upon by elite political formations. What the revolutionaries understood was that its ruling class can wheedle its way out of any crisis if the working class allows it.

So, what did the Bolsheviks do? As a mass party by 1917, they were in a position to learn from the masses and generalize strategies and tactics from there. The party was, in labor-union terms, rank-and-file shop stewards beholden to their base. A libertarian Marxist (like me, for one) would say that a party has to lead the class, but above all it has to be in a position and a frame of mind to learn from it. Reed’s book is a testament to a class and a party in a unique historical moment getting the balance right.

It is in the context of a real class upsurge that a party matters; the conundrum is that the party can’t be wished into existence overnight, yet it stagnates in periods of low fight-backs, either lapsing into a glorified study group, a newspaper-selling sect, a purely reform-orienting lobbying effort or turning into a group of action freaks—in the most extreme cases, a cult. Witness the disaggregation of Students for a Democratic Society in the late 1960s or the German and Italian New Lefts of the 1970s. What does it mean to be a revolutionary in the age of Trump, or even a progressive reformer? It’s an open question we reds struggle with daily.

The Hegelian maxim—via Engels—that freedom is the recognition of necessity takes its best expression in revolutionary situations, and Reed paints the moment vividly. As Lenin understood it, it was “an extremely unique historical situation,” one in which “absolutely dissimilar currents, absolutely heterogeneous class interests, absolutely contrary political strivings” merged in a strikingly “harmonious” manner. Today, such an event sounds like magical thinking, but it happened, and in a nation where 80% of the population were landed peasants or soldiers and sailors from the peasantry and the bulk of the others were primarily urban working class. There is no deus ex machina in Reed’s history, no factors independent of human agency, and no manipulative puppet masters, least of all the Bolsheviks, who, I would argue, learned as much from the workers’ movement as they taught. What Reed describes is no less than what Marx analyzed: the basis on which a class can emancipate itself.

The two great classes had different origins and goals. The oppressed peasantry were ripe for revolt; they wanted to expropriate the private property of the large estate owners, but they also wanted their own small privateproperties. Socialism was not their goal, but it was the goal of growing numbers of workers. Both groups united behind the slogan of “Peace, Land, and Bread,” none of which interested the provisional government, which could not even supply food to the starving army and masses.

Reed cites Maxim Gorky, editor of the independent newspaper Novaya Zhizn (New Life) as “pointing out that the Bolshevik insurrection meant one thing very clearly; that all illusions about coalition with the bourgeoisie were henceforth demonstrated vain.” Reed also noted that the idea that “the Bolsheviki would remain in power longer than three days never occurred to anybody—except perhaps to Lenin, Trotsky, the Petrograd workers and the simple soldiers.”

For Reed, these soldiers, themselves peasants or workers in uniform, were hardly simple. What they needed was a tactical way forward, something the Bolsheviks provided. Timing was everything. As Lenin said, “Yesterday was too soon; tomorrow is too late.”

Reed summarizes in what could be the book’s coda:

Not by compromise with the propertied classes, or with the other political leaders; not by conciliating the old Government mechanisms, did the Bolsheviki conquer the power. Not by the organized violence of a small clique. If the masses all over Russia had not been ready for insurrection, it must have failed. The only reason for Bolshevik success lay in their accomplishing the vast and simple desires of the most profound strata of the people, calling them to the work of tearing down and destroying the old, and afterward, in the smoke of falling ruins, cooperating with them to erect the framework of the new…

What was the outcome of the revolution? Reed can’t tell us. A protracted civil war, stoked in large part by the British, French, and U.S. governments still smarting over Russia’s exit from the war, left the country in a parlous condition. Reed’s projected three-volume history was never written, and he died in Moscow of typhus in October 1920, one of thousands of victims of the Allied boycott of medical and other supplies to the devastated nation.

Would Jack Reed have remained a Soviet Union sympathizer, especially once Stalin completely destroyed working-class power in Russia? Who knows? It is indicative that in Reed’s book, replete with laudatory mentions of Lenin, Trotsky, and other Bolsheviks, as well as of dissidents within the party, Stalin is mentioned just twice, in passing. More telling is that in the USSR during the Stalin years, possessing copies of Ten Days That Shook the World was considered a crime against the state. In capitalist Europe and the United States, with official enmity toward all things revolutionary, Reed’s book has rarely been out of print. As thick description and analysis, it is still a classic.

[Michael Hirsch is a member of NYC DSA and of its labor branch. A longtime union staffer, activist, and labor writer, he is on the editorial boards of New Politics and Democratic Left; and one of Portside's culture moderators.]

This article originally appeared in the Summer 2017 issue of Democratic Left magazine.