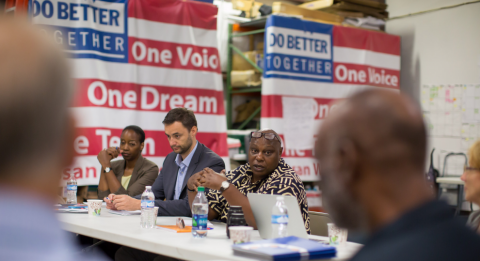 A UAW meeting last year in Caton, Mississippi., Maina Kiai
Most of us were hoping to wake up on Saturday morning to the news of a United Autoworkers victory at Nissan’s sprawling assembly plant in Canton, Mississippi. It wasn’t even close. Despite a decade long union drive, barely 40 percent of Nissan’s workforce voted in favor of unionizing. The bosses will be crowing about this one for a long time.
Hopefully, some of those involved in the failed campaign will break ranks and tell us the inside story about how this unnecessary defeat took place. We need a UAW version of Jane McAlevey, the AFL-CIO organizer who spilled the beans on the union’s top-down management style. There is much to learn.
The UAW, however, was always a bad bet. It has a very long track record of making concessions on wages, benefits and working conditions to the wobbly-positioned “Big Three” automakers, along with a very public and recent record of losing recognition elections at big assembly plants in the South.
An old friend of mine and a former UAW organizer told me this would be the outcome two weeks ago! It was a chronicle of a defeat foretold by some.
UAW’s national organizing staff and key organizers on the ground must have known this was going to be the outcome but chose not to speak out earlier because they feared retaliation and blacklisting. We will see what people say over the next few weeks. Our best organizers in the labor movement know what is wrong but can’t effect the change necessary to win. We are stuck with failed generals whose battlefield defeats reverberate far beyond their little fiefdoms. Every defeat or retreat of a major union impacts us all.
There is little doubt that there is a huge amount of incompetence, bureaucratic sloth and undemocratic rule at work in the UAW’s defeat. But there is more to it. We are witnessing the end result of the anti-communist purge of the labor movement in the late 1940s, the failure of the underfunded ‘Operation Dixie,’ the dominance of business unionism, and the lack of rank-and-file democracy in most major unions.
We, however, are not prisoners of our history. There is a new socialist movement in this country and I believe in the crying need for it to have an industrial strategy. It’s long past time to turn this around. The historic UPS strike of 1997 — when 185,000 Teamsters at the global delivery service won wage hikes, full-time positions for part-time workers and salvaged their pensions after a rank-and-file slate took over union leadership — showed us the way forward. We now need to make it happen.
[Joe Allen is the author of The Package King: A Rank and File History of United Parcel Service.]