Are the Democratic Socialists of America For Real?

DSA has experienced a surge in membership. The question is whether it can translate that enthusiasm into actual change. 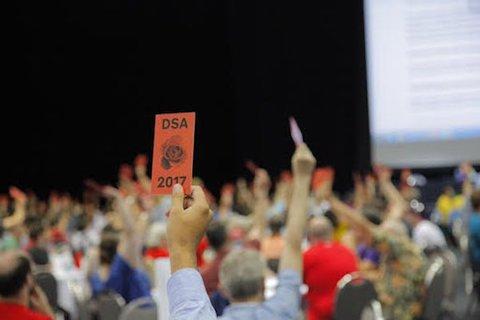 “Life,” he predicted of socialism, “will become a succession of meetings.”

Walzer, a longtime editor of the legacy socialist organ Dissent, was riffing on Marx’s description of day-to-day life in a leftist utopia. It is also an apt way to describe the Democratic Socialists of America’s convention held this past weekend in Chicago, the first since the group’s membership exploded into the tens of thousands following Donald Trump’s election.

As it builds on this momentum, there are several big questions facing DSA. What is its relationship to the Democratic Party? Should central leadership serve as administrators or ideological tone-setters? And how can its membership—which skews white and male—come to represent an increasingly diverse country?

Though discussed, none of these questions were resolved this weekend. What was clear, though, is that a new generation of American leftists is as committed to a new kind of democratic engagement as it is to socialist ideas.

Coverage of socialism’s resurgence has tended to focus on generational and ideological divides, and the fact that young people are voting in droves for old leftists like Bernie Sanders and Jeremy Corbyn. Intellectually, the bedrock faith in capitalism as the global economy’s organizing principle has rarely been so shaky. But fledgling activists on the left are as excited to actually practice politics as they are to talk about politics. They want a movement that can organize, that is willing to engage in civil disobedience to stop Trump’s agenda, and that wants to field socialists for elected office. Because it offers the opportunity to do all three, many see DSA as a natural alternative to both Trump and establishment Democrats.

“As a bottom-up democratic organization, our members all want to have a voice in everything that happens. We want to foster that,” said Maria Svart, DSA’s national director. “We’re really working together to make sure there’s comradely debate.”

The result of a 35-year old merger between the Democratic Socialist Organizing Committee (DSOC) and the New America Movement (NAM), DSA existed for years in relative obscurity before Bernie Sanders’s 2016 bid for the Democratic nomination as a democratic socialist. Following Hillary Clinton’s concession to Trump in the early hours of November 9, membership shot up almost instantly, earning the group write-ups in publications ranging from Vox to Rolling Stone.

Yet despite DSA’s heightened profile, there were no big-name speakers or cocktail parties aimed at courting big donors at the convention—a near inverse of the Democratic National Convention’s pomp and circumstance last summer. The bulk of the agenda was devoted instead to deciding the group’s leadership, structure, and political priorities. This was accomplished via hours-long, Robert’s Rules-structured discussions between well over 700 elected delegates from around the country, who voted on scores of motions and resolutions drafted in the last months. Punctuating debates were caucus meetings and regional break-outs, plus meetings and parties outside the convention schedule.

“I woke up at 6 AM this morning and didn’t go to bed until 2 AM,” said Cathy Garcia, a delegate from DSA Santa Fe with a background in the labor movement. “And I feel pumped. I have only had one cup of coffee, because it’s not the coffee that is energizing me right now.”

Garcia joined in December after feeling frustrated with other leftist groups, which she said “weren’t like my union. It was just a lot of talking and having great ideas, believing things that I believe. But belief isn’t enough for me. You can’t just have a good idea. You have to execute that idea and make it viable. You have to mobilize. You have to organize.” Garcia added, “Reading a newspaper does not put people more money in people’s pockets.”

Veterans of the organization have been blown away by the enthusiasm now coursing through DSA. “What I see here is this real hunger for democracy,” Maxine Phillips told me. “People feel like their choices and their opinions weren’t paid any attention to in the election.” Phillips has been involved with DSA in one way or another for 40 years, first as DSOC staff, then as DSA’s national director, then as an editor of Dissent, a publication with deep ties to the organization. She retired from the magazine in 2013, and now edits the DSA newsletter, “Democratic Left.”

Phillips noted that the group experienced a steep decline in the Reagan years, leading many to question its future. “My feeling was that we were keeping the flame here, and when the time comes again we would be there. Now it’s set up to take in new people and to take advantage of the energy,” she told the New Republic.

Phillips says there’s “a lot more distrust” of the Democratic Party now than when she first got involved. Even so, votes this weekend showed a sense of pragmatism when it came to approaching a party that has enjoyed a near-hegemony over liberal politics in this country.

Chicago City Councilman Carlos Ramirez-Rosa—one of DSA’s few elected officials—advised an ecumenical approach to party politics. “The Democratic Party is not a monolith. It’s a label,” Ramirez-Rosa, 28, told the crowd at a side event Thursday night. “It’s not a membership organization like the DSA. It is a label that under state and local law has been given preference in getting access to ballot lines. It is also the preferred ballot line of a vast majority of people that prefer things like single payer and a fifteen dollar minimum wage.”

Delegates, meanwhile, resolved to prioritize putting electoral resources into bids for office by DSA activists and open socialists. A measure that would have seen DSA try to draft Sanders into a third-party presidential run was defeated handily, as was another to transform DSA into a political party and break formally with the Democrats. DSA’s priority now appears to be winning elections that can advance socialism, using whatever ballot lines will make victory the most likely.

Another priority for DSA is broadening its membership. Though eager to expand the gender and racial diversity of DSA, members are quick to reject the media narrative that 21st century socialism is a white man’s (or Bernie Bro’s) game. “That’s a narrative that is crafted by folks that don’t really know DSA,” Garcia told me. “If that’s what they see it’s because they’re choosing to see it and choosing to ignore someone like me, who is out here front and center in elected leadership. I don’t like being dismissed as a token.”

Still, few organizers hold illusions about either the current demographic realities of DSA or the historic disconnect between the white left—of which DSA has long been a part—and communities of color. Bianca Cunningham, chair of New York City’s DSA labor branch, joined DSA two years ago, and at the time was one of very few people of color in the organization. When membership spiked post-election, she noticed that the group was attracting an inordinate number of new recruits fitting a certain profile: white, male, and downwardly mobile.

“People were coming into the meetings and expressing discomfort about being in white-only spaces,” Cunningham noted. In response, she started convening regular Afro-socialist happy hours for both DSA members and other leftists of color in New York. “They grew and got really popular,” she told me. “People say that it’s made the difference as to whether they stay in DSA.”

Thus emerged the motion to form a national Afro-socialist caucus, an attempt to systematize the more informal structure established in New York. It would set aside national space and resources for people of color in DSA to plan how the organization approaches a wide range of racial justice work. The same motion also voiced strong support for reparations—as outlined in the Black Youth Project 100’s Agenda To Build Black Futures—and passed without controversy.

Like nearly everyone else I spoke with, Cunningham saw maintaining momentum as the biggest challenge for the organization moving forward. If the mantra that all politics is local is to be believed, then it is especially true under the Trump administration. Hope for transformative change at the federal level has been all but forsaken until 2018 or later. Campaigns for DSA and the left more generally—and the very hope of keeping hope alive—will shift increasingly to states and cities.

Given DSA’s modest size, it might also be the level at which the group is best suited to contest for power. Indeed, it already has, with the election of the DSA-backed candidate khalid kamau in South Fulton, Georgia, and ongoing campaigns in Seattle, New York City, and Minneapolis.

Whether future DSA-backed candidates run as Democrats or not, the group’s most recent convention shows that the divide between Democratic Party leadership and those to their left is about much more than the policies and ideologies each camp supports. DSA was able to absorb so many disaffected Democrats after November for a simple reason: It’s more directly democratic.

Millennials especially, who now make up a majority of DSA’s membership, might have fewer experiences with direct democracy than any other American generation in recent memory. Unions have been decimated, meaning today’s young people are far less likely than their parents to have participated in union elections or passed resolutions through their locals or internationals. As a result of labor’s decline, workplaces themselves are less democratic, too. The Democratic Party, meanwhile, has in many cases handed the keys for steering strategy and policy over to political consultants and corporate donors. Congress is notoriously dysfunctional, and regressive state governments are making it harder for voters to get to the polls.

Having come of age in the wreckage of the financial crisis, millennials’ drift toward socialist politics makes sense. That they’re hungry to experience a responsive, democratic process should come as no surprise, either.

“The trouble with Socialism,” Oscar Wilde once joked, “is that it takes too many evenings.” For DSA members, that may not be a bad thing.