Even when sensible adults finally take back government, “back to normal” is not what we want. 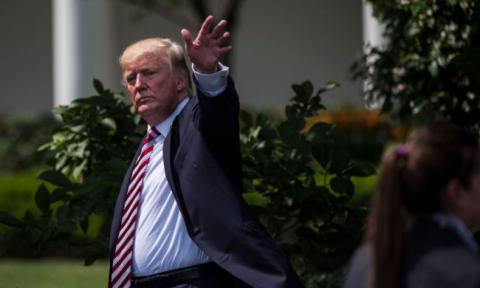 Now seems like a good time to talk about life after Trump.

Trump’s éminence grise Steve Bannon was given the boot on Friday—or resigned, if you believe him—and it’s tempting to celebrate this excision of a particularly nasty wart from the body politic.

Well, yes, let’s celebrate a little. We may soon see more departures—Bannon allies, perhaps—and if the top job continues to be unrewarding and hard, we may soon see 45 himself rage-quit the Oval Office so he can go back to his previously idyllic existence of golf, tweeting at the TV, and putting his name on large buildings.

Here’s the thing: Former President Trump will have been just a very ugly symptom of a condition that’s been ravaging the United States for decades, including the growing stratification of the U.S. economy, hollowing-out of the middle class, and an intensifying white-centered culture that few leaders seem to want to get serious about rectifying.

When Trump goes—and he will, whether it’s next month or next year, or in 2020, or whenever his steaks and extra scoops of ice cream get the better of his blood-brain barrier—most of the nation will heave a collective sigh of relief, and there will be a very strong urge (especially in the national media) to declare, “Now we can go back to normal and forget this ever happened.”

That can’t happen. Not least because, if Trump’s exit is facilitated by impeachment, we’ll likely be stuck with President Mike Pence, another small-minded ideologue who, odds are, is more competent than Trump.

But even if sensible adults take the wheel, back to normal is not what we want. We still live with the original afflictions that allowed a snake-oil salesman to ride into town, hijack a major political party, and turn it and the country into a vehicle for self-promotion and profit.

Trump’s faux-populism hid the fact that his “solutions” are garbage.

During his campaign, Trump exploited anxieties over some very real endemic problems facing America: Our national infrastructure is crumbling around us, and has been for years. Millions of formerly well-paying careers in manufacturing are being lost, and replaced—when they are replaced at all—with minimum wage service-sector jobs. Increasing global trade has enriched those same CEOs and other corporate bigwigs that are raking in insane amounts of money at a time when the other 99 percent of us are dealing with stagnant wages and skyrocketing medical care costs. Illegal immigration is indeed a problem, especially for those who are victims of trafficking or abusive working conditions, and have no path to becominadvg legal residents.

The problems are there—Sen. Bernie Sanders pointed them out, too—though Trump’s faux-populism hid the fact that his “solutions” are garbage. He had no real intention of trying to solve those problems anyway.

The very people charged with reversing those trends are sitting in Congress, firmly under the thumb of big money and so politically polarized that they can’t even agree what government should be spending money on, much less how much and who should benefit most.

The swamp really does need to be drained. It’s just unfortunate that Trump’s supporters believed he’d be the one to do it.

Real solutions aren’t easy, of course. A serious effort to rebuild the national infrastructure will require a significant number of Republicans to admit that some government spending is a good thing. It will be a long-term, complicated process to restore decent jobs, especially for those those who have been displaced by automation, deindustrialization, and policies that favor cheap overseas labor.

The hard part is building a foundation that will be there to support a new kind of economy.

Our unfettered capitalism has redistributed the national wealth into the hands of a very few and forced the rest of us to fight over the dwindling leftovers. The Koch brothers and their ilk would love for us to turn on each other along racial lines, because as long as we’re fighting each other, we’re distracted from their pillaging and won’t go after them. They only call it class war when we start to fight back, as the saying goes.

Resisting the divisiveness and cynical opportunism coming out of the White House is the easy part. The hard part is building a foundation that will be there to support a new kind of economy once Trump’s era is an ugly memory.

Yet in many ways, we’re doing just that. California Gov. Jerry Brown became de facto U.S. environmental leader once Trump clearly abdicated that role. In December, Will Stelle, the former Northwest Regional Administrator for NOAA Fisheries, spoke frankly to a group of climate scientists, advising them to keep doing their own good work and not wait for the federal government to take the lead. We’re seeing growing support for establishing a basic income program and renewed calls for universal health care. Communities are fighting to protect their immigrant populations. They’re figuring out how to keep providing services without the help of the federal government, or if they make good on threats to cut off funding.

Across the U.S., people seem to recognize that their fates largely rest with one another. So while the Trump administration continues its now seven-month implosion as it attempts to undermine civil society, it’s worth remembering the problems we had when he arrived will still be there for us once he’s gone. The Post-Trump Era is coming, and there’s work to be done.

Chris Winters is a senior editor at YES! Magazine. He covers economics and politics. Producing in-depth, thoughtful journalism for a better world is expensive – but supporting us isn’t. If you value ad-free independent journalism, consider subscribing to YES! today.