Why was this Chicago-based group defunded by the Countering Violent Extremism task force? 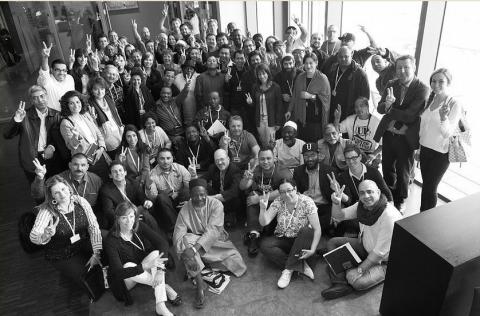 In the wake of the violence in Charlottesville, scrutiny has been placed on the concept of domestic terrorism. One group, Chicago-based Life After Hate, has been garnering a lot of attention. Quartz, The Huffington Post, The Intercept and Reveal News have all covered the group, which was founded by ex-supremacists to convert those currently embroiled in hate. Even Samantha Bee has become a staunch advocate.

Why? Because the Department of Homeland Security revoked a $400,000 grant to the group that was made in the waning days of the Obama administration by the Countering Violent Extremism task force. In our While He Was Tweeting Series, we’ve documented many instances of government programs ostensibly having been canceled or left to wither on the vine, with the excuse of consolidation or cost cutting. But Life After Hate is different. It was the only grantee that focused exclusively on fighting white supremacy.

News outlets have doggedly tried to find out just why Life After Hate was singled out. Some DHS spokespeople maintain that because the group doesn’t work directly with law enforcement, they are reluctant to fund it. But a more popular theory, also backed by insider information, puts it down to the influence of controversial national security adviser Katharine Gorka. She is the wife of insider Sebastian Gorka, who memorably told Breitbart News Daily that white supremacists are not the problem.

Katharine Gorka has long been a diehard foe of “Islamic extremism” — often criticizing the Obama administration’s reluctance to use the term. Insiders say that the decision came down after Gorka had numerous meetings with DHS personnel aimed at redirecting the Countering Violent Extremism programs toward Muslim extremism only. Life After Hate itself has been given several reasons for the termination. Unnamed sources, no longer with the DHS, have blamed the outspoken anti-Trump stance of one of the founders, and another again put it all down to Mrs. Gorka. The group itself, despite persistent requests, has gotten no official response from either the DHS or the task force.

The defunding comes at a time when the violence in Charlottesville and protests around the nation have people on edge. And that’s not all. Foreign Policy just reported:

The FBI and the Department of Homeland Security in May warned that white supremacist groups had already carried out more attacks than any other domestic extremist group over the past 16 years and were likely to carry out more attacks over the next year, according to an intelligence bulletin obtained by Foreign Policy… [and they] likely will continue to pose a threat of lethal violence over the next year.”

Last week on Facebook we asked for your reactions to an op-ed piece in The New York Times, and about how you would deal with extremism in your world. Many others have been asking the same question. The Atlantic just debated whether it was OK to “doxx” a Nazi. We turned to Angela King, deputy director and co-founder of Life After Hate, for some ideas from the group’s playbook, which opposes online shaming and physical fights. This interview has been lightly edited for clarity and length.

Kristin Miller: How hard was it for you to get out of the movement?

Angela King: The first time that I stopped to reconsider my life and my beliefs and what I was willing to do in the name of those beliefs was the Oklahoma City bombing. I made a really halfhearted decision to get out. I soon received a few subtle indications that trying to do that wasn’t acceptable. One day, I found the entire front of my building just completely dotted up with bullet holes. Another subtle threat was a phone call I got from one of my supposed friends that let me know that he had just seen my younger brother, who is almost 11 years younger than me, playing in front of my mom’s house all by himself.

Still, at that point, I didn’t have the confidence to leave. I was scared because of those things. I lacked resources, and to be absolutely honest, I still very much felt the need to belong somewhere. So ultimately, I did not leave at that time. What started the disengagement for me was when I went to federal prison.

KM: Do you think if you’d had some sort of mentor, like you provide now, you would have been able to get out much earlier?

AK: Absolutely. I’m oftentimes asked the question, “What would have changed you when you were involved?” And my answer is always the same. I was one of the young people that thought I knew everything I needed to know about life. There was nothing, I thought, that anyone could possibly share with me that would change my feelings, because I felt misunderstood and disenfranchised. If anybody tried to approach me, I didn’t think they were credible, because they had none of the experiences that I was having. So honestly, I think it would have taken somebody like myself or one of my colleagues, who wouldn’t necessarily judge me but would listen to my grievances or my perceived grievances, and who would just open themselves up in a vulnerable way to share their own experience. I really with all of my heart believe that that’s the one thing that I wouldn’t have been able to deny in any way.

KM: Now do you mostly do in-person outreach, public speaking or are you using the internet a lot?

AK: All of the above. We are registered in the state of Illinois; our team is spread out geographically; and all of us travel to do speaking, outreach, attend conferences — anything applicable to radicalization, de-radicalization. Me, personally, I started doing speaking and outreach the year that I was released from prison, which was 2001. I speak to thousands of high school students every year. I’ve worked with a place called the Holocaust Documentation and Education Center located in South Florida for about 14 years. Some of my colleagues also travel and speak. For instance, our executive director, Sammy Rangel, he goes into prisons. He does a lot of reentry type of work.

We also do a lot of our work online, like the ExitUSA program. We were actually really inspired by the model that Exit Sweden uses, because they help individuals to disengage but also prepare them to do the same thing and to become mentors, if they’re comfortable with that. That has been a really good approach for us, as it helps to get a narrative out, and it helps the individual to make amends and to begin to heal from the damage done to themselves and to others. There’s also one in Germany called Exit Deutschland.

KM: I noticed that you have strategies that oppose online shaming and physical fights. Many of our readers are looking for a way to fight hate but maybe not put themselves personally on the line.

AK: Absolutely. In fact, I just published something on our Facebook page, because we have received a lot of requests from individuals who want to stand up and speak out, but they do not want to be engaged in violence, they do not want to aggravate the situation at all. It’s fairly simple stuff. We let people know what we were trying to accomplish when we were involved. Obviously, the kind of horrific rhetoric that is used, of course it makes people angry. Of course it makes people passionately angry, given the Holocaust and the way we’ve seen steps of dehumanization play out and lead up to genocide.

We try to let people know that — and this is a hard one — most of the people who become involved in those groups do not become involved because they wake up one day and say, “I hate everyone.” -- Angela King

We try to let people know that — and this is a hard one — most of the people who become involved in those groups do not become involved because they wake up one day and say, “I hate everyone.” There’s starting to be some academic research elucidating the idea that there are nonideological precursors to becoming involved in violent extremism. They are things like trauma, abuse. Take the case of Dylann Roof. He did not become involved in the violent far right in person. He was completely radicalized online. And he was socially awkward, he was bullied, he didn’t fit in, and the internet and technology took him down a rabbit hole, and we see where that rabbit hole led him.

We really try to let people know that the more attention the violent far right gets, the more it will embolden them. It will make them feel like, “Hey, people are listening to us and we’re getting our message out.” So we offer tips like don’t argue, don’t waste your breath arguing with someone about the ideology, because you’re never going to argue your way into changing the individual. One of our co-founders recently said, “I never once ducked a bottle in a protest and thought, ‘Whoa, I better rethink my beliefs here.’”

I don’t think the huge leap in hate crimes has gone unnoticed by very many Americans right now. We are trying to replicate something that worked really well in Germany in helping raise money for the Exit program. Communities will do fundraising when violent far-right extremists protest or do marches. Essentially, they’ll create a platform and have people pledge, for every Nazi there, I’ll donate $20, or for every mile a Nazi walks, I’ll donate X amount. In the past week, since the events in Charleston, we’ve had numerous communities and individuals contact us and say, “We’re doing this, and when we get the funding, we’re donating it to you.”

Find out more about Life After Hate and Exit USA. Or follow Amal and George Clooney’s path and support The Southern Poverty Law Center or share their “Ten Ways to Fight Hate Groups” publication.