California Calls: An Alliance to Renew the Dream

Pushing Back and Pushing Forward in the First Six Months of the Trump Era. 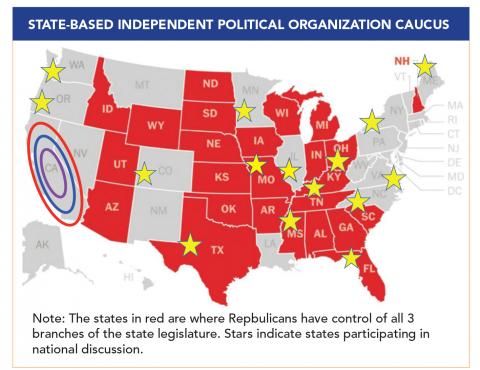 Fueled by outrage, disbelief and a conviction for justice, California Calls’ anchor organizations, grassroots leaders and statewide allies are pushing back on the multitude of attacks at the federal level, and pushing forward local and state solutions that model our vision of democracy, inclusion and social justice.

The demonstration of hate and violence by white supremacists in Charlottesville this weekend only underscores the urgency of what’s at stake – the soul of our democracy.

California is America, only sooner. After years of local community organizing, people-to-people outreach and day-to-day education about the key issues facing our state and country, Californians are coming together to protect the environment, advance criminal justice reforms, protect immigrants, and fight for the health of all. Our beliefs are rooted in the core values of equality and fairness, but are only expressed so powerfully because of the patient, steady grassroots and electoral organizing of the last many years.

California has national significance in this movement moment. We can model how to protect and defend against the attacks at the national level, advance long-term power building strategies, scale local power and victories to state power and impact, and replicate lessons across states to build towards national change.

This moment requires us all to stand up and take action for justice and inclusion. Key to regaining the terrain and reclaiming our democracy is the hard work of building power from the bottom up. Read on to learn how California Calls, our anchor organizations and allies are building the power needed to take our country forward.

Growing Momentum and Urgency to Make It Fair: Close the Loophole and Invest in Local Communities

The Trump Administration’s plan to cut $2 trillion in taxes for the wealthy and multi-national corporations, vastly increase the military budget, and slash safety net, housing assistance and even Meals on Wheels is frightening and unconscionable. These “Robin-Hood-in-Reverse” policies—along with the ongoing efforts to dismantle the ACA—will present California with a massive deficit challenge.

The “Make It Fair” campaign to reform Prop 13’s commercial property tax provisions has new urgency and is gaining momentum:

With over 25 organizations on the Make It Fair steering committee—including the ACLU, the League of Women Voters, the California Teachers Association, Service Employees International Union, California Calls, PICO, Courage Campaign, Housing California, PolicyLink and California Professional Firefighters, and over 250 organizational endorsers—we are pushing hard to build enough public support and pave the path to the ballot:

The time is now to MAKE IT FAIR. Click here to join the campaign.

Pushing Back: Using Voter Power to Resist the Trump Agenda

The large-scale, sophisticated voter engagement systems we have built over the last 8 years reached a new level of impact in California in the November 2016 election—mobilizing over 282,000 young voters, immigrants, Latinos and African-Americans, and new and infrequent voters in low-income communities. Our total voter base has now grown to over 715,000 people who support progressive tax and fiscal reforms, and social equity in California.

This work has resulted in underrepresented voters playing a critical role in changing the California electorate. In November 2016—in sharp contrast to the disastrous national election results—California voters gave strong approval to ballot measures which will now provide new revenues for K-12 schools (Prop 55), health care (Prop 56)—and begin to shift the state away from incarceration, and towards prevention and treatment (Prop. 57).

Alongside our statewide allies in the “Fight4OurHealth” Coalition, in January, California Calls dove into the battle to protect the Affordable Care Act which has expanded health coverage for over 5 million Californians. Our anchors lit up the phone lines and knocked on doors, contacting 40,000 voters and generating nearly 4,000 patch-through calls and letters to legislators urging them to protect the Affordable Care Act. Despite having all 14 of California’s Republican Representatives vote yes on the House version of a replacement, the huge fight back waged by “Fight4OurHealth” has paid off, with the Republican Senate still unable to win a decisive vote.

Immediately after the reports of increased immigrant raids across the state, California Calls mobilized our anchors to urge state lawmakers to pass the California Values Act (SB54) and prevent our public resources from fueling Trump’s hateful deportation machine. Through phone banks, door-to-door outreach, and digital organizing, California Calls leveraged its voter engagement power joining the ICE Out of California Coalition’s campaign to make California a Sanctuary State. We contacted 9,000 voters and generated over 2,500 patch through calls and letters to state representatives to express support of SB54. This pressure has been critical in countering the active opposition of the California Sheriffs’ Association, who is collaborating with ICE to weaken or kill the bill. SB54 has passed the State Senate and three Assembly Committees, and will move to a full vote of the Assembly later this summer.

Towards a National Strategy: Building Independent State Based Power

While the spirit of resistance is strong, inspiring, and seemingly more widespread than any we have seen in recent decades, we know that resistance alone is insufficient to reverse the grave threats we face as a nation.Our movement’s responses have largely been about registering opposition to Trump, and slowing down or mitigating his agenda. Many continue to pursue a one-dimensional view of political power: the election of progressive candidates. Without a focus on sustained, day-to-day, bottom-up organizing, this approach is insufficient to match the forces now in power.

Our movement’s responses have largely been about registering opposition to Trump, and slowing down or mitigating his agenda. Many continue to pursue a one-dimensional view of political power: the election of progressive candidates. Without a focus on sustained, day-to-day, bottom-up organizing, this approach is insufficient to match the forces now in power.

Pushing back on the attacks at the federal level is critical, but we must also push forward through offensive battles that reflect our progressive values. Where we can move from defense to offense is at the local and state level. And, key to an effective national strategy is organized, grassroots organizing for state power.

California Calls has been a leader in the launch of a new caucus of state-based networks and movement leaders to share lessons and explore new strategies to expand independent political power centered in states as the building blocks to a national strategy.

Our goal is to develop a clear and collective understanding of what statewide governing power might look like and how it can be built, articulate an alternative vision to the Trump agenda and the dominant narrative of our time and strategize about how to influence the national landscape towards a strategic long-term state-based power building approach.

California Calls is a growing alliance of 31 grassroots, community-based organizations spanning urban, rural and suburban counties across the state. We engage, educate and motivate new and infrequent voters among young people, from communities of color, and from poor and working class neighborhoods to make California’s electorate reflect our state’s diverse population. Through our bottom-up approach, we are organizing voters most impacted by budget cuts and deteriorating public services in support of systemic, progressive solutions to our state’s fiscal crisis. Working together, and including those who are often left out of policy decisions, we believe we can reclaim the California Dream of equality, opportunity and prosperity for all Californians. The strategy of California Calls has always been about engaging communities to make California a better place for everyone who lives here. We are uniting our voices into a statewide alliance of neighborhood-based community organizations with the power to put forward and implement progressive policy solutions that will achieve our four strategic goals:

FUND PUBLIC SERVICES: Guarantee secure, sufficient and stable funding for public services that will benefit all Californians, particularly those who need it the most—poor, working class, and middle class communities of color.

GOOD GOVERNMENT: Improve the effectiveness of our government so that it meets the needs of our communities.

FAIR TAXES: Reform the tax system for greater equity where everyone pays what they can afford to pay, and not more or less.

ECONOMIC GROWTH: Invest in our future and encourage the development of good paying jobs that give back to our communities.