Leaked emails show that white terrorist groups planned violence in advance of August 12 in Charlottesville. They planned on inciting racial violence and hatred. They even planned on driving motor vehicles into the crowd demonstrating against hatred and white nationalism. Where are the federal indictments of these white terrorists for conspiracy to commit murder, conspiracy to incite racial violence and hatred. Where are the indictments of the leaders and organizers? 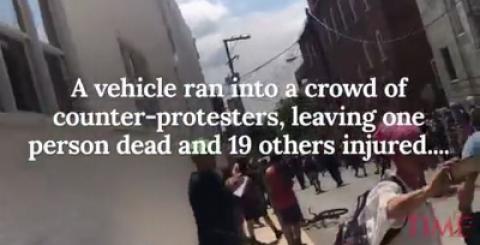 Well before a white nationalist “Unite the Right” demonstration turned deadly in Charlottesville this month, attendees were planning for violence, according to leaked online chats. In private chat channels, they shared advice on weaponry and tactics, including repeatedly broaching the idea of driving vehicles through opposition crowds. After the vehicular attack which killed counterprotestor Heather Heyer, users of the channel celebrated the event.

The discussions took place on a private channel created using Discord, a service primarily intended for gamers. Hundreds of screenshots of the exchanges were released this week by Unicorn Riot, a left-wing activist group, which said they were shared by an anonymous source. The records also included audio recordings of planning meetings.

While much of the discussion centered on flags, chants, and other forms of speech, the leaked exchanges also included advice on weapon construction. “You want something designed for longitudinal stress,” wrote one poster. “[Three] whacks and that thing is breaking.” Other topics included body armor and shield design. 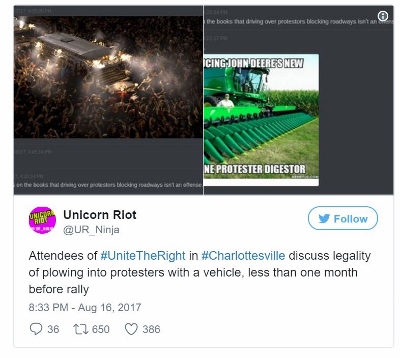 There’s no indication that James Alex Fields, the driver of the car that killed Heyer and injured more than a dozen others, was part of the Discord discussion, but his act was celebrated and defended by users, including some who edited images of the carnage into memes that were intended to be humorous.

The records could also have implications for future efforts to organize white supremacist events. While the First Amendment protects the right to speech and assembly for even the most heinous groups and ideas, it does not protect speech if it calls for and is likely to lead to “imminent lawless action.” According to legal experts speaking to Wired, signs of “preparation for illegal activity” could make it more likely that future events organized by related groups could be legally restricted.