A new documentary by Rewire chronicles the rising tide of harassment and violence against abortion providers and clinics under the Trump administration. Called "Care in Chaos," it features Calla Hales, director of A Preferred Women’s Health Center, one of the busiest abortion clinics in North Carolina. She faces a gauntlet of harassment, threats and physical violence just to do her job. 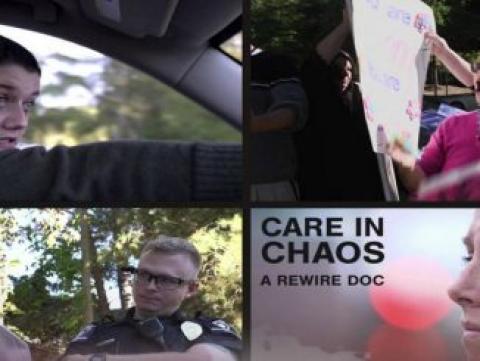 GUEST: Jessica Mason Pieklo, Legal analyst and vice president of law and the courts at Rewire.

AMY GOODMAN: Jessica, I wanted to turn to a new documentary by your news organization, Rewire, that chronicles the rising tide of harassment and violence against abortion providers and clinics under the Trump administration. This is a clip from Care in Chaos, which features abortion clinic administrator Calla Hales in North Carolina.

CALLA HALES: I try not to focus on the history of assassinations of doctors and attacks on doctors and clinic workers in the past. If I focused on that every day, I wouldn’t get out of bed. And I have to keep moving forward. This clinic has to stay open.

CALLA HALES: It really does upset a lot of patients to be able to hear people yelling and screaming and calling them names on amplification, while you’re in the back of a building that’s 200 feet away and there’s layers of concrete and wood between you.

AMY GOODMAN: That was Calla Hales, the lead administrator at A Preferred Women’s Health Center—that’s the name of it—in North Carolina. It operates four abortion clinics across North Carolina and Georgia. She’s featured in the new Rewiredocumentary Care in Chaos, that’s directed by Lindsay Beyerstein and Martyna Starosta. Jessica Pieklo, can you talk about why this documentary was made? It talks about the clinics in North Carolina, in Fargo, North Dakota, as well.

JESSICA MASON PIEKLO: Sure. So, I think this is a really important film for several reasons. First, we decided to make the documentary because while there’s a lot of talk about legislative attacks on abortion rights, specifically at the state level, there’s not a lot of focus and a lot of attention drawn to the attacks on access at the front door. And so that is one goal of the film.

Another goal of the film is to show the critical importance in buy-in of local law enforcement in terms of protecting and facilitating a patient’s rights to access the constitutional right to terminate a pregnancy when they need to, as well as the rights and safety of the doctors and staff and companions that are working with these patients. And I think the documentary does a really good job of contrasting these two.

The protests in Charlotte are out of control. You have hundreds of people descending on a clinic that is, in Charlotte, sort of off a rural road. It’s not easy to get to. They set up fake ultrasound clinics. They approach people at their doors of the cars and talk to them, walk right through. They are on amplification systems that go all the way through into the clinics, so that patients who are in counseling rooms and in the process of procedures can hear the shouting. They can hear people calling them terrible names, calling them "killers," asking them to please reconsider and wait for Mother’s Day. And these are not the plump grandmothers that the Supreme Court talked about when it struck down the Massachusetts buffer zone law a couple years ago. These are extremely agitated, the most extreme wing of the anti-abortion, anti-choice movement. These are people whose singular goal is to recriminalize abortion, and also have zero problem jailing women and providers who do terminate pregnancies. We’ve seen those prosecutions. They are ongoing.

And so, I think that when you contrast Charlotte with then Fargo, for example, where you have a law enforcement officer who is absolutely neutral, is objective in the way that she carries out her jobs, very literally as an officer of the peace—and so, what you have is a very different situation outside of the clinic in Fargo. You have protesters, for sure, but you don’t have the kind of amplification systems. You don’t have the kind of shouting. You don’t have the throngs and throngs and throngs that the film shows in Charlotte. What you have is a cooperative relationship, a relationship where law enforcement makes sure that protest rights are protected and that the constitutional right to privacy in abortion is protected, as well