The votes by members of the Maine State Employees Association and the American Federal of State, County and Municipal Employees are a victory for Republican Gov. Paul LePage. 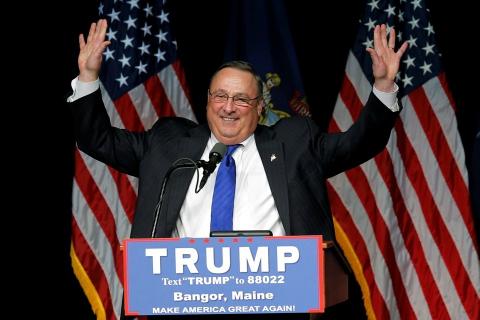 Governor Paul LePage introduces Donald Trump at a rally in Bangor, Maine, in June., Brian Snyder / Reuters
Two of the largest unions for state workers voted to ratify new two-year contracts Wednesday that increase wages by 6 percent while giving Gov. Paul LePage a long-sought victory in his effort to eliminate mandatory union fees for state workers.
Members of the Maine State Employees Association, Local 1989, and the American Federation of State, County and Municipal Employees union approved contracts that eliminate a requirement that all state workers pay fees to the union, even if they choose not to become members. The unions collect the fees to cover the cost of collective bargaining and other services, including lobbying the Legislature.
Workers will still be allowed to join the unions and pay voluntary union dues.
The elimination of the service fee is effective in January, and the two 3 percent pay raises occur in January 2018 and January 2019, said David Heidrich, a spokesman for the Department of Administration and Financial Services.
MSEA-SEIU Local 1989 contract negotiators accepted the change in support of the pay increase in August, but negotiators for AFSCME rejected the proposal, recommending instead accepting only a 1 percent raise. But the 900 or so members of AFSCME rejected the negotiators’ contract and voted to ratify LePage’s offer, giving them the 6 percent wage increase while eliminating the mandatory fees for nonunion members.
‘STRONGER AND MORE UNIFIED’
The MSEA represents about 9,500 workers, divided into nearly a dozen bargaining units, each with its own contract in the executive, judicial and legislative branches. The contracts approved by workers Wednesday affect those in the executive branch of government, including the Department of Corrections and mental health workers at Dorothea Dix and Riverview psychiatric centers in Bangor and Augusta, respectively.
Ramona Welton, the president of MSEA-SEIU Local 1989, said the concessions on mandatory fees were necessary to get better wages for workers.
“The new contracts provide our members with meaningful, long overdue and well-deserved raises and avoid many of the nasty and unwarranted take-backs that this administration sought,” Welton said in a prepared statement. “The service fee will be eliminated on Jan. 1, 2018, a change this administration pursued in the hopes of weakening our union. This will necessitate some changes to our structure, but we are confident that we can continue to provide high quality representation for our members at the Legislature, in grievances and arbitrations, and at the bargaining table.”
Welton said the union continued, “to be frustrated with the unreasonable and ideological demands of (the LePage administration).” But she said she believed the union has “emerged stronger and more united” as a result.
NO BEARING ON STATE LAW
Jim Durkin, a spokesman for AFSCME in the union’s Boston office, could not be reached for comment.
The agreement does not apply to all of the bargaining units MSEA represents – employees in the state court system, for example, are not included – but it does cover the largest block of its members, who work under four contracts in the executive branch.
The agreements are a victory for LePage, who has made repeated efforts to change the state law that enables unions, including those in the private sector, to collect fees from nonmembers. In 2015, the Legislature rejected a LePage-backed bill that would have repealed parts of the law and made Maine the 29th state to have what union critics call “right-to-work” laws. The Legislature also rejected a similar bill during the session that ended this month.
The contracts approved Wednesday have no bearing on the state law on union fee assessments.
Nonetheless, the results could provide leverage in the Legislature to help sway lawmakers to LePage’s side on the matter.
“As I mentioned previously, the reason for our proposal is a simple one,” Heidrich said. “The LePage administration does not believe public servants should be forced to have a service fee deducted from their pay. The implementation of ‘fair share’ during the Baldacci administration was and remains poor public policy that penalizes nonmember employees and acts as an unnecessary hindrance to our recruitment and retention efforts.”