Pro-worker provisions introduced by Sen. Charles Schumer added to the bill include penalizing employers for interfering in union elections. 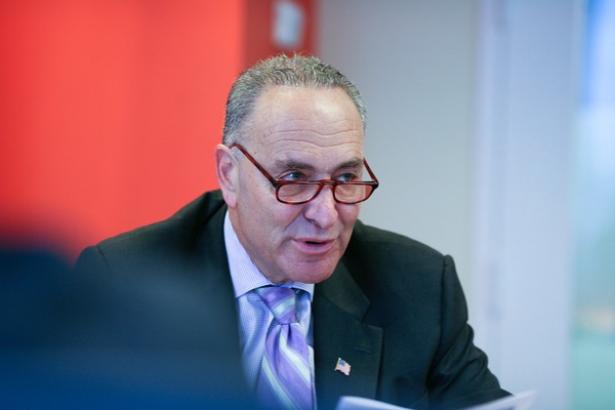 Senate Democrats are forging ahead with budgetary plans to create tax incentives for union membership and penalties for employers that violate workers’ union rights, according to three sources involved in the process.

The broad language is designed to cover a tax credit or deduction on union dues, which would provide a financial sweetener for members, and the creation of civil monetary penalties that punish companies for interfering in workers’ rights to organize and collectively bargain under the National Labor Relations Act, said sources from Congress, the administration, and labor who were all involved in the negotiations.

These provisions, along with several other potential reforms aimed at revitalizing the labor movement, face significant congressional hurdles. But their inclusion in Senate leadership’s framework shows how Democrats are strategizing to use a go-it-alone legislative procedure to combat decades of declines in union membership.

The details are subject to change and eventually must be approved by the Senate parliamentarian, who ensures that elements of the legislation all pertain to budgetary matters. Schumer’s aim in sending the memo Monday was to inform Senate Democrats of what the budget bill is intended to fund, but he acknowledged that it may be modified over time as committees write the legislation.

The effort to include a tax incentive for union members would mark a “small but important complement” to comprehensive labor law reform, wrote the left-leaning Center for American Progress in a 2019 paper.

Before they were eliminated in Republicans’ sweeping 2017 tax law, employees had the right in limited circumstances to deduct the costs of union dues in their tax filings. Depending on the outcome of Senate talks, the budget measure would aim to at least reinstate that previous deduction, which wasn’t available to workers choosing the standard deduction, but could instead strengthen it as a refundable tax credit.

The Senate is expected to vote later this week on the budget blueprint, which sets out spending levels and would allow committees to go about crafting policy text for the reconciliation bill.

Union advocates for years have made civil penalties for labor violations a top priority; the idea was included in the Protecting the Right to Organize Act, or PRO Act, that the House passed in March. With the bill stalled in the divided Senate, Democrats are looking to include certain elements in the budget legislation.

Under current law, if an employer gets caught illegally threatening workers for organizing, for example, the National Labor Relations Board might order them to stop and put up government-sanctioned posters informing workers of their rights. But the board can’t issue fines to punish the employer and deter future violations.

The penalties provision is viewed as having the best chance at clearing the Senate parliamentarian. The money from the proposed fines would go to the NLRB, a direct tie to the federal budget.

Democrats have discussed other worker-focused changes to the budget reconciliation bill, such as making it harder for employers to deprive workers of union rights by classifying them as independent contractors instead of employees, as well as offering support for striking workers. Those measures are still subject to negotiation, sources said, though they’re seen as having a less obvious tie to the budget.

Democrats also are intent on providing a funding boost for labor enforcement agencies, but exactly how much and to which subagencies remains unclear.

Sen. Ron Wyden (D-Ore.), who chairs the Finance Committee—which has jurisdiction over tax filing changes for union members—declined through a spokesperson to comment on specifics. A spokeswoman for Sen. Patty Murray (D-Wash.), chair of the Health, Education, Labor, and Pensions Committee that has authority over the labor penalties language, didn’t respond to a request for comment.