GOP courts blue collar voters but most favor anti-union ‘right to work’ laws and reject laws that would protect right to organize. 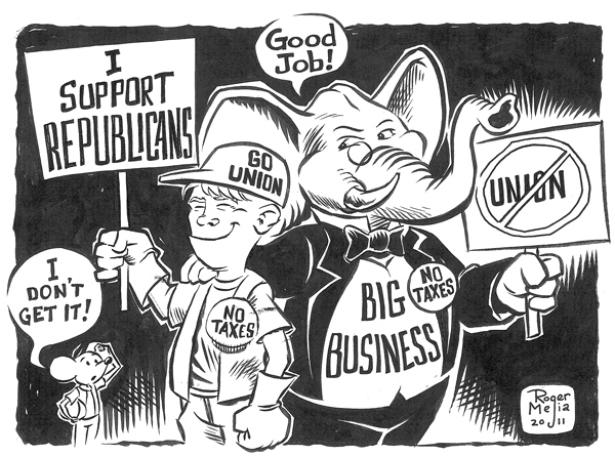 After years of struggle, America’s labor unions enjoy greater public approval than at any time in more than 50 years. Yet even as the Republican party seeks to rebrand itself as the party of the working class, its lawmakers, by and large, remain as hostile as ever toward organized labor. It doesn’t look like that situation is about to change.

With the midterm elections approaching, and many polls indicating that the Republicans will win control of the House, nearly all Republican lawmakers in Congress oppose proposals that would make it easier to unionize. One hundred and eleven Republican House members and 21 senators are co-sponsoring a bill that would weaken unions by letting workers in all 50 states opt out of paying any fees to the unions that represent them. And at a time when many young workers – among them, Starbucks workers, Apple store workers, museum workers, grad students – are flocking into unions, Republican lawmakers often deride unions as woke, leftwing and obsolete.

Congressional Democrats – seeing the surge in unionization drives along with the aggressive anti-union campaigns by Starbucks, Amazon and other companies – say there is increased urgency to enact the Protecting the Right to Organize Act (Pro Act), which would make it easier for workers to unionize. The Pro Act passed the House last year – with 205 Republicans voting against and five in favor – but it faces an uphill battle in the Senate, largely because of a GOP filibuster, and will almost certainly fail to pass if Republicans gain Senate seats in the midterms.

The Pro Act remains the Democrats’ overwhelming legislative priority for helping unions – it would, among other things, ban employers’ captive audience meetings and create substantial penalties for corporations that break the law when fighting unionization. Republicans denounce the legislation, vigorously opposing a provision that would override the right-to-work laws enacted in 27 states, laws that allow workers to opt out of paying union dues. The Senate Republicans’ policy committee has slammed the Pro Act, saying it would undermine worker freedom, “heavily tilt the scales in favor of labor” and “curb workers’ choices, threaten jobs and increase costs on employers”.

It wasn’t always this way. Two decades ago, there were 30 union-friendly Republicans in the House, but that number has dwindled to a handful, partly because many of the party’s billionaire and corporate donors frown on pro-union Republicans. These donors see unions as bothersome institutions that favor Democrats and reduce corporate profits. Indeed, many Republican lawmakers treat unions and their leaders as enemies.

Virginia Foxx, the senior Republican on the House Education and Labor Committee, scoffed at the idea that there is a union resurgence and said Democrats “are in the pocket of Big Labor”. “Unions are hitting the panic button and praying that Democrats can gin up a PR campaign to cover up the declining numbers and lack of interest in union membership,” Foxx told the Guardian, noting that union membership has sunk to just 6% of the private-sector workforce. Foxx, who often serves as Congress’s chief spokesperson on labor matters, belittled unions’ recent gains, saying that only a tiny percentage of Starbucks and Apple stores have been unionized.

Foxx, a nine-term House member from North Carolina, said: “If Democrats genuinely believe that union popularity is soaring and that union campaigns and strikes are resonating with American workers, then they truly have a tortured relationship with both math and reality.”

Even as the National Labor Relations Board (NLRB) reported a 53% jump over the past year in the number of workplace petitions for union elections, Foxx and many other Republicans are backing bills that would make it harder to unionize. With corporations prohibiting union organizers from setting foot on company property to speak with workers, unions rely on NLRB rules requiring employers to give them workers’ home addresses, phone numbers and email addresses so they can communicate with them. But the Employee Privacy Protection Act, a Republican-sponsored bill re-introduced last March, shortly after the recent union surge began, would limit unions to obtaining just one of those three ways to contact workers. Foxx said workers should “never have to hand over their personal contact information” to “a union to which they object”.

Bill Samuel, legislative director of the AFL-CIO, the nation’s main union federation, said he has seen no sign of Republicans warming up to unions despite their increased popularity – 71% of Americans approve of unions. “I haven’t seen any change” among Republicans, Samuel said. “There’s been no outreach. We haven’t been getting calls from Republicans asking, ‘How can we help workers organize?’”

Bobby Scott, a Virginia Democrat who is chairman of the House education and labor committee, agreed, adding: “Republicans are pretty much as hostile as ever toward unions – pretty much down the line.”

Scott said Democrats should rush to enact the Pro Act in light of the many daunting obstacles that workers face in seeking to unionize at Starbucks, Amazon and other companies due to intense corporate opposition and a flurry of alleged illegalities by management. In Scott’s view, especially important is a provision that would for the first time allow the NLRB to impose substantial fines against companies that violate the law when battling union drives. “The biggest improvement we need is to have some meaningful sanctions for unfair labor practices,” Scott said. “Right now, there is no meaningful deterrent.”

Oren Cass, executive director of American Compass, a thinktank for conservative economics, said that many Republicans have grown more interested in worker issues. Cass acknowledged, however, that most Republican lawmakers remain hostile to organized labor because “unions are predominantly financing mechanisms for the Democratic party.”

He said some Republicans are open to the idea of increasing worker power, but only if it’s done largely outside the framework of traditional unions. Nevertheless, whether with or without unions, hardly any Republicans are pushing to expand worker power – an idea that would irk corporate Republicans. Many GOP lawmakers instead emphasize worker choice and worker freedom – part of their decades-long effort to enact state right-to-work laws that allow workers to opt out of paying any dues or fees to the unions that represent them.

Senator Rand Paul of Kentucky and Representative Joe Wilson of South Carolina are co-sponsoring the National Right to Work Act, which would let workers in all 50 states opt out of union dues. Wilson told the Guardian that the bill would “eliminate forced-dues clauses” and “allow workers to choose for themselves”. He said Joe Biden and the Democrats were on “a mission to force unionization” on “workers by eliminating employee choice”. Senator Paul said their bill would “put bargaining power where it belongs, in the hands of American workers”. Unions assert, however, that workers have far more bargaining power by bargaining collectively, rather than as individuals.

Cass, who worked in Mitt Romney’s 2012 presidential campaign, supports steps to give workers more power and said it’s a good time for Republicans to push to increase worker power. Their “constituents are significantly and increasingly working class”, Cass noted, adding that Republicans might be more willing to distance themselves from corporations now that more business executives “are on the other side”, having endorsed Democrats.

For years, most Republicans lawmakers have opposed any increase in the NLRB’s budget; that agency oversees private-sector union elections and cracks down on employers that break the law in fighting unions. The labor board’s budget hasn’t increased since 2014, a budget freeze that has angered union leaders because they say it hampers the board’s ability to move quickly against law-breaking, anti-union employers.

“The NLRB has been flat-funded for a long time,” said Scott, chair of the House labor committee. “With the popularity of unions increasing, the work of the NLRB has increased. In order to get their work done, the board needs significant increases in funding.”

But Foxx called increasing NLRB funding “an inherently stupid idea”, asserting that the labor board tilts in favor of unions, just as Democrats asserted that President Trump’s labor board was far too anti-union.

The AFL-CIO’s Samuel voiced dismay that many Republicans seem implacably opposed to anything that would help unions expand. “All this,” Samuel said, “illustrates their hostility to make it easier for workers to enjoy what is supposed to be their basic right under the law: to come together to form a union.”