Widening the Tent for a Multiracial Labor Movement

Since the early 1900s and before, Black workers have not viewed labor unions and labor organizing as separate from the rest of their lives and have fought for union politics that reflect that understanding. 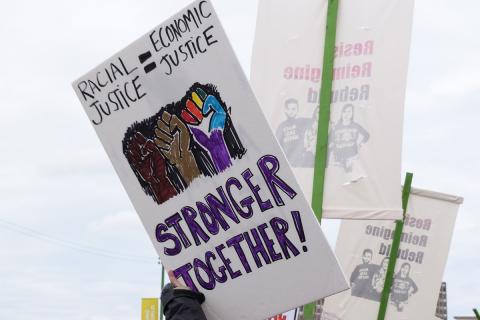 Labor unions and other groups rally outside the Cook County Juvenile Center on May 1, 2017., Yingxu Jane Hao

I grew up in Detroit in the 1960s and ’70s, which is to say, I grew up in a union town. My father, Charlie Ransby, did backbreaking work most of his life and was a lifelong union member. He worked in a small plant that cleaned industrial gloves for the Big Three auto companies (GM, Ford and Chrysler). His life was hard, but he was clear it would have been a lot harder if he and his co-workers were not organized.

My mother, Ethel Ransby, worked most of her life as a maid, and for a time as a home health worker. And if the agency she worked for had been unionized in the early 1960s, she would have likely been an SEIU member, or certainly a member of the mighty National Domestic Workers Union.

I remember something my father told me about the labor movement when I was a child. The first time a white man ever called him “brother” was in a union meeting, which was the first time he experienced any kind of camaraderie that transcended race. For a Black man from the Jim Crow South, that was a big deal. Of course, the labor movement has had its share of problems, including racism, sexism, myopic nationalism/nativism and the list goes on. But, since the founding of the Brotherhood of Sleeping Car Porters in 1925, Black workers have been a part of the U.S. labor movement, struggling against the racism within it while simultaneously fighting for the larger aims of rights, justice and fairness for this country’s working class.

As the black lesbian poet Audre Lorde once wrote: “We cannot build single issue movements because we do not live single issue lives.” Since the early 1900s and before, Black workers have not viewed labor unions and labor organizing as separate from the rest of their lives and have fought for union politics that reflect that understanding.

When I think of the progressive choices that labor unions and labor organizers and leaders have made over the years, I am reminded of the fact that the 1963 March on Washington, the most famous civil rights march in U.S. history, was also a labor march. It was the “March for Jobs and Freedom.” And many labor unions threw their weight and resources behind it, despite criticisms and grumbling from some of their white rank-and-file members. They did the right thing and they stood on the right side of history.

And then there is the famous Memphis sanitation strike of 1968. In some ways it was the ‘Black Lives Matter’ campaign of its day because the black working class of Memphis felt disenfranchised as citizens, discriminated against as consumers, and finally, cheated and disrespected as workers. And when the Rev. Martin Luther King Jr. came to town, to the place where he ultimately loss his life, all of these issues were on the table—not just the narrowly defined labor demands of the sanitation workers. The “I am a MAN” signs that were ubiquitous during the strike and protests in Memphis were not primarily an assertion of gender bias, they were an insistence on the value of Black life. The primarily male sanitation workforce was saying we are men (human beings) not ‘garbage,’ which is how they felt they were treated on and off the job.

There are two critical issues that many working-class communities of color have been organizing around that the labor movement overall has to work harder to address: 1) immigration rights and the plight of undocumented workers, and 2) the struggle against police violence that the Movement for Black Lives has been waging.

First of all, immigrants are overwhelmingly workers. And the most vulnerable undocumented immigrants are disproportionately Black and Brown people. They face intimidation, harassment and super-exploitation because employers assume they have no recourse.

Moreover, low-wage workers are much more likely to be sucked into the underground economy, not because they are bad people, but because they are forced to hustle to survive. And the ways in which poor people hustle are deemed illegal and the ways that rich people hustle are more often than not rewarded. Moreover our skewed cash bail system leads to many plea bargain situations that mean more low-wage workers and unemployed folks get criminal convictions because they “plea rather than pay” to get out of jail. Racial profiling adds to the problem. It is therefore not surprising that some of the most high profile cases of police violence represent not only examples of crude and undisguised racism, but also involve issues of economic vulnerability and marginality.

So, immigration is a labor issue. The struggle against police violence and prisons is a labor issue. Anti-racism is a labor issue. And finally, women workers, especially women of color, often suffer the most and fight the hardest. Sexism, homophobia and gender equity in the workplace also have to be labor issues. All of this has to factor into a progressive agenda for the labor movement. The two unions in Chicago I have seen address the issues of race, gender and immigration with the most integrity have been SEIU and the Chicago Teacher’s Union, both with room to grow.

For all of these reasons, and in honor of the Black working-class family that raised me right, I will be supporting two actions today: The Fight for 15 strike for a living wage for low-wage workers, and BYP100’s “Honor Her Labor” rally in Chicago.

This commentary originally appeared in The Chicago Reporter. The Reporter has investigated race, poverty and income inequality since 1972.